Earl Louis "Curly" Lambeau (April 9, 1898 – June 1, 1965) was founder, player, and first coach of the Green Bay Packers professional American football team. He shares the distinction with rival George Halas of the Chicago Bears of coaching his team to the most NFL championships, with six.

Lambeau was a standout multi-sport athlete at Green Bay East High School, and captain of its football team as a senior in 1917. Lambeau then played for legendary coach Knute Rockne at Notre Dame in 1918, making the Irish's varsity squad as a freshman, but a severe case of tonsillitis forced him to return home before his sophomore year.[1]

Lambeau and George Whitney Calhoun formed the Green Bay Packers on August 11, 1919, while Lambeau was working as a shipping clerk at the Indian Packing Company. The Packers initially played teams from Wisconsin and Michigan's Upper Peninsula; however, the success of the team in 1919-20 quickly led to its joining of the American Professional Football Association, with the league changing its name to the National Football League in 1922.

Career as a coach

In 1946, Lambeau purchased Rockwood Lodge, creating the first self-contained training facility in professional football. The purchase was controversial among the Packers' board of directors, and Lambeau's deteriorating relationship with the board was one of the factors that would lead to his departure in early 1950.[2] In addition, Lambeau's record as a coach had dropped sharply after Hall of Fame receiver Don Hutson retired in 1945.

Lambeau was married three times, first to Marguerite Van Kessel from 1919 ending in divorce with one son in 1934. His second wife Susan Johnson was a former Miss California. They were married from 1935 to 1940. He married Grace Garland in 1945 and was divorced in 1955.

Lambeau died of a heart attack in Sturgeon Bay, Wisconsin, while visiting a friend.[3] 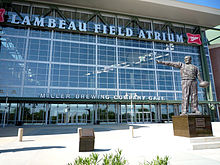 The Packers' stadium, Lambeau Field in Green Bay, is named after Curly Lambeau. The venue opened in 1957, informally called "New" City Stadium for its first eight years. It was renamed "Lambeau Field" in September 1965, after Lambeau's death.

Erected after the stadium's 2003 renovation, a 14-foot statue of Lambeau greets visitors.

Among other things, Lambeau is credited with pioneering daily practices, the forward pass in the NFL, implementing pass patterns and flying to road games.[2]

Lambeau was elected to the Wisconsin Athletic Hall of Fame in 1961.

Lambeau was inducted into the Pro Football Hall of Fame's inaugural class in 1963.