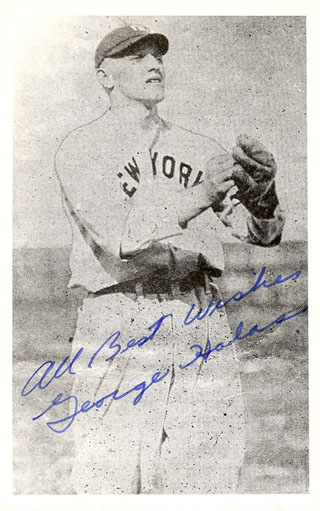 George Stanley Halas, Sr. ( &ndash; ), nicknamed "Papa Bear" and "Mr. Everything", was an American player, coach, owner and pioneer in professional football and the iconic longtime leader of the NFL's .

Halas, born in into a family of Hungarian immigrants, had a varied career in s. His name means Fischer in Hungarian. In 1915, Halas worked temporarily for Western Electric and was planning on being on the "". He was running late, however, and missed the capsizing. After graduating from in Chicago, he attended the University of Illinois, playing football for coach as well as and , and earning a degree in civil engineering. He also became a member of fraternity. He helped Illinois win the 1918 Big Ten football title.

Serving as an ensign in the Navy during , he played for a team at the , and was named the MVP of the 1919 Rose Bowl. On a team which included and , Halas scored two touchdowns and returned an intercepted pass 77 yards in a 17-0 win; the team was also rewarded with their military discharges.

Afterward, Halas played minor league and semi-pro baseball, eventually earning a promotion to the , where he played 12 games as an in 1919. However, a hip injury effectively ended his baseball career. The popular myth was that Halas was succeeded as the Yankees' by , but in reality Ruth replaced Sammy Vick.

Offered a position with the A. E. Staley Company, a starch manufacturer, as a company representative, player on the company-sponsored baseball team, and player-coach of the company-sponsored football team, Halas selected his alma mater's colors &mdash; orange and navy blue &mdash; for the team's uniforms. In 1920, Halas represented the Staleys at the meeting which formed the American Professional Football Association (which became the NFL in 1922) in .

After suffering financial losses despite a 10-1-2 record, company founder and namesake Augustus E. Staley turned control of the team to Halas in 1921. Halas moved the team to and took on teammate Dutch Sternaman as a partner. The newly minted "Chicago Staleys" won the NFL championship that year. They took the name Bears in 1922 as a tribute to baseball's , who permitted the Bears to play their games at .

Halas not only played end (wide receiver on offense, defensive end on defense) but also handled ticket sales and the business of running the club; lore says he even sold tickets before the game. All of that perhaps not being enough to do, Halas also coached the team. Named to the NFL's all-pro team in the 1920s, his playing highlight occurred in a 1923 game when he stripped of the ball, recovered the fumble, and returned it 98 yards &mdash; a league record which would stand until 1972. In 1925, Halas persuaded Illinois star player to join the Bears; it was a significant step in establishing both the respectability and popularity of the league, which had previously been viewed as a refuge for less admirable players.

After ten seasons, Halas stepped back from the game in 1930, retiring as a player and leaving the sidelines as coach; but he remained the owner of the club, becoming sole owner in 1932. The lure of the field was too much, however, as Halas returned in 1933 to coach the Bears for another ten seasons. During his absence from coaching, the team had also won the 1932 championship. His 1934 team was undefeated until a loss in the championship game to the .

In the late 1930s, Halas &mdash; with coach &mdash; perfected the system to create a revolutionary and overwhelming style of play which drove the Bears to an astonishing 73-0 victory over the in the 1940 NFL Championship Game. Every other team in the league immediately began trying to imitate the format. The Bears repeated as NFL champions in 1941, and the 1940s would be remembered as the era of the "Monsters of the Midway."

Halas and Shaughnessy had created a revolutionary concept with the T-formation offense. The complex spins, turns, fakes, and all around athletic versatility required to execute the scheme, limited the possible players available. Halas recruited Columbia University quarterback in 1939. Luckman launched his Hall of Fame career, playing the position from 1939 to 1950. Halas was not satisfied with other players who succeeded Luckman. During this coaching stint, he had on the Bears roster two future Hall of Fame players, in 1948 and from 1949 to 1958. Other notable players included winner from 1948 to 1951 and from 1954 to 1960. Blanda played in the NFL until 1975; Bratkowski moved on to 's from 1960 to 1971; and Bobby Layne quarterbacked the to three NFL championship games between 1952-54, winning two.

Halas went on a second three-year hiatus during , serving in the Armed Forces from 1943-45, while the Bears won another title in 1943. Returning to the field in 1946, he coached the club for a third decade, again winning a title in his first year back as coach. After a brief break in 1956-57, he resumed the controls of the club for a final decade from 1958 to 1967, winning his last championship in 1963. He did not, however, enjoy the same success as he had before the war. He did win his 200th game in 1950 and his 300th game in 1965, becoming the first coach to reach both milestones. In 40 years as a coach, he endured only six losing seasons.

After the 1967 season, Halas &mdash; then the oldest coach in league history &mdash; retired as coach. He continued as the team's principal owner, and took an active role in team operations until his death. He was honored in 1970 and 1980 as the only person involved in the league throughout its first fifty and sixty years of existence. His son George, Jr. served as president of the Bears from 1963 until his sudden death at age 54 in 1979. One of Halas's final significant ownership acts was to hire as head coach in 1982 (Ditka was a former Halas player in the 1960's).

In the 1971 made-for-television film "", about the friendship between Chicago Bears players and , Halas was portrayed by , who won an for his performance.

Halas died of in Chicago on at age 88, and is entombed in St. Adalbert Catholic Cemetery in . His eldest daughter, , succeeded him as majority owner (even though her sons run the team's day-to-day operations). In the 1985 season when the Bears won their first ever Super Bowl, they recorded a song called "." In the song, backup quarterback Steve Fuller states "This is for Mike [then current coach ] and Papa Bear Halas."

Halas played an integral part in the segregation of the league in the 1930s by refusing to sign black players for the Bears. , who in the 1920s was the league's first African-American coach, blamed Halas for keeping him out of the league in the 1930s and 1940s. Halas eventually changed course and helped to integrate the league, drafting the NFL's first black player since 1933, , although Taliaferro did not play for the Bears; Halas later signed , who with the Bears became the league's first black quarterback. A pioneer both on and off the field, Halas made the Bears the first team to hold daily practice sessions, to analyze of opponents to find weaknesses and means of attack, place assistant coaches in the press box during games, and to broadcast games by . He also offered to share the team's substantial income with teams in smaller cities, firmly believing that what was good for the league would ultimately benefit his own team. A firm disciplinarian, Halas maintained complete control of his team and did not tolerate disobedience and insubordination by players. He also insisted on absolute integrity and honesty in management, believing that a handshake was sufficient to finalize a deal; few, if any, intermediaries were necessary.

George Halas' career ledger reads as follows: 63 years as an owner, 40 as a coach, 324 wins, and 8 NFL titles as a coach or owner. He was a charter member of the in 1963; the Hall of Fame is appropriately located on George Halas Drive. The NFC championship trophy also bears his name. In both 1963 and 1965 he was selected by "", the AP and the UPI as the NFL Coach of the Year. In 1997 he was featured on a U.S. postage stamp as one of the legendary coaches of football. He has been recognized by as one of the ten most influential people in sports in the 20th century, and as one of the greatest coaches. In 1993, coach finally surpassed Halas' victory total. To this day, the jerseys of the Chicago Bears bear the initials "GSH" on their left sleeves in tribute to Halas.