Cheshire Cat
This article is about a character in Alice's Adventures in Wonderland. For other uses, see Cheshire Cat (disambiguation).

/ˈtʃɛʃər/ or /ˈtʃɛʃɪər/) is a fictional cat popularised by Lewis Carroll's depiction of it in Alice's Adventures in Wonderland. Known for his distinctive mischievous grin, the Cheshire Cat has had a notable impact on popular culture.

The phrase appears in print in John Wolcot's pseudonymous Peter Pindar's Pair of Lyric Epistles in 1792: "Lo, like a Cheshire cat our court will grin." Earlier than that, A classical dictionary of the vulgar tongue by Francis Grose (The Second Edition, Corrected and Enlarged, London 1788) contains the following entry: "CHESHIRE CAT. He grins like a Cheshire cat; said of any one who shows his teeth and gums in laughing.".

A possible origin of the phrase "Grinning like a Cheshire Cat" is from the large number of dairy farms in Cheshire, hence the cats grin because of all the milk and cream that is available. This is the explanation most favoured by the people of Cheshire.[1]

Brewer's Dictionary of Phrase and Fable says grinning like a Cheshire cat is "an old simile, popularised by Lewis Carroll". According to Brewer's dictionary, "The phrase has never been satisfactorily accounted for, but it has been said that cheese was formerly sold in Cheshire moulded like a cat that looked as though it was grinning".[2] The cheese was cut from the tail end, so that the last part eaten was the head of the smiling cat.[citation needed] 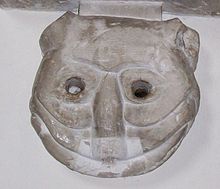 There are many reports that Carroll found inspiration for the name and expression of the Cheshire Cat in the 16th century sandstone carving of a grinning cat, on the west face of St. Wilfrid's Church tower in Grappenhall, a village adjacent to his birthplace — in Warrington, Cheshire.

Others[who?] have attributed it to a gargoyle found on a pillar in St. Nicolas Church, Cranleigh, where Carroll used to travel frequently when he lived in Guildford (though this is doubtful as he moved to Guildford some three years after Alice's Adventures in Wonderland had been published) and a carving in a church in the village of Croft-on-Tees, in the north east of England, where his father had been rector.

St. Christopher's church in Pott Shrigley, Cheshire, is believed to have been visited by Carroll and has a stone sculpture most closely resembling the pictorial cat in the book.

Alice first encounters it at the Duchess's house in her kitchen, and then later outside on the branches of a tree, where it appears and disappears at will, engaging Alice in amusing but sometimes vexing conversation. The cat sometimes raises philosophical points that annoy or baffle Alice. It does, however, appear to cheer her up when it turns up suddenly at the Queen of Hearts' croquet field, and when sentenced to death baffles everyone by having made its head appear without its body, sparking a massive argument between the executioner and the King and Queen of Hearts about whether something that does not have a body can indeed be beheaded.

At one point, the cat disappears gradually until nothing is left but its grin, prompting Alice to remark that she has often seen a cat without a grin but never a grin without a cat.[3]

The Cheshire Cat is one of many iconic characters depicted in Alice's Adventures in Wonderland that have become enmeshed in popular culture,[4] appearing in various forms of media, from political cartoons to television.[5][6] One of its distinguishing features is that from time to time it disappears, the last thing to be seen being its grin.

The Cheshire Cat as depicted in American McGee's Alice