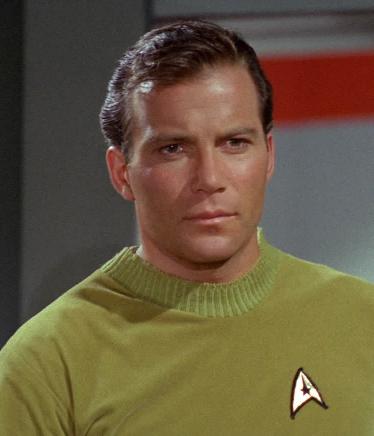 
James Tiberius Kirk is a in the universe. He is the lead character in the original "" television series, , and appears in the first nine feature films.

Canadian actor portrayed the character in the forty years since its inception. Producer announced that had been cast in the role of Kirk in the "Star Trek" film, [Cite news|url=http://www.trektoday.com/news/151007_01.shtml|title=Chris Pine Drops Out Of 'White Jazz' For Kirk Role|date=|publisher=TrekToday|accessdate=2007-10-16] marking the first time that an actor other than Shatner will portray the character in an official production.

Kirk was born and raised in , the son of George Samuel Kirk, Sr. and Winona Kirk. His brother and sister-in-law are introduced and killed in "", leaving behind a son and, according to "", two other children. 's novels "Final Frontier" and "Best Destiny" portray parts of George Kirk's career in and also, in the latter, James Kirk's adolescence. At , Kirk became the first person to beat the "" simulation by rewriting the program to make it possible to survive the "no-win" scenario. He received a field commission as an ensign and posted to the USS "Republic", then was promoted to lieutenant junior grade and returned to Starfleet Academy as a student instructor. Gary Mitchell (), then one of Kirk's students, remarks in "" that one could either "think or sink" in Kirk's course. Upon graduation in the top five percent of his class, Kirk was promoted to lieutenant and served aboard the USS "Farragut". Having risen rapidly through the ranks after leaving the Academy, Kirk received his first command while still quite young.

At the age of 31, Kirk received command of the USS "Enterprise"; "Star Trek" and the animated spin-off take place during the ship's five-year mission "to boldly go ". Kirk's notable relationships among his crew in the television series are with first officer () and chief medical officer Leonard "Bones" McCoy ().

Kirk is a , having been married in "" to Miramanee (Sabrina Scharf), who dies carrying his child. In the novelization of "The Motion Picture", Kirk's wife, Admiral Lori Ciana, dies in a transporter accident. [cite book|title=Star Trek: The Motion Picture|first=Gene|last=Roddenberry|authorlink=Gene Roddenberry|publisher=|year=1978|isbn=978-0671830885] "Star Trek II" reveals that Kirk fathered a son, David Marcus (), with Dr. Carol Marcus (). s kill David on the Genesis Planet in "Star Trek III". Kirk says in "Star Trek VI" that David's murder affected his ability to trust Klingons; he held them collectively responsible for David's death, but sets aside this prejudice at the movie's conclusion.

In "", Kirk goes missing and is presumed dead when the USS "Enterprise"-B is damaged. Instead, however, he is transported to the timeless Nexus. () finds Kirk and convinces him to leave the Nexus to help stop Tolian Soran's () attempt to destroy a star. Kirk enables Picard to sabotage Soran's plans, but plummets with a collapsing bridge span. He dies shortly thereafter. As originally filmed, Soran killed Kirk by shooting him in the back; this scene was changed after negative reactions from test audiences. [cite book|title=Star Trek Movie Memories |first=William|last=Shatner|authorlink=William Shatner|isbn=978-0006384168|date=1994-11-28|publisher=] [cite web|url=http://www.dvdactive.com/reviews/dvd/star-trek-generations-special-edition.html|publisher=DVDActive.com|first=Brett|last=Anderson|date=2004-11-20|accessdate=2008-05-10|title= 'Star Trek: Generations-Special Edition' DVD Review]

In books written by William Shatner, beginning with "", Kirk is returned to life by the and the Borg, and goes on to have further adventures.

The debut of "" brought with it comparisons of Kirk's and Picard's leadership styles. Kirk is deemed to be very able to find ways "through unanticipated problems to reach [his] goals" and his leadership style is most "appropriate in a tight, geographically identical team with a culture of strong leadership."

Riverside petitioned Gene Roddenberry and in for permission to "adopt" Kirk as their town's "Future Son". [cite web |url=http://www.roadsideamerica.com/story/2081 |title="Future Birthplace of James T. Kirk" |accessdate=2008-09-09|first=Doug|last=Kirby|coauthors=Ken Smith and Mike Wilkins|publisher=Roadside America] Paramount Pictures wanted $40,000 for a license to reproduce a bust of Kirk, but the city passed on that option, instead using the plaque and the building of a replica of the "Enterprise" (renamed the "USS Riverside") and The Riverside Area Community Club holds an annual "Trek Fest" in anticipation of Kirk's birth. [cite news |first=Beverly |last=Beyette |title="A happy future birthplace hooks up with Capt. Kirk" |url=http://www.chicagotribune.com/travel/chi-gun1l2ebd.21may15,0,6903055.story|publisher=|date=2005-05-15|accessdate=2008-09-09]