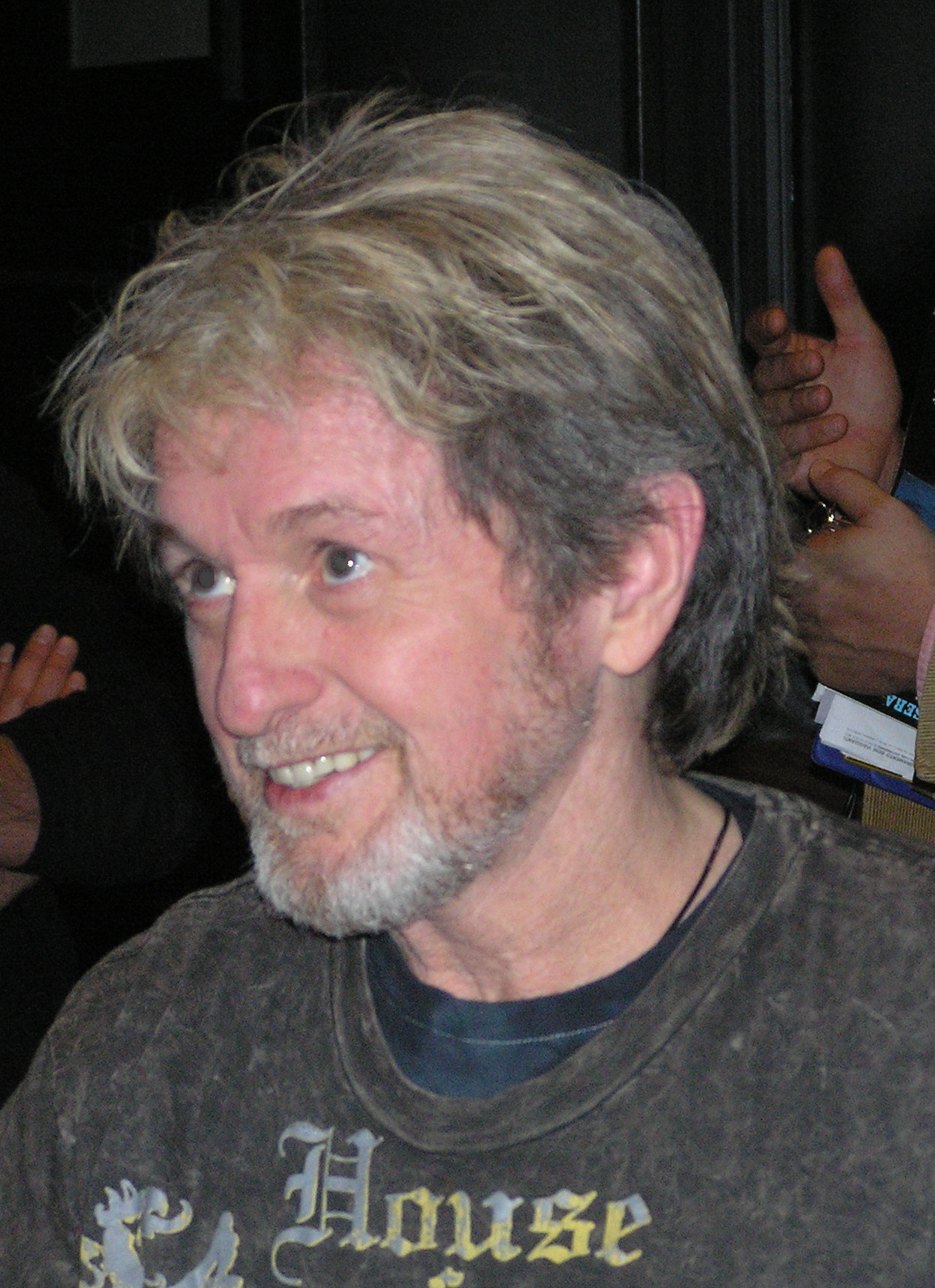 Jon Anderson was born in the town of , , , in a family of Irish ancestry, his parents being Albert and Kathleen Anderson.

He attended St. John's Infants School in , and made a tentative start to his musical career at an early age by playing the in "Little John's Group", which played songs by among others. Anderson left school at the age of fifteen, and went through a series of jobs including working as a farm hand, lorry driver, and a milkman. He also tried to pursue a football career in the club he is still a fan of, , but he was eventually turned down because of his frail constitution.

In 1962, Anderson joined The Warriors (also known as The Electric Warriors)

In the summer of 1968, Anderson met and joined him in a group called Mabel Greer's Toyshop, which had previously included . Anderson fronted this band, but ended up leaving again before the summer was over. He remarks on his website that his time with the band consisted of "too many drugs, not enough fun!".

Anderson, Squire, and Banks went on to form Yes, with and Tony Kaye. Their debut album was released in 1969. He stayed with the group until 1980, and this period is now known as the classic period of Yes. Jon was a major creative force and band leader throughout the period (describing himself as the 'team captain'; nicknamed by his bandmates "Napoleon")-- and is recognized as the main instigator of the series of epics produced by Yes at the time. His role in creating such complex pieces as "", "Awaken", and especially "" is central, despite his limited instrumental abilities.Fact|date=December 2007

He rejoined a reformed Yes in 1983 which produced their most commercially successful album "" with newcomer , and departed again in 1988 over the band's continued pursuit of major commercial success and mainstream radio play. In 1989, Anderson and other former Yes members formed the group (ABWH), augmented by bassist who had played with drummer Bill Bruford in . After the successful first ABWH album, a bizarre series of business deals caused ABWH to reunite with the then-current members of Yes, who had been out of the public eye while searching for a new lead singer. The resulting eight-man band assumed the name Yes, and the album "Union" (1991) was assembled from various pieces of an in-progress second ABWH album as well as recordings that "Yes proper" had been working on, without Anderson. A successful tour followed, but the eight-man lineup of Yes never recorded a complete album together before splintering in 1992. Many more personnel changes followed, but Anderson has been with the band ever since. He appears on all Yes albums except their 1980 album "Drama".

Anderson last performed with Yes in 2004. A tour planned for summer 2008 with Anderson was cancelled when he suffered acute respiratory failure. The band have since announced a tour without him and he has been replaced by Benoit David [http://www.yesworld.com/ywtour-REVISED.html] , singer in a Yes tribute act Close to the Edge. [http://mog.com/blog_post/content/265/190871]

It is a commonly held misconception that Jon Anderson sings , a vocal technique which artificially produces high, airy notes by using only the ligamentous edges of the vocal cords; however, Jon Anderson does not sing falsetto. His normal singing (and speaking) voice is naturally above the tenor range. In a 2008 interview with the Pittsburgh Post-Gazette, Jon stated, "I'm an alto tenor and I can sing certain high notes, but I could never sing falsetto, so I go and hit them high." [>cite web | url=http://www.post-gazette.com/pg/08066/862775-42.stm | title= Jon Anderson says Yes to the School of Rock | date=2008 |accessdate=2008-05-22]

Anderson is also responsible for most of the mystically-themed lyrics and concepts which are part of many Yes releases. These elements are crucial components of the classic Yes sound, but have occasionally alienated some members of the band (most notably Bruford and ), contributing to their leaving the group. The lyrics are frequently inspired by various books Anderson has enjoyed, from Tolstoy's "" to 's "Siddhartha". A footnote in 's "" inspired an entire double album "" (1973). Recurring themes include environmentalism, pacifism and sun-worship.

In 1970, Anderson sang as a session singer on King Crimson's "Lizard" album, on the track "Prince Rupert Awakes", as it was outside the range of the then Crimson vocalist, Gordon Haskell.

In September 1975, Anderson guested on the album "Heaven and Hell".

When Anderson and Wakeman left Yes early 1980, Anderson started recording again with Vangelis and by summer 1980 had released "", followed in November by Jon's solo album "Song of Seven" and a major UK tour with The New Life Band.

In 1983, Jon worked as vocalist for Mike Oldfield's release of "In High Places" from the album "", and the song "Shine". He has also guested with .

The song "Cage Of Freedom" was also featured on the 1984 soundtrack for the re-release of the classic black and white movie "Metropolis".

In 1985, Anderson's song "This Time it Was Really Right" was featured on the soundtrack for the movie "St. Elmo's Fire". He also sang "Silver Train" and "Christie" on the film soundtrack "Scream for Help".

Also in 1985, along with he recorded the song "Loved by the Sun" for the film "Legend" directed by Ridley Scott.

In 1999 while was recording the song "The Only Thing I Need" for the special multi-group album "Streams", Jon Anderson offerd his assistance as vocalist for the main chorus.

In 2004, Anderson appeared with the of Cleveland. The concert was recorded and released for the orchestra members, but was never publicly released, to the dismay of many concert attendees.

In 2006, "Animation" was finally released on CD but was sourced from a worn vinyl record. The mastering was also poorly done and was overly loud and distorted. The second pressing used a better source although the sound quality still leaves a lot to be desired. Voiceprint denies any differences between pressings, obviously to clear themselves of a free replacement program.

In a 2006 tour, the (East Coast Troupe) got Anderson to appear in 2 concerts on December 16 in Philadelphia, PA to play "Roundabout".

In 2007, Anderson toured with The Paul Green School of Rock Music, finishing the tour with two sold out shows at 's Bar and Grill in New York City.

He also contributed vocals to the new album from American group "Culture of Ascent".

Currently Jon is on tour for a second time with

Jon appears on the new Dream Theater album "Systematic Chaos", as part of a vocal ensemble on the fifth track "Repentance". The album was released on June 5th, 2007.

Jon Anderson's children include daughter (who has done work singing for the French band on the album "Angel Milk", released in summer 2005), (who has released a solo album in Japan) and Damion Anderson (also a musician).

Anderson was a smoker in the 1960s and 70s but now prides himself on a much healthier lifestyle. In the mid 70s, Anderson became a , as did most members of Yes; however in a recent interview he states, "I was a veggie for a while, but again I grew out of that. But I do eat very healthy."

One of Anderson's passions is his painting and uses his art as yet another channel for his creativity and self expression. His artwork is available to view on [http://www.jonanderson.com/ his official website] .

On May 13, 2008, Anderson suffered a severe attack which required a stay in the hospital. According to Yes' website, he is "currently at home and resting comfortably." [ See [http://www.yesworld.com] .] Yes' planned summer 2008 tour was subsequently cancelled, with the press release saying, "Jon Anderson was admitted to the hospital last month after suffering a severe asthma attack. He has now been diagnosed with acute respiratory failure and was told by doctors this weekend that he needs to rest and not work for a period of at least six months or suffer further health complications." [ [http://www.yesworld.com/ywtour-2008-update.html YES cancels 40th anniversary tour] ] According to Anderson's own website he is none to happy that the other members of Yes, White, Squire and Howe have gone out without him. A quote from his site "....disappointed that they were not willing to wait till 2009 when I’m fully recovered.....This is not YES on tour..."