The River Wensum is a chalk fed river [1] in Norfolk, England and a tributary of the River Yare despite being the larger of the two rivers. The complete river is a designated Site of Special Scientific Interest (SSSI) and Special Area of Conservation (SAC).[2] 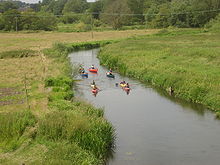 The source of the Wensum lies between the villages of Colkirk and Whissonsett in north-west Norfolk. The river flows westward initially, close to the villages of South Raynham, West Raynham and East Raynham, passing Raynham Hall, home of the Marquis Townshend. The Wensum then turns and flows north through a number of small villages until it reaches Sculthorpe, where it turns east through the market town of Fakenham. The river then flows in a south-easterly direction, passing through the Pensthorpe Nature Reserve and the village of Great Ryburgh.

The Wensum continues through or close to the villages of Guist, North Elmham, Worthing, Swanton Morley, Lyng, Lenwade and Taverham before entering the City of Norwich from the north-west via Drayton, Costessey and Hellesdon. At New Mills Yard, a former waterworks, the river becomes tidal and navigable by boat. Flowing through the city, the river forms a broad arc which would have influenced the site of the settlement for defensive reasons;[citation needed] remnants of boom towers can be seen near Wensum Park and Carrow Hill which formed part of the city wall and a large defensive tower can be seen on the bank near Barrack Street, called Cow Tower. This dates to the 12th century and was also used for collecting tolls.[4] Evidence of the river's historical use as a means of transport for goods and trade from the continent is still visible: mills, quays and industrial remnants can be found near the station and along King Street, and a slipway at Pulls Ferry marks the start of a canal originally used to transport stone from Caen in Normandy, in the 13th Century, to build Norwich Cathedral. This site was also a public house and used as a River Ferry until the 1950s.

The Wensum flows past Carrow Road football ground and then out of the city via Trowse, to Whitlingham where it merges with the River Yare. The river is navigable from the New Mills Yard in the centre of Norwich to its confluence with the Yare. 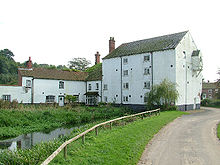 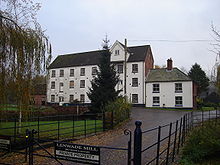 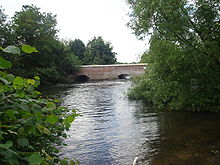 The river below Hellesdon mill

There were a succession of water mills on the Wensum, some of which are still standing and working. From the source these are

Other mills close on tributaries are

Bishop Bridge is one of five medieval bridges which span the River Wensum. Built in 1345 it formed part of the defensive structure along the river, with a gatehouse on the city side of bridge which was demolished in 1791. It is positioned on the site of a Roman Ford.

Fye Bridge is arguably the oldest river crossing in Norwich and is the gate to the North of the City known as “Norwich over the water” this bridge was also the site of a cucking stool for ducking lawbreakers and undesirables.

Whitefriars Bridge Named after a former Carmelite (White Friars) monastery. The remains of which can still be seen in a small section of medieval wall and archway.

Foundry Bridge Near the railway station and the Yacht station on Riverside named after a foundry nearby, purported to have been built to take a railway line.

Carrow Bridge near Carrow Road football ground is a more recent cantilevered swing bridge, which can still be opened to allow large or high vessels through. It is positioned in close proximity to the Boom towers which originally had a chain suspended between them and would have been used as part of the citys defences and as a method of collecting tolls on goods travelling up river from Great Yarmouth.

Novi Sad Friendship Bridge is a cable stayed swing footbridge which spans the River Wensum in Norwich. The structure is named in recognition of the twinning ties between Norwich and Novi Sad in Serbia. The bridge was designed by Buro Happold and commissioned by Norfolk County Council.[5] 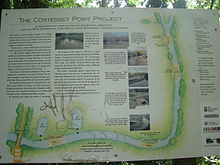 The Costessey Point interpretation board

After many years of decline a survey was commissioned by Natural England in 2002. It showed that the ecological condition of the river had declined. The principal reasons for this were water quality and siltation. Water quality has been addressed and was improving, but the physical character of the river needs to be restored. In 2008, a partnership known as the River Wensum Restoration Strategy (RWRS) was formed between; Environment Agency; Water Management Alliance and Natural England[6] to restore the physical functioning of the Wensum. The 2002 report found that fourteen redundant water mills along the Wensum as having the most significant factor affecting morphology of the river channel, with 67% of the river backed up behind these structures. As a priority, the strategy recommended the lowering, removal or bypassing of these structures to allow more of the river to function naturally.[1] Since 2008, the (RWRS) has made several improvements to the river. The holistic whole river approach with co-operation from land owners, fisheries managers and other organizations has seen ongoing projects ranging from restoring gravel glides to removing silt.[6]

The Norfolk Anglers Conservation Association (NACA) carried out a successful river habitat restoration at their Sayers Meadow fishery at Lyng in the early 1980s.[7] After dredging and a major abstraction pipeline had a detrimental effect on the Costessey Point fishery, the association has taken action to restore this well known water. The ongoing work will be used as a blueprint for future river conservation projects.[8]

Between 1940 and the 1970s the river had a national reputation as a roach fishery with specimens exceeding 3 pounds (1.4 kg) being reported.[9] As the river declined through the effects of abstraction, dredging and modern farming methods these fish largely died out.[1] After an earlier introduction of a small amount of barbel - a fish not indigenous to the Wensum - the local river authority stocked the Wensum with over 150 fish in 1971 below Costessey Mill.[9] and subsequently stocked more fish at suitable sections of the Upper Wensum.[7] The fish became established albeit in small numbers at a few favourable locations. Specimens in excess of 20 pounds (9.1 kg) have been caught[10] with a specimen of 21 pounds 2 ounces (9.6 kg) landed in November, 2008 from the Norfolk Anglers' Conservation Association (NACA) fishery at Lyng.[11]

Today (2011), much of the Wensum's upper reaches are privately owned or controlled by syndicates. However, opportunities for individual anglers can be found and as the river passes through the City of Norwich free fishing is available where accessible.