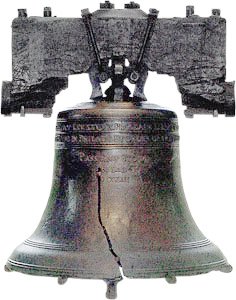 The Liberty Bell, in , , is a bell that has served as one of the most prominent symbols of the . It is a familiar symbol of independence within the United States and has been described as an icon of liberty and justice.

According to tradition, its most famous ringing occurred on , , to summon citizens of Philadelphia for the reading of the Declaration of Independence. The bell had also been rung to announce the opening of the in 1774 and after the in 1775. Historians today consider this highly doubtful, as the steeple in which the bell was hung had deteriorated significantly by that time.

The Liberty Bell was known as the "Independence Bell" or the "Old Yankee's Bell" until 1837, when it was adopted by the as a symbol of the ist movement.

=Inscription= The inscription on the Liberty Bell reads as follows: Cquote|"Proclaim LIBERTY throughout all the Land unto all the Inhabitants thereof Lev. XXV X"
"By Order of the ASSEMBLY of the Province of PENSYLVANIA for the State House in Philada"
"Pass and Stow"
"Philada"
"MDCCLIII"

The bell was ordered in 1745 or 1751 by the for use in the Pennsylvania State House (now known as Independence Hall) in Philadelphia. It was cast by the in and delivered to Philadelphia in late August/early September 1752 via the ship "Hibernia". It cost £100, weighed 2,080 lbs, is twelve feet in the lip circumference, and three feet from the lip to the top. The following March, the bell was hung from temporary ing in the square outside the State House. To the dismay of onlookers, the bell cracked during testing. Isaac Norris, speaker of the Pennsylvania Assembly, wrote "I had the mortification to hear that it was cracked by a stroke of the clapper without any other viollencesic as it was hung up to try the sound."

While a replacement from Whitechapel was ordered, the bell was recast by John Dock Pass and John Stow of Philadelphia, whose surnames appear inscribed on the bell. Pass and Stow added copper to the composition of the alloy used to cast the bell, and the tone of the bell proved unsatisfactory. The two recast the bell yet again, restoring the correct balance of metal, and this third bell was hung in the steeple of the State House in June 1753.

The American War of Independence

Tradition holds that the bell was rung to announce the opening of the in 1774 and after the in 1775.

After Washington's defeat at the on , , the revolutionary capital of Philadelphia was defenseless, and the city prepared for what was seen as an inevitable British attack on the city. The ordered that eleven bells, including the State House bell and the bells from Christ Church and St. Peter's Church, be taken down and removed from the city to prevent the British, who might melt the bells down to cast into cannons, from taking possession of them. A train of over 700 wagons, guarded by 200 cavalry from North Carolina and Virginia and under the command of Colonel Thomas Polk of the 4th Regiment North Carolina Continental Line, left Philadelphia for Bethlehem, in the . Hidden in the manure and hay were the bells, and hidden in the wagon of Northampton County militia private John Jacob Mickley was the State House bell. On , the entourage and armed escort arrived in Richland Township (present-day Quakertown, ). On , the bishop of the in Bethlehem reported that the wagons had arrived, and all bells except the State House bell had been moved to Northampton-Towne (present-day Allentown, ). The following day, the State House bell was transferred to the wagon of Frederick Leaser and taken to the historic Zion's Reformed Church in center city Allentown, where it was stored (along with the other bells), under the floorboards. On , British forces marched into Philadelphia, unopposed, and occupied the city. The bell was restored to Philadelphia in June of 1778, after the end of the British occupation.

In 1839, William Lloyd Garrison's anti-slavery publication "" reprinted a Boston abolitionist pamphlet containing a poem about the Bell, entitled, "The Liberty Bell," which represents the first known usage (in print) of the name, "Liberty Bell."

It is not certain when the second crack appeared (the first after the recastings), but the bell was repaired in February 1846. The method of repair, known as stop drilling, required drilling along the hairline crack so that the sides of the fracture would not reverberate.

On , , the bell was tolled for several hours in the tower of Independence Hall in honor of 's birthday.

In 1852, the bell was removed from its steeple, and put on display in the "Declaration Chamber" of Independence Hall. In the meantime, a "Centennial Bell" replica was given as a gift to Philadelphia in 1876. The bell was cast by Meneely & Kimberly, a Troy, New York, bell foundry in June 1876. A third bell hangs in a modern tower nearby. Cast at the same British foundry as the original, this replica, called the Bicentennial Bell, was given to the people of the United States by Queen Elizabeth II of Great Britain during a visit to Philadelphia in 1976.

From 1885-1915, the Liberty Bell traveled to numerous cities and was displayed at expositions and s.

In 1902, the Liberty Bell was involved in a train accident when the locomotive transporting the bell to an exposition in derailed after a collision with another train. In November 1915, the bell took its last nationwide tour while returning from the Panama-Pacific International Exposition in .

On , , in anticipation of increased visitation during the bicentennial year of American independence, the Liberty Bell was relocated from Independence Hall to a glass pavilion one block north (at the southwest corner of 5th and Market Streets, about 100 yards). This small, unadorned pavilion proved somewhat unpopular with many visitors and this led to the idea of having a larger pavilion created, which finally opened in 2003. At this smaller pavilion, people were able to walk up to and even touch the bell, an activity prohibited at the new site. of Great Britain visited Philadelphia in 1976 and presented a gift to the American people of a replica "Bicentennial Bell", cast in the same British foundry as the original. This 1976 bell now hangs in the Independence Living History Center near Independence Hall.

That same year, a group of 30 demonstrators from the Procrastinator's Society of America turned out before the Whitechapel Foundry in London where they "...mounted a mock protest over the bell's defects and ... marched up and down ... with placards proclaiming WE GOT A LEMON and WHAT ABOUT THE WARRANTY?" The Whitechapel Foundry told the protesters that they "...would be happy to replace the bell — as long as it was returned to us in its original packaging."

On , , the chain took out a full-page advertisement in "" and "" announcing that they had purchased the bell to "reduce the country's debt" and renamed it to "the ". Thousands of people who did not immediately get the hoax protested.

On , , the Liberty Bell was struck several times with a hammer by Mitchell Guilliatt, a self-described wanderer from . He hit the bell four times while shouting "God lives!"

In October 2003, the bell was moved a short distance southwest to a new pavilion, the Liberty Bell Center. There was some controversy about the site chosen for the new structure, which was just to the south of the site of where George Washington had lived in the 1790s. After the initial planning, the building's site was found to be adjacent to the quarters for the slaves owned by Washington. The decision over how to acknowledge this fact in the display has led to some debate.

As of 2006, the bell remains in this location at the northeast corner of 6th and Chestnut Streets. The new is located two blocks to the north, and Independence Hall is located directly across the street, on the south side of Chestnut Street between 5th and 6th Streets. The Bell's former pavilion at the southwest corner of 5th and Market Streets was up for purchase after the move in an effort to reduce demolition costs, but after the auction drew little response, it was converted into a security station that screens tourists traveling in and around Independence Mall. The pavilion was removed from the site in March 2006.

The Liberty Bell Center, with its storied bell, and the nearby Independence Hall, are part of , administered by the .

The Liberty Bell Center is open daily with the exception of from 9:00 a.m. - 5:00 p.m. with extended hours of operation during the summer months. No tickets are required; however, visitors must submit to a security checkpoint before entering, similar to security at a U.S. airport. Over two million tourists visit the bell per year.

Replicas of the Liberty Bell and other bells

One replica of the Liberty Bell is the , which was cast in the early 1860s, and is located in Mount Morris, .

As part of the Liberty Bell Savings Bonds drive in 1950, replicas were ordered by the United States Department of the Treasury and were cast in . The purpose of the bells was to be transported around each state to drum up support for the purchase of savings bonds. After the bond drive was completed, the replicas were given to each state, as well as Alaska and Hawaii (which were not yet states), Washington D.C., Puerto Rico and the Virgin Islands. Many of the bells today are in the state capitols. [Flynn, Lona. "Freedom Bells" (pamphlet based on information presented to the New York State Education Department on September 12, 1996, by Lona Flynn, Cicero Town Historian)]

Outside of the United States, replicas of the Liberty Bell can be found in , , , and .

The Liberty Bell in was inspired by the American Liberty Bell, although it is not a replica, but a distinct bell. It was given as a gift from Americans to the city of Berlin, as a symbol of the fight for and against in in 1950.

The replacement bell ordered from the Whitechapel Bell Foundry in 1753 became known as the "Sister Bell". It was installed at the Pennsylvania State House (Independence Hall), and attached to the State House clock. The Sister Bell rang the hours until the late 1820s, when the bell was removed during a renovation and loaned to the in Philadelphia. In 1829, the bell was hung in a new cupola and tower designed by architect William Strickland. There it remained until , , when it was destroyed, along with the Olde St. Augustine Church, during the . The friars of St. Augustine had the "Sister Bell" recast and transferred to , which had been established in 1842. It is currently enshrined in the Falvey Memorial Library on Villanova's campus.

* "The Liberty Bell March", composed by
* The Mercury that astronaut flew on , , was dubbed "Liberty Bell 7". Mercury capsules were somewhat bell-shaped, and this one received a painted crack to mimic the original bell. "Liberty Bell 7" became the only Mercury capsule to suffer an integrity failure.
* composed a work for chorus and orchestra, "Liberty Bell", that incorporates a 1959 recording of the actual bell made by .