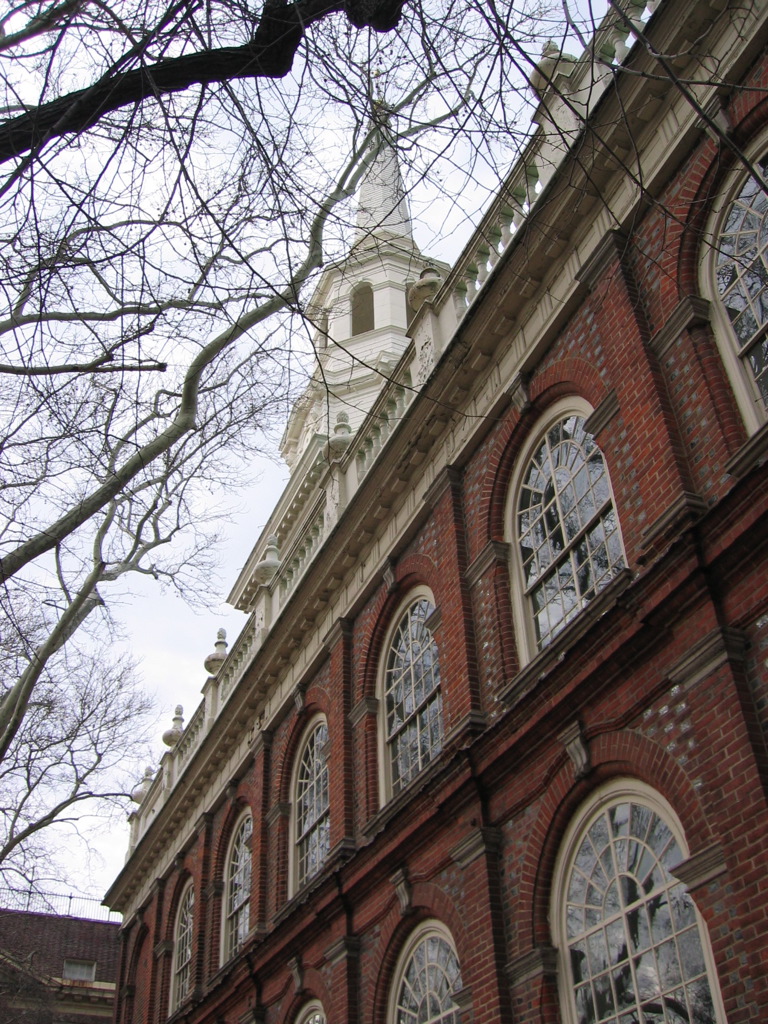 Christ Church is an Episcopal church located in Philadelphia, . It was founded in 1695 by members of the , who built a small wooden church on the site by the next year. When the congregation outgrew this structure some twenty years later, they decided to erect a new church, the most sumptuous in the colonies. Constructed between 1727 and 1744, Christ Church is considered one of the nation's most beautiful surviving 18th-century structures, a monument to colonial craftsmanship and a handsome example of . It features a symmetrical, classical façade with arched windows and a simple yet elegant interior with fluted columns and wooden pews. The baptismal font in which was baptized is still in use at Christ Church; it was sent to Philadelphia in 1697 from All Hallows by the Tower in .

Christ Church's congregation included 15 signers of the . leaders who attended Christ Church include , Robert Morris, and (after she had been read out of the Quaker meeting house to which she belonged for marrying John Ross, son of an assistant rector at Christ Church). Brass plaques mark the pews where these individuals once sat. At the convening of the in September, 1774, Rector was summoned to to lead the opening prayers. During the war, the Reverend William White (1748-1836), rector of Christ Church, served as Chaplain to both the and to the .

As the first Protestant Episcopal church in the country, Christ Church is the birthplace of the American Episcopal Church in the United States. In September 1785, clerical and lay deputies from several states met in Christ Church and organized as a general convention, of which White was chosen president. He prepared a draft constitution for the church as well as an address to the archbishops and bishops of the Church of England, asking for the episcopate at their hands. White was also largely responsible for the liturgy and offices of the first American (published in 1789), which were to be submitted to Church of England authorities. At the convention of the Diocese of Pennsylvania in 1786, he was elected its first bishop and sailed for England with Dr. of New York, seeking consecration. After passage of a special enabling act by Parliament, White and Provoost were consecrated in early 1787 by the archbishops of Canterbury and York. Bishop White returned to Philadelphia that Easter Sunday. In 1789, under White's direction, the first meeting of the was held at Christ Church, marking the first true . White was the first Episcopal Bishop of Pennsylvania and served the congregations of Christ Church and St. Peter's Church for decades. White is buried in the church's chancel.

Christ Church is a and a unique historic site that continues its original function as an Episcopal parish. More than 250,000 tourists visit the church each year.

Several notable people are buried in the church and adjacent churchyard, including:
* (1752–1810), signer of the from

Many other notable people are buried at nearby associated , including and four other signers of the Declaration of Independence.