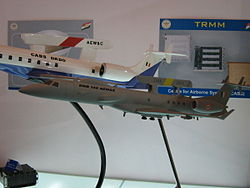 The Airborne Early Warning and Control System (AEWACS) is a project being undertaken by India's Defence Research & Development Organization to develop an AWACS for the Indian Air Force.

In 2003, the Indian Air Force and Defence Research and Development Organisation jointly carried out a study and evolved the system level requirements for an Airborne Early Warning and Control (AEWAC) system.[1] Sanction was then given to DRDO to develop a suitable AEWAC system. Primary responsibility for the project was handed to DRDO's Bangalore-based Centre for Airborne Systems (CABS), which is responsible for design, system integration and testing of the system. LRDE is also involved in the design of the radar array. DEAL, Dehradun is involved in data link and Communication Systems for AEW&CS.

The DRDO AEWACS program aims to deliver three radar equipped surveillance aircraft to the Indian Air Force. The aircraft platform will be the Embraer ERJ 145. Three ERJ 145 are to be procured at a cost of US $ 300 Million, for the project. The aim is to deploy these AEW & C aircraft by 2013.[2]

The AEW & C project is in addition to the acquisition of larger and more capable Phalcon AWACS from Israel. Three Phalcons have been ordered, with follow on orders of 3 more likely to be placed.[3]

Apart from providing the Indian Air Force with a cheaper and hence, more flexible AEW & C platform as a backup to its more capable Phalcon class systems, the local AEW & C project aims to develop the ability to locally design and operationalize airborne surveillance platforms.

India's sole previous effort to develop an AEWAC system was the Airborne Surveillance Platform, but the program, codenamed Airavat was ended after the testbed crashed.

The first fuselage was joined for India’s early warning aircraft in March for the first of three EMB-145s to be fitted with the Indian-designed antenna.

The Active Array Antenna Unit (AAAU), developed by DRDO’s Center for Airborne Systems, will then be integrated into the modified EMB-145 aircraft under the agreement, with certification to follow. Deliveries are expected to start in 2011.[4] The first aircraft is expected to be rolled out in 2011 for flight tests.[5][6][7][8]

In June 2010, it was reported that the Indian Air Force is said to be looking at acquiring 20 additional systems in addition to the existing 4 systems on order.[4][9]

The first platform was handed over to DRDO by Embraer in February 2011. The ground and flight tests of the aircraft is to be followed by installation of radar and other equipment.[10]

The AEWACS aircraft will have a locally developed AESA primary radar with IFF. The system will also have ESM (Electronic Support Measures), CSM (Communications Support Measures) ability. Datalinks to network the AEWACS with fighters, and ground based control systems will also be provided, as will be a SATCOM (Satellite Communication System). The aircraft will also have a comprehensive self defence suite. The entire avionics suite will be linked via a datahandling system, controlled by Mission computers.

The DRDO has released an overview of the AEWACS aircraft. [11]

The responsibility between various DRDO laboratories is split as follows:

NAL, India is assisting in aerodynamic studies of the antenna array, and flight modelling of the entire AEWACS platform.