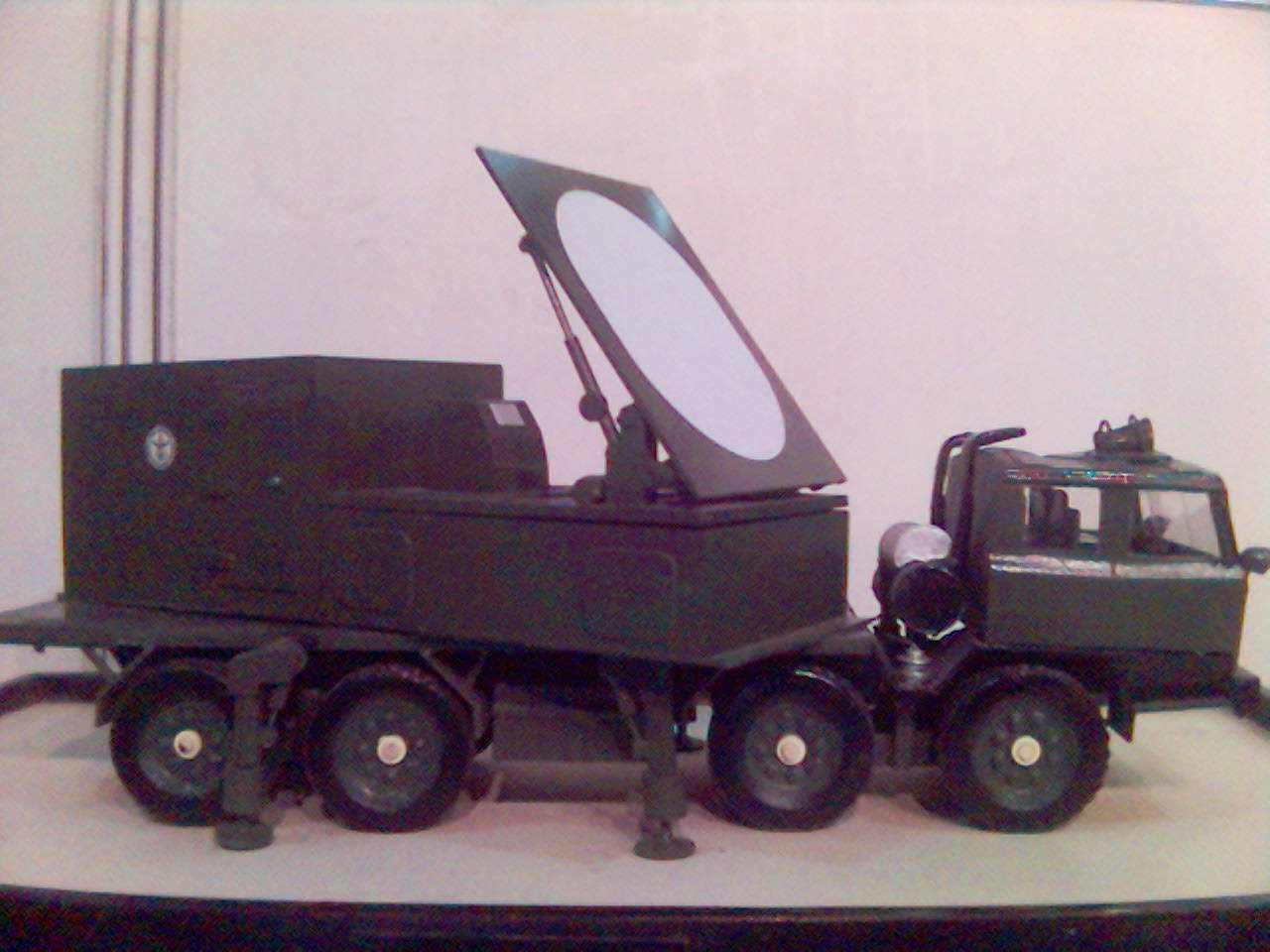 The Weapon Locating Radar (WLR) is a mobile locating developed by . The is designed to detect and track incoming artillery and rocket fire to determine the point of origin for .

The WLR has been jointly developed by DRDO's based laboratory, LRDE and the Government owned (BEL). The sub-systems have been fabricated by BEL based on the DRDO designs and delivered to LRDE for integration. [ [http://www.drdo.org/Electronics/wlr.html WLR Page] on DRDO website.]

The Indian army projected a requirement for fire-finding radars in the 1980s.

In September 1998, an RFP was issued for the urgent purchase of WLRs - An/TPQ-36/37 from Hughes (), () and ISKARA of (). However, the American and French radars were withheld after sanctions were imposed after the Nuclear tests, and negotiations with the Ukranian manufacturers came to no conclusion.

Efforts to acquire such a system intensified after the , where the Indian Army was severely disadvantaged by its lack of firefinding radars. While the Pakistani forces were equipped with American s, India only had British Cymbeline mortar detecting radars, which were not suitable. [cite news | author = Girja Shankar Kaura | title = Weapon-locating radars for India soon | url = http://www.tribuneindia.com/2002/20020219/main3.htm#2 | publisher = The Tribune | date = | accessdate = 2008-07-25 ] Almost 80% of Indian casualties during the war resulted from enemy artillery fire, making such a radar critical.

To correct this weakness, in 2002, the Ministry of Defence issued an RFP to five manufacturers. With the lifting of sanctions in late-2001, the US Government offered to sell the AN/TPQ-37 radar to India under their Foreign Military Sales (FMS) programme for Rs. 68 each.

The WLR is similar to the AN/TPQ-37 radar in design and performance [cite news | title = India develops weapon-locating radar | url = http://news.indiamart.com/news-analysis/india-develops-weapo-8437.html | publisher = PIB Press Release | date = | accessdate = 2008-07-25 | quote = India has developed a weapon-locating radar (WLR) similar to the AN/TPQ-37 of the US at a cost of Rs.260 million ($49 million), Defence Minister Pranab Mukherjee told the Lok Sabha Dec 9. ] but is reportedly more user friendly. [ [http://www.forceindia.net/interview3.asp "Once we Partner with World Class Companies, we May have to Upgrade our Capabilities"] , An Interview with H.S. Bhadoria, Director, Bangalore Complex, Bharat Electronics Ltd., "Force Magazine". Retrieved ] It is a passive radar, derived from the (which is the fire control radar for the system). During tests of the at Chandipur, engineers noticed the Rajendra radar was able to detect and track shells being test fired at a nearby range.

The WLR Array is an electronically-steered radar, meaning the radar antenna does not move while in operation. The radar can electronically scan a +/-45º range of azimuths for incoming rocket, artillery and mortar fire. The radar antenna is slewable up to +/-135º within 30 seconds, which gives the WLR the ability to quickly change its scanning sector, and provides it 360o scan capability. The Coherent TWT based transmitter of the WLR emits 40 kW of power.

Tracking of the target is done with monopulse signals with , which improves the radar's LPI. The radar processors conduct real time signal processing of the received signals. The weapon locating algorithm is an adaptive algorithm based on a modified version of the , and uses (CFAR) techniques to detect the target accurately. The operator can choose the CFAR technique to be used to maximize the accuracy of information. The data is processed on a programmable using a modified extended , with two filters - one with 6 states, and another with 7 states. Clutter rejection is achieved through (MTI), Airborne MTI (AMTI) and (FFT).

Information is displayed on ruggedised power PCs on a high resolution multi-mode colour display. The data is displayed in real-time and can be overlayed on a 3D digital map. The WLR can store a 100 km x 100 km size digital map for display at any time. Other modes include (PPI) display, RHI displays, etc. Up to 99 weapon locations can be stored and tracked at any time and can be transmitted to the command centre.

The WLR is designed to detect and track incoming artillery rounds, mortar and rockets and locate their launchers. In its secondary role, it can also track and observe the fall of shot from friendly guns and provide fire corrections to counter-battery fire.

The detection range for large caliber artillery rounds is up to 30 km, and increases to 40 km for unguided rockets. The robust design of the radar array and algorithms allows the WLR to effectively operate even in a high density fire environment, in severe clutter and interference (jamming) conditions. Up to 7 targets can be tracked simultaneously. The radar can track rounds fired at both low and high angles, and at all aspect angles - from behind or towards the radar, or at an oblique angle to the array. The WLR features adaptive radar resource scheduling to increase efficiency and reliability.

At a given position, the radar can scan for targets in one quadrant, encompassing a 90o sector. The array can electronically scan upto +/-45o from its mean bearing. Additionally, for 360o coverage from a given position, the whole array can be rotated by 135o on either side within 30 seconds to quickly change the scanning sector in response to threats.

Upon detecting an incoming round, the automatically acquires and classifies the threat and initiates a track sequence, while continuing to search for new targets. The incoming round's trajectory is tracked, and a computer program analyzes the track data and then extrapolates the round's point of origin. This calculated point of origin is then reported to the radar operator, thus allowing friendly artillery to direct counter-battery fire towards the enemy artillery.

The WLR also allows for remote operation, and data-linking for better situational awareness at higher echelons of the command hierarchy. The data can be automatically transmitted to a command center, and can communicate with higher echelons. The radar data can also be displayed on a remote screen to protect operators from any targeted attacks on the radar. The operators can also remotely change the scanning sector. Many radars can be networked together to work in tandem and increase the accuracy and provide more information.

The WLR is configured on a wheeled Tatra 8x8 truck platform . The trucks are manufactured by in India under license. The WLR is designed to operate in a high-density fire environment and has all weather capability, high mobility and quick reaction time. The system is a two vehicle configuration, with the primary sensor, processors, displays and control unit on a single vehicle, and a separate power vehicle to power the radar. The radar data can also be displayed remotely.

The Radar is designed to operate in harsh environments ranging from -20 to +55oC, in hot and humid conditions, and can be safely stored from -40 to +70oC. It can operate at high altitudes up to ft to m|16000|addr=yes.

A basic prototype of the WLR was first unveiled at -2003.

After user trials by the Indian Army in severe electronic clutter and “high density fire environment”, in June 2008, the WLR was accepted by the . 28 units are on order, and are being manufactured by BEL. A large number of components will be sourced from the private sector, including some (COTS) components from the international market. The WLR will eventually service the Army's requirement for 40-50 systems. [cite news | title = India to test long-range Agni missile next year | url = http://www.indianembassy.org/i_digest/2004/jan_15/agni.htm | work = India Digest | publisher = | date = | accessdate = 2008-01-23 | quote = DRDO's weapon-locating radar would be in competition to fill the Indian Army's need for 40-50 such systems. ] Further improved versions of the WLR are being planned and designed, including longer range versions, as well as more compact variants for better operation and navigation over mountainous terrains.

* [http://www.drdo.org/Electronics/wlr.html Weapon Locating Radar] on DRDO website.
* [http://media.bharat-rakshak.com/aero/AeroIndia2007/Brochures/WLR.jpg.html WLR Poster from DRDO]
* [http://www.acig.org/artman/publish/article_227.shtml Picture of the WLR] from -2003.
* cite news
author = Bharat Verma
title = How DRDO failed India's military
url = http://in.rediff.com/news/2008/jan/15guest.htm
publisher = Rediff News India
date =
accessdate = 2008-01-23
quote = DRDO scuttled a contract that was on the verge of being signed by India in 1997 for the import of a Weapon Locating Radar as the latter promised to produce it indigenously within two years.