The Tribe of Mic-O-Say is an honor society used by two of the 303 local councils of the Boy Scouts of America, The Heart of America Council and The Pony Express Council; it is not a program of the National Council of the BSA. Mic-O-Say's ceremonies, customs, and traditions are based on the folklore of the American Indian.

Mic-O-Say was founded in 1925 at Camp Brinton near Agency, Missouri under the guidance of H. Roe Bartle, who was the Scout executive of the St. Joseph Council, now Pony Express Council. Bartle combined his experiences in Wyoming with the St. Joseph Council's existing honor organization called Manhawka.

Bartle was inspired to create the organization after serving as the Scout executive for the Central Wyoming Council, in 1922. Bartle became extremely interested in the heritage and culture of the many Indian reservations in Wyoming. He spent many hours listening to stories about the Indian tribes and soon began to incorporate Indian values and ideals into his Scouting program. Bartle was inducted into a local tribe of Arapaho based on a reservation served by the Scout council, and according to traditional Mic-O-Say legend, was given the name Lone Bear by the Chief.

Bartle started as Scout Executive in St. Joseph, January 1925. The idea of Mic-O-Say was well formed from the moment he arrived. There already existed a camp society there called Manhawka, established by a previous executive. Bartle familiarized himself with the rudiments of it, and incorporated them into his central theme of an Indian-like society based on the principles of the Scout Oath. Bartle named the society "Micosay." A hyphenated version was used shortly after and remains popular today, though the non-hyphenated version can still be used.

Camp Geiger, which succeeded Camp Brinton in 1935, is considered the 'mother' Tribe of Mic-O-Say. Bartle was "The Chief," and conducted all the early ceremonies personally, placing an eagle claw around the neck of each new member and bestowing their Tribal Name upon them. He built up the tribe during the next few years.

Example of claws worn by Heart of America Council Tribesmen

In the fall of 1928, Bartle became the Scout executive of the Kansas City Area Council. Mic-O-Say had increased both Scouting and summer camp attendance in leaps and bounds, and he established another Mic-O-Say program at Camp Dan Sayre near Noel, Missouri, in 1929, the first summer there. Another honor program known as the 4Ms existed there at the time. In 1930 Camp Osceola opened near Osceola, Missouri, and remains open to this day, renamed the H. Roe Bartle Scout Reservation, or commonly known as "Bartle."

The 75th anniversary celebration of the program at the H. Roe Bartle Scout Reservation included thousands of members of the Tribe, including the current and previous Chief Scout Executives.

The purpose of Mic-O-Say is to reinforce the principles of the Scout Oath and Law, and to encourage continued participation in Scouting. Mic-O-Say Membership is conferred upon Scouts who participate in long-term camping and who best exemplify progress in their leadership skills. Membership is also given adult Scouters who meet specified qualifications. To be eligible for Mic-O-Say membership, a Scout must be an Honor Camper. He must be a seasoned, experienced Camper. He must have proven his leadership ability by his work in his Scouting unit and his community. He must be mature in thought and deed and be capable of understanding obligations as a Tribesman.[1]

In the Heart of America Council, the Council of Chieftains, She-She-Be Council, and Tribal Council lead the tribe. Their official publications are the Customs and Traditions booklet, Cedar Smoke newsletter, and Inner Circle magazines. 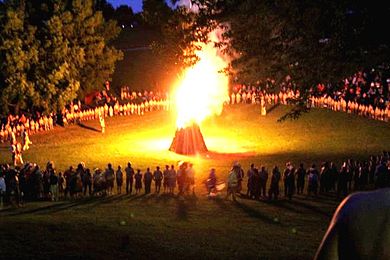 In the Pony Express Council, the Council of Chieftains and the Tribal Council lead the tribe. Their official publications are the Redbook and most recently Make Talk Now which is an electronic video version of the former "Make Talk" magazine and available for viewing on the Mic-O-Say website.

Members of Mic-O-Say have spread nationally and internationally. The previous Chief Scout Executive, Roy Williams, has been inducted into the program.[2] The current Chief Scout Executive, Robert Mazzuca was inducted into the Tribe in July 2008.[3] Two of the founders of Cerner,[4] an international health care IT company and the current CEO of J. E. Dunn Construction Group,[5] one of the nation's largest construction companies, are members of the program. U.S. Congressman from Missouri's 4th congressional district[6] Chair of the House Armed Services Committee Ike Skelton[7] is a Mic-O-Say member, and was made an honorary chieftain in 2007. Sam Graves, U.S. Congressman from Missouri's 6th Congressional District, is also a member, having achieved the rank of Runner as a youth and elevated in 2009 to Sachem.

The Kansas City Chiefs are named in honor of"Chief" H. Roe Bartle, who earned that nickname from his position as the Chief of Tribe of Mic-O-Say. He was instrumental in bringing the NFL to Kansas City during the time that he was Mayor.