The promotion of the Family Rosary through the use of mass media was intensely pursued by Father Peyton in the United States in the late 1940s, viewed by many as an important step of healing families whose love ones were lost in the intense fighting during the Second World War. In 1947, Father Peyton with the volunteer help from Hollywood's named stars, dramatizations of family life centered on praying the Rosary were being aired on the United States radio network, Mutual Broadcasting System.

In 1947, a Jesuit priest, Rev. Father James B. Reuter, SJ who was in the United States submitted a radio drama play to Father Peyton and was used on the "Family Theater" programs that was aired on Mutual Broadcasting System. Father Reuter, a priest who was assigned to the Philippines before the Second World War and was among those severely treated while in Japanese prison camp returned to Manila in 1948.

Father James B. Reuter, SJ directs a live on stage presentation of Family Theater in the Philippines. In the back ground is Father Patrick Peyton, CSC.

Father Reuter launched a Philippine version of the "Family Theater" on radio station KZPI with named Filipino actors and actresses voicing the radio drama scripts that Father Peyton used in the United States. The program would air every Sunday evening when every family member was at home.

With the advent of television in the Philippines, "Family Theater" on television were among the first programs that aired on the country's first television station, DZAQ owned by the Alto Broadcasting System, co-owned by a retired American war veteran communications engineer James Lindenberg and Antonio Quirino, brother of the incumbent Philippine president of that time, Elpidio Quirino.

Father Peyton first got to visit the Philippines in 1953, a few years since his mission was introduced to the Philippines by Father Reuter, his efforts to promote the praying of the Family Rosary have started to take roots in the Philippines and by the time he even started some of his famous Rosary rallies in the country, Father Peyton was already a household name in radio and television.

In the 1960s, Eugenio Lopez's Chronicle Broadcasting Network (CBN) acquired Alto Broadcasting System to establish what would be the most important television network in the Philippines all throughout the 1960s. ABS-CBN brought in "Family Theater" into its prime time programming in the sixties.

Named Filipino actors and actresses including unknown ones who would later become entertainment icons worked with Father Reuter's "Family Theater" productions for free. At first "Family Theater" was airing for free on Channel 3 of ABS-CBN but later the group was asked to bring advertising into the network, and when the call was made, people continued to donate to keep the program airing.

The Blanket of Darkness

Scene from Family Theater in the Philippines with a young Filipino business industrialist Jaime Zobel de Ayala as lead actor.

In 1972, President Ferdinand Marcos declared Martial Law and all forms of media were silenced. ABS-CBN was shut down under the Marcos regime and all "Family Theater" programs both on television and radio ceased to broadcast.

On December 8, 1985, Father Peyton led a very successful Marian Rally at Rizal Park. Amidst the political turmoil affecting the country at that time, the call to prayer and world peace brought more than a million Filipinos before the Quirino Grandstand. The rally, with the support of Cardinal Jaime Sin, consecrated the Philippines to the Immaculate Heart of Mary. Filipinos were incensed with prayers and strengthened faith, later to serve as the inspiration to peacefully overthrow the Marcos dictatorship two months later.

In 1985, months before the Marian Rally, Father Peyton would kindly seek permission to promote the scheduled rally on various media outlets in the Philippines who were all subject to censorship or were under the control of Marcos cronies. Father Peyton would finally appear on the government television station, Maharlika Broadcasting System Channel 4 for a series of talks on the Marian Rally and the importance of prayers. This television appearance would later result into the newer incarnation of Father Peyton's mission in Philippine broadcast history a year later.

With the peaceful overthrow of Marcos in 1986, with a renewed faith spreading like wild fire in the Philippines, seeing millions of Filipinos muzzling the guns of soldiers loyal to Marcos by flowers and Rosaries and with a new president, Corazon Aquino leading a nation in praying the Rosary, the mission of Father Peyton started to bloom again in the Philippines. Father Reuter revived "Family Theater" in 1986 under a new title "Ang Pamilya Ko," (My Family) but it would only run on ABS-CBN for thirteen weeks until it was canceled.

From drama to magazine talk show

With democracy restored in the Philippines and there was an intense feel of faith in the air, Father Peyton saw the possibilities of developing a different type of program for the Philippines. After the poor reception to the timely wholesome family-centered drama program "Ang Pamilya Ko" on ABS-CBN, Father Peyton started launching his one-hour once a week magazine talk show program.

"Family Rosary Crusade," was launched on 1987 almost simultaneous to the re-opening of ABS-CBN.

Every Saturday morning, Father Peyton would be on ABS-CBN to start the program with the praying of the Rosary. He would be later joined by a long-time advertising practitioner, Rosita "Babs" Hontiveros or "Tita Babs" (Auntie Babs) as the co-host. For almost five years, the program continued to air until the death of Father Peyton in June 1992.

FRC after the death of Father Peyton

Despite the death of Father Peyton in 1992, the weekly television program "Family Rosary Crusade," continues to air on ABS-CBN with Babs Hontiveros as main host with Father James Reuter, SJ. Behind the scenes, a group of media volunteers continue to lend a hand in continuing with the mission of Father Peyton, utilizing mass media as a handy tool for evangelization and the promotion of the praying of the Family Rosary.

Family Rosary Crusade was being run by Gennie Q. Jota who served as Executive Director and ably recruited volunteers to write, contribute almost anything to keep the program running. Veteran sound engineer, Beda Orquejo who was met by Father Peyton at the old government television network under Marcos' time left his regular work with the network to serve as all-around technical person. Orquejo would serve as director, cameraman and editor of the weekly episodes of Family Rosary Crusade.

In 1992, the Associated Broadcasting Company (ABC) resumed its broadcast operations after it was shut down by Marcos in 1972. The television network became a semi official carrier for Family Rosary Crusade. The network utilized as part of its station identification at the top of every hour a plug wherein the Blessed Virgin Mary speaking before Filipinos appealing to pray the Rosary and with the closing standard slogan, "The family that prays together stays together." The plug ran on ABC for almost ten years.

With more airtime, means more original programs to produce and this called in for more volunteers.

Father James Reuter, SJ will have his own daily program on ABC called, "Three Minutes a Day" that aired at 3:00PM for three minutes. Father Reuter would reflect on the day's Gospel reading.

In 2003, Family Rosary Crusade was moved by ABS-CBN from its VHF Channel 2 to its sister UHF station Studio 23, airing at 7:00AM every Sunday. The program continues with its magazine type programming with talks and discussions related to themes of the Catholic Church with solo host Bernard Cañaberal and supported by Claudine Zialcita, Ces Datu and guest priest Gospel homilist.

On March 2010, Family Rosary Crusade gets a new National Director, a member of the Congregation of Holy Cross from the South Asia province, Reverend Father Roque D'Acosta, CSC, formerly a Spiritual Director for the FRC for two years. The Family Rosary Crusade also left its 50 year office in Pope Pius XII Catholic Center in the Archdiocese of Manila and moved to a formation house/television studio in Loyola Heights, Quezon City within the recently created Diocese of Cubao. The new office serves as its studios and production facilities and formation house for future members of the mission of the Congregation of Holy Cross in the Philippines.

On the 21st anniversary of the program incarnation of Family Rosary Crusade on television, long-time guest host Rev. Fr. Erick Santos, of the Archdiocese of Manila and parish priest of the Shrine of the Child Jesus in the poor district of Tondo in Manila joins the FRC program as its main host on March 14, 2010 replacing long-time host Bernard Cañaberal.

The program continues with its magazine type programming with talks and discussions related to themes of the Catholic Church. 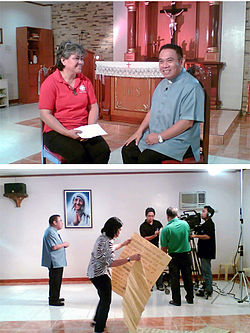 Rev. Fr. Erick Santos begins his first official taping for the Family Rosary Crusade taken at the makeshift studios at the Mother Teresa Chapel inside the Holy Child Parochial School in Tondo, Manila