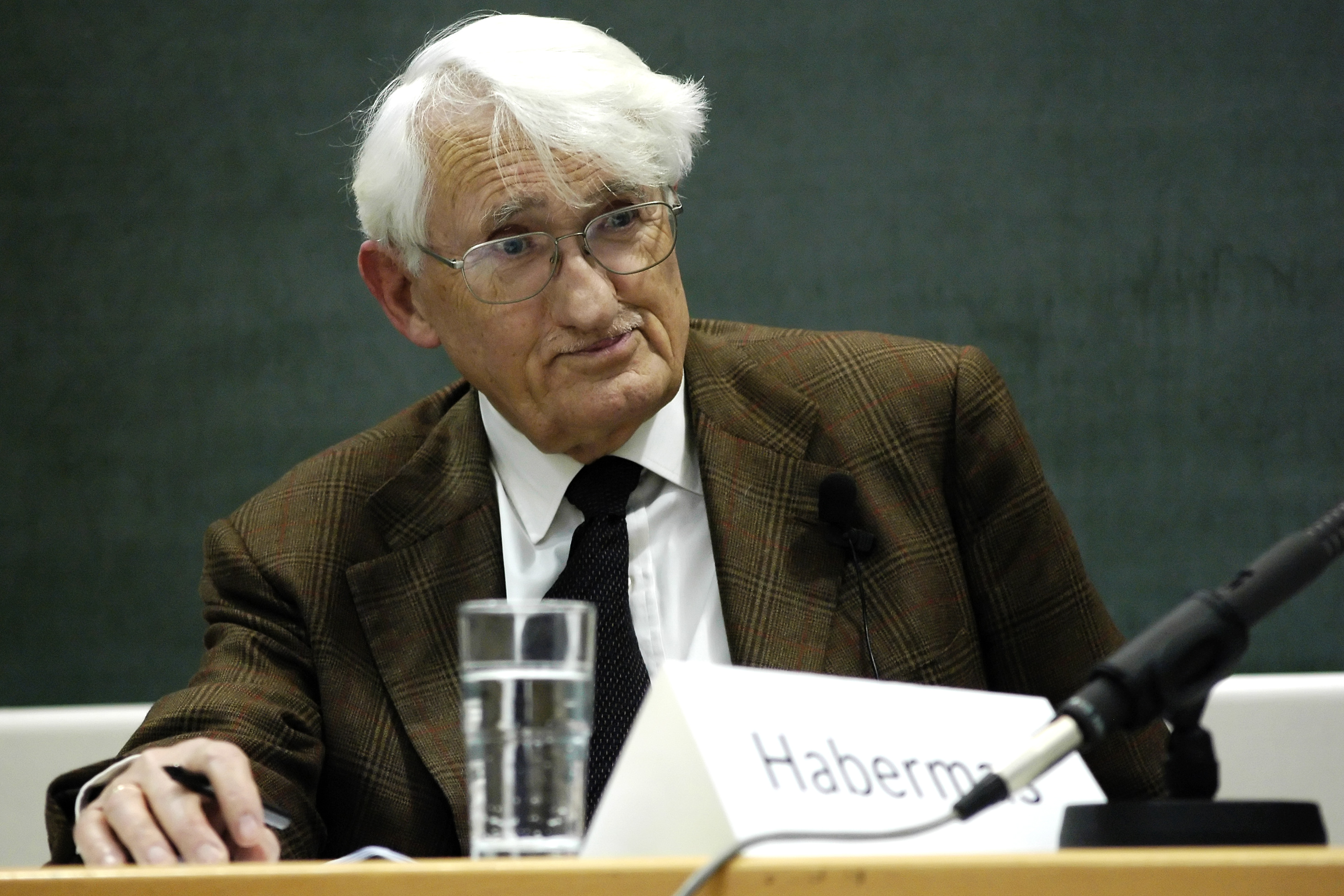 Jürgen Habermas (IPA2|ˈjʏʁgən ˈhaːbɐmaːs; born , is a German and in the tradition of and American . He is perhaps best known for his work on the concept of the , the topic (and title) of his first book. His work focused on the foundations of and , the analysis of and , the in a critical social-evolutionary context, and contemporary politics—particularly German politics. Habermas's theoretical system is devoted to revealing the possibility of reason, emancipation, and rational-critical communication latent in modern institutions and in the human capacity to deliberate and pursue rational interests.

Habermas was born in , .

Until his graduation from gymnasium, Habermas lived in , near Cologne. His father, Ernst Habermas, was executive director of the Cologne Chamber of Industry and Commerce. He studied at the universities of Göttingen (1949/50), Zürich (1950/51), and Bonn (1951–54) and earned a doctorate in philosophy [http://www.erz.uni-hannover.de/~horster/lit/habermas.pdf] from Bonn in 1954 with a dissertation entitled, " _de. Das Absolute und die Geschichte. Von der Zwiespältigkeit in Schellings Denken" ("The absolute and history: on the contradiction in Schelling's thought"). His dissertation committee included and .

From 1956 on, he studied and under the critical theorists and at the at the , but because of a rift between the two over his —Horkheimer had made unacceptable demands for revision—as well as his own belief that the had become paralyzed with political skepticism and disdain for modern culture—he finished his "" in at the under the Marxist . His "habilitation" work was entitled, " _de. Strukturwandel der Öffentlichkeit; Untersuchungen zu einer Kategorie der Bürgerlichen Gesellschaft" (published in English translation in 1989 as "The Structural Transformation of the Public Sphere: an Inquiry into a Category of Bourgeois Society"). In 1961, he became a "" in Marburg, and—in a move that was highly unusual for the German academic scene of that time—he was offered the position of "extraordinary professor" (professor without chair) of philosophy at the (at the instigation of and ) in 1962, which he accepted. In 1964, strongly supported by Adorno, Habermas returned to Frankfurt to take over Horkheimer's chair in philosophy and sociology.

He accepted the position of Director of the in (near ) in 1971, and worked there until 1983, two years after the publication of his , "". Habermas then returned to his chair at Frankfurt and the directorship of the Institute for Social Research. Since retiring from Frankfurt in 1993, Habermas has continued to publish extensively. In 1986, he received the of the _de. , which is the highest honour awarded in German research. He also holds the uncharacteristically position of "Permanent Visiting" Professor at in Evanston, Illinois, and " Professor" at , .

Jürgen Habermas considered his major achievement to be the development of the concept and theory of or , which distinguishes itself from the rationalist tradition by locating in structures of interpersonal linguistic rather than in the structure of either the or the knowing subject. This advances the goals of , while maintaining an inclusive moral framework. This framework rests on the argument called - that all have an inherent telos (the Greek word for "end") — the goal of mutual , and that human beings possess the communicative competence to bring about such understanding. Habermas built the framework out of the philosophy of , , and , the sociological theory of the interactional constitution of mind and self of , the theories of moral development of and , and the of his Heidelberg colleague .

He carried forward the traditions of Kant and and of through his emphasis on the potential for transforming the world and arriving at a more humane, just, and egalitarian society through the realization of the human potential for reason, in part through . While Habermas conceded that the Enlightenment is an "unfinished project," he argued it should be corrected and complemented, not discarded. In this he distanced himself from the Frankfurt School, criticizing it, as well as much of thought, for excessive pessimism, misdirected radicalism and exaggerations.

Within sociology, Habermas's major contribution was the development of a comprehensive theory of and focusing on the difference between and on the one hand and strategic/ and rationalization on the other. This included a critique from a communicative standpoint of the differentiation-based of s developed by , a student of .

His defence of and has been a source of inspiration to others, and is considered a major philosophical alternative to the varieties of . He has also offered an influential analysis of .

Habermas saw the rationalization, , and of society in terms of the of the potential for rationality that is inherent in the that is unique to the . Habermas believed communicative competence has developed through the course of , but in contemporary society it is often suppressed or weakened by the way in which major domains of social life, such as the , the , and s, have been given over to or taken over by strategic/instrumental rationality, so that the logic of the system supplants that of the "".

According to Habermas, a variety of factors resulted in the eventual decay of the public sphere, including the growth of a commercial , which turned the critical public into a passive consumer public; and the welfare state, which merged the state with society so thoroughly that the public sphere was squeezed out. It also turned the "public sphere" into a site of self-interested contestation for the resources of the state rather than a space for the development of a public-minded rational consensus.

In his "" (1981) he criticized the one-sided process of modernization led by forces of economic and administrative rationalization. Habermas traced the growing intervention of formal systems in our everyday lives as parallel to development of the , and the culture of . These reinforcing trends rationalize widening areas of public life, submitting them to a generalizing logic of efficiency and control. As routinized political parties and interest groups substitute for participatory democracy, society is increasingly administered at a level remote from input of citizens. As a result, boundaries between public and private, the individual and society, the system and the are deteriorating. Democratic public life only thrives where institutions enable citizens to debate matters of public importance. He describes an of "" [http://books.google.com/books?ie=UTF-8&vid=ISBN0802087612&id=tKDU3l3cq60C&pg=PA49&lpg=PA49&dq=ideal+speech+situation&sig=EsYFyIjaDQsWsYWUgtjvMK-13gU] , where actors are equally endowed with the capacities of discourse, recognize each other's basic social equality and speech is undistorted by ideology or misrecognition.

Habermas was optimistic about the possibility of the revival of the public sphere. He saw hope for the future in the new era of political community that transcends the nation-state based on ethnic and cultural likeness for one based on the equal rights and obligations of legally vested citizens. This requires a political community which can collectively define its political will and implement it as policy at the level of the . This requires an activist public sphere, where matters of common interest and political issues can be discussed, and the force of public opinion can influence the decision-making process.

Habermas and engaged in a series of disputes beginning in the 1980s and culminating in a mutual refusal to participate in extended debate and a tendency to talk past one another. Following Habermas' publication of "Beyond a Temporalized Philosophy of Origins: Derrida" (in "The Philosophical Discourse of Modernity"), Derrida, citing Habermas as an example, remarked that, "those who have accused me of reducing philosophy to literature or logic to rhetoric ... have visibly and carefully avoided reading me" ("Is There a Philosophical Language?" p. 218, in "Points..."). Others prominent in thought, notably , engaged in more extended polemics against Habermas, whereas found these polemics counterproductive. In hindsight, these contentious exchanges contributed to divisions within by focusing too heavily on a purported opposition between and &mdash; these terms were occasionally elevated to if not cosmological importance in the 1980s, due in no small part to works by Lyotard and Habermas and their often enthusiastic and sometimes incautious reception in American universities. It may be suggested that schematic terminology like "", trafficked heavily in the United States but virtually unknown in France, found expression in Habermas' understanding of his French contemporaries, bringing with them the baggage of the "" raging within American academic circles at the time. In short: although the differences between Habermas and Derrida (if not deconstruction generally) were profound but not necessarily irreconcilable, they were fueled by polemical responses to mischaracterizations of those differences, which in turn sharply inhibited meaningful discussion.

In the aftermath of 9/11, Derrida and Habermas established a limited political solidarity and put their previous disputes behind them in the interest of "friendly and open-minded interchange," as Habermas put it. After laying out their individual opinions on 9/11 in Giovanna Borradori's "Philosophy in a Time of Terror: Dialogues with Jürgen Habermas and Jacques Derrida," Derrida wrote a foreword expressing his unqualified subscription to Habermas's declaration, "February 15, or, What Binds Europeans Together: Plea for a Common Foreign Policy, Beginning in Core Europe,” in "Old Europe, New Europe, Core Europe" (Verso, 2005). Habermas has offered further context for this declaration in an [http://www.logosjournal.com/habermas_america.htm interview] . Quite distinct from this, , a close associate of Derrida's, has in a further conciliatory gesture offered an [http://userwww.service.emory.edu/~gbennin/habermas.doc account] of deconstruction intended to provide some mutual intelligibility. Derrida was already extremely ill by the time the two had begun their new exchange, and the two were not able to develop this such that they could substantially revisit previous disagreements or find more profound terms of discussion before Derrida's death. Nevertheless, this late collaboration has encouraged some scholars to revisit the positions, recent and past, of both thinkers, vis-a-vis the other.

In early 2007, Ignatius Press published a dialogue between Habermas and Roman Catholic Joseph Cardinal Ratzinger (now ), entitled The Dialectics of Secularization. It addresses such important contemporary questions as these: Is a public culture of reason and ordered liberty possible in our post-metaphysical age? Is philosophy permanently cut adrift from its grounding in being and anthropology? Does this decline of rationality signal an opportunity or a deep crisis for religion itself?

* In 1985, Habermas was awarded the for his work, "Die neue Unübersichtlichkeit".
* in 1987, Habermas vas awarded The Sonning Prize (Danish: "Sonningprisen") awarded biennially for outstanding contributions to European culture
* In 2004, the in Japan awarded Habermas the (50 million Yen).
* In 2005, the Norwegian awarded Habermas the €520.000 endowed .
* On August 9, 2008, the €50,000 European Prize of Political Culture (Hans Ringier Foundation) was awarded to Habermas at the Locarno Film Festival.