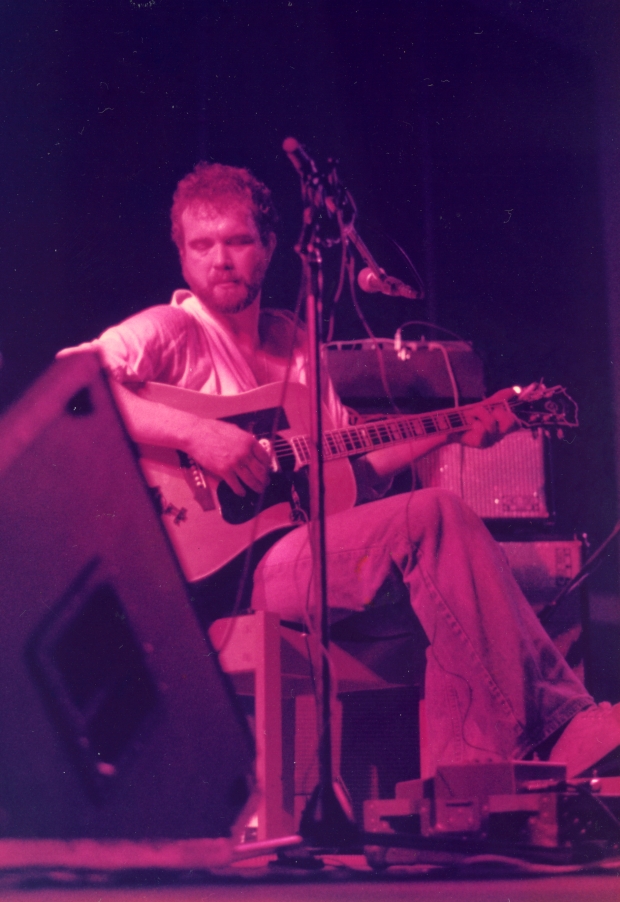 John Martyn (born Iain David McGeachy on in , , ["Some People Are Crazy - the John Martyn Story" - John Neil Munro (Polygon 2007)] ) is a British singer-songwriter and guitarist. Over a forty-year career he has released twenty studio albums and worked with artists such as , , and .

Martyn was born in , , . Martyn's parents, a pair of opera singers, divorced when he was five and he spent his childhood alternating between and . Much of this was spent in the care of his grandmother. His strongest ties are in , and he attended there.

Mentored by , John Martyn's professional musical career began when he was seventeen, playing a blend of blues and folk that resulted in a unique style that made him a key figure in the London folk scene during the mid-1960s. He signed to 's in 1967 and released his first album, "", the following year.

This first album was soon followed by "", which was moving towards . By 1970 Martyn had developed a wholly original and idiosyncratic sound: acoustic guitar run through a , phase-shifter, and . This sound was first apparent on "Stormbringer!" in 1970, which featured Martyn's then wife, Beverley Kutner, as his collaborator. She also appeared on "The Road to Ruin" in 1970.

In 1973, Martyn released one of the defining British albums of the 1970s, "", the title song a tribute to the singer-songwriter , a close friend and label-mate, who in 1974 died suddenly from an overdose of . On this album, as with the one that preceded it, "", Martyn collaborated with jazz bass player, , with whom he proceeded to have a fruitful musical partnership which continues to this day. He also developed a new, slurred vocal style, the timbre of which resembled a .

Following the commercial success of "", Martyn quickly recorded and released the experimental "Inside Out", a more difficult album with emphasis placed on feel and improvisation rather than song structure. In 1974, he followed this with "". In September of the next year he released a live album, "Live at Leeds"—Martyn had been unable to convince Island to release the record, and Martyn resorted to selling individually signed copies by mail from his home. "Live at Leeds" features Danny Thompson and drummer John Stevens, and is notable not only for the performances given, but the recording quality and incredibly quiet audience for a live recording. After releasing "Live at Leeds", Martyn took a sabbatical, including a visit to , spending time with famous reggae producer .

In 1977, he released "One World", which led some commentators to describe Martyn as the "Father of Trip-Hop". It included tracks such as "Small Hours" and "Big Muff", a collaboration with Lee "Scratch" Perry. "One World" is notable for having been recorded outside, the album's lush soundscapes are partly the result of microphones picking up ambient sounds, such as water from a nearby lake.

1980s and breakup of marriage

Martyn's marriage to Beverley finally broke down at the end of the 1970s and, according to his official website, "John hit the self destruct button". Out of this period, described by Martyn as "a very dark period in my life"

Released in October 1980, the album had been held up for a year by Island boss Chris Blackwell. He was a close friend of John and Beverley, and found the album too openly disturbing to release. Only after intense and sustained pressure from Martyn did Blackwell agree to release the album.

Commenting on that period, Martyn said, "I was in a dreadful emotional state over that record. I was hardly in control of my own actions. The reason they finally released it was because I freaked: Please get it out! I don't give a damn about how sad it makes you feel—it's what I'm about: the direct communication of emotion. "" was very cathartic, and it really hurt."

In the late 1980s Martyn would cite "Grace and Danger" as his favourite album, and said that it was "probably the most specific piece of autobiography I've written. Some people keep diaries, I make records." The album has since become one of his highest-regarded, prompting a deluxe double-disc issue in 2007, containing the original album remastered.

played drums and sang backing vocals on "Grace and Danger" and subsequently produced Martyn's next album, "", in 1981.

Martyn left Island records in 1981, and since then his recording output has been characterised more by re-recordings and re-releases of classic tracks through several labels than by original material.

In 2001 Martyn appeared on the track "Deliver Me" by keyboard player and DJ .

In July 2006 the intimate documentary "Johnny Too Bad" was screened on . [ [http://www.bbc.co.uk/bbcfour/music/features/john-martyn.shtml Johnny Too Bad] ] The programme documented the period surrounding the operation to amputate Martyn's right leg below the knee (the result of a burst ) and the writing and recording of "" (2004), an album described by Peter Marsh on the BBC Music website as "the strongest, most consistent set he's come up with in years."

Currently residing in Ireland, Martyn is still touring. He continues to write and collaborate with various artists. He recorded a ballad entitled "Really Gone" with Ultan John which was released in November 2006. [ [http://www.ultanjohn.com Ultan John homepage] ]

On , Martyn received the lifetime achievement award at the BBC Radio 2 Folk awards. The award was presented by his old friend Phil Collins. The BBC website says of Martyn, "his heartfelt performances have either suggested or fully demonstrated an idiosyncratic genius." [ [http://www.bbc.co.uk/radio2/events/folkawards2008/winners.shtml Folkaward's winner page] ] Martyn performed "Over the Hill" and "May You Never" at the ceremony, with John Paul Jones accompanying on mandolin.