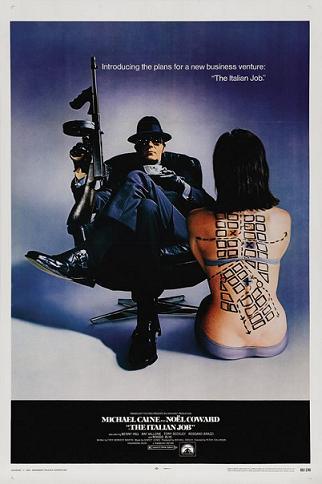 "The Italian Job" is a British caper film, written by , produced by and directed by Peter Collinson. It was released in 1969 and was very popular in Britain; subsequent television showings and releases on video have established it as something of a national institution in the UK, with a cult following elsewhere.

Its distinctive soundtrack was composed by , and includes two songs, "On Days Like These" sung by over the opening credits, and "Getta Bloomin' Move On" (usually referred to as "The Self Preservation Society", after its chorus) during the film's climactic car chase. Lead actor can be clearly heard among the singers in the latter. [ [http://www.theitalianjob.com/the_film_soundtrack.htm "The Italian Job" soundtrack] ]

The film starts with a driver's-eye view of a sports car driving through the Italian Alps as the titles roll. Following the car as it negotiates the turns at high speed, the scenery is cut off when the car enters the darkness of a tunnel and subsequently explodes. The viewpoint changes to the other end of the tunnel, where the remains of the ill-fated are pulled from the tunnel, wrapped around the front of a bulldozer.

Some time later dapper mobster () is released from prison. He is soon met by a woman (Lelia Goldoni) who is the wife of the victim of the car crash, former friend and fellow thief Roger Beckermann (Brazzi). She gives Croker the plans for a daring robbery that Beckermann was in the midst of planning, which attracted the attention of the local Mafia with fatal results. The plans outline a way to rob a four million dollar shipment of gold from China to banks in , a payment to for licensing their car designs for production in China.

Croker decides to continue the plan in spite of the risks, but needs to put together a large gang in order to pull it off. In order to fund the attempt, Crocker breaks into jail to meet with Mr Bridger (), an incarcerated criminal mastermind who nonetheless runs a gangland empire from within the jail. Croker explains "The Italian Job" and is able to arrange the needed funding. He assembles a group including computer expert Professor Peach (), electronics handler Birkinshaw () and several getaway drivers. The plan calls for Peach to infect Turin's lauded computerised traffic control system to create a traffic jam that will prevent the police from recapturing the gold after it is stolen. Three s will provide the escape route for the gold, able to navigate the gridlock in unconventional ways. Planning and training for the Job takes up the first half of the movie.

The second half of the movie takes place as the plans are carried out. Aware that the British will make another attempt, the Mafia boss Altabani () is waiting for Croker when he arrives. Instead of killing him, he damages the two Jaguar E-Types that have accompanied Croker and pushes Croker's off the side of the Alps and points him in the direction of England. Undeterred, Croker gathers the gang and Peach starts loading the broken software into the traffic control system the night before the heist. The next day Birkinshaw breaks the system that covers the route, just before Peach's software "goes off" and the city comes to a standstill. The rest of the gang quickly converge on the gold convoy, overpower the guards, and break into the armoured car holding the gold.

After the heist, the gang transfers the gold to the Minis in the entrance hall of the . The three Minis then race through the stylish shopping arcades of the "Via Roma", up the saillike roof of the Palazzo a Vela, around the rooftop test track of the famous factory building and even down the steps of the "Gran Madre di Dio" church while a wedding is in progress. The gang finally escapes the city by driving through large pipes, throwing off the police in the process. The gang make their final getaway on a six-wheeled bodied (actually used to transport the crew), driving up a ramp on the back whilst the coach is still travelling at speed. The getaway Minis are then pushed out of the still-moving coach as it negotiates hairpin bends in the Italian Alps.

Successfully on their way to along a winding mountain road, the gang celebrate in the back of the bus. However, a mistake by the driver sends the coach into a skid, with the back end of the bus left teetering over the edge of the cliff and the gold slipping towards the rear doors. As Croker attempts to reach the gold, it slips further, and the audience is left not knowing whether the coach, its contents, and its occupants survive &mdash; a literal ending. Croker's last line is "Hang on a minute lads, I've got a great idea! Err..."

Set in and and filmed with vivid colours in , the film remains an iconic evocation of the , although its rose-tinted view of London's criminal underworld was in sharp contrast to the brutal reality. In fact, Caine has statedFact|date=February 2007 that he took the lead role in "" (which portrays the same underworld with brutal realism) largely in order to correct the overly romantic picture of organized crime painted in "The Italian Job." An example of the lighthearted and comedic characterizations is that Mr Bridger's gang is run by an effeminate-seeming dandy called Camp Freddie, played by .

Apart from the colourful vision of a certain time and place, the film is also notable for its inventive and exciting car chases and stunts, arranged by . The film's cars were almost as much part of the cast as the people: the ill-fated in the opening sequence, various convertibles, s, a and an array of police s which are outdriven by the heroic British Mk1 Austin s. The Alpine setting through which some of the chases passed was another memorable aspect of the film.

According to a "Making Of" documentary,

Although it received a Golden Globe nomination (for "Best Foreign Film in the English Language") the film was not a success in America. Michael Caine blamed its failure there on an unattractive and misleading advertising campaign. [cite web | url= http://www.citizencaine.org/mike/italian.shtml | title=Michael Caine ref] As a result, plans for a sequel were shelved.

A 2003 remake of the movie, also called "The Italian Job", was set in Los Angeles and stars as Charlie Croker. It featured as John Bridger, played as more of a father figure to Croker than a criminal mastermind. It also employs the updated Mini Cooper for a chase scene towards the end of the film. There is also a video game based on the film, released for the game console and in 2002 and published by .

Noël Coward, who played the part of Mr. Bridger, was the godfather of the director, Peter Collinson. Coincidentally, the character Mr. Bridger is obsessed with Queen Elizabeth, while Coward was a friend of several members of the British Royal Family. Bridger's fellow convict and confidant, Keats, was played by , Coward's long-time partner. Michael Caine's brother Stanley also appears as one of Croker's gang. The gang also included , in his first film role. American distributors Paramount wanted to play the lead role.

The soundtrack was by jazz specialist and record producer . The main title theme "On Days Like These" was performed by , and the final theme "Get a Bloomin' Move On" ('The Self Preservation Society') was performed by the cast. The song's lyrics consist of . Many of the incidental themes in the film are based on British patriotic songs.

The chase sequences were entirely filmed in Turin, although the scene where the robbers' Minis are chased through a sewer tunnel were filmed in the Sowe Valley Sewer Duplication system in the English city of , in , filmed from the back of a . The person on the far side that closes the gate at the end of sewer tunnel is the director, Peter Collinson. Collinson was also the person that clung to the back door of the coach as the Minis entered it at high speed.

The jail used in the film that held Mr. Bridger was in , .

The training sessions, shown in the film, for the Mini drivers were held at the race track in , South London. The practice attempt to blow the doors off the bullion van, which led to its destruction and Croker's famous line, took place at the Crystal Palace Sports Centre. The Crystal Palace BBC transmitter can clearly be seen in the background of the shot.

A portion of the car chase, a surreal 'dance' between the Minis and the police cars, was filmed inside 's distinctive Exhibition Building with a full orchestra playing ''. It was cut from the final version of the film and appears as an 'extra' on the of the movie. A great deal of the chase sequence was used in the "" episode "The Thief of Budapest" set, as one might expect, in Budapest rather than Turin.

According to the director's commentary on the DVD, despite the huge publicity the film would give to the Mini, the car’s maker, BMC, were not completely committed to the project. BMC only provided a token fleet of Minis and the production company had to buy the remaining number needed for filming, albeit at trade price. Fiat by contrast grasped the commercial potential of the film and offered the production team as many super-charged Fiat cars as they needed, several sports cars for the Mafia confrontation scene, plus a cash lump sum of $50,000, but the producers turned down the offer because it would have meant replacing the Minis with Fiats.

As Croker walks through the garage where the Minis are being prepared for the robbery, we hear that "Rozzer's having trouble with his differential" and we clearly see that the back of the red Mini Cooper is jacked up and Rozzer is obviously working hard. This is probably an insider joke since the Mini is a front wheel drive car and does not have a rear differential. In the early 1960s, front wheel drive cars were exceedingly rare and as a result, asking a novice car mechanic to repair a Mini's rear differential was a popular .

Following the filming, the coach used at the end of the movie had its improvised rear doors welded up and was converted back to a bus. It was used on a Scottish school bus route until the mid 1980s and still survives somewhere in Scotland. The that has an unfortunate accident in the opening scenes was a real Miura P400. As it tumbles you can see it has no engine, so the car was stripped to just a frame before being tossed off the cliff.

When Charlie Croker picks up an Convertible from a garage after his release from prison. The Aston Martin scene in the original film was mostly improvised by the two actors, which caused slightly visible lighting problems in the scene as the crew didn't know where the actors would be.