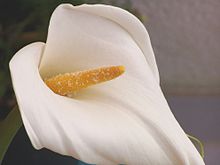 It is a rhizomatous herbaceous perennial plant, evergreen where rainfall and temperatures are adequate, deciduous where there is a dry season. Its preferred habitat is in streams and ponds or on the banks. It grows to 0.6–1 m (2–3 ft) tall, with large clumps of broad, arrow shaped dark green leaves up to 45 cm (18 in) long. The Inflorescences are large, produced in spring, summer and autumn, with a pure white spathe up to 25 cm (10 in) and a yellow spadix up to 90 mm (3½ in) long.[2]

Zantedeschia contains calcium oxalate, and ingestion of the raw plant may cause a severe burning sensation and swelling of lips, tongue, and throat; stomach pain and diarrhea may occur.[3][4]

Zantedeschia aethiopica is native to southern Africa in Lesotho, South Africa, and Swaziland. It has become naturalised in Australia, particularly in Western Australia where it occurs in areas with high periodical water tables and sandy soils and has been classified as a toxic weed and pest.[5][6]

A number of cultivars have been selected for use as ornamental plants. 'Crowborough' is a more cold tolerant cultivar growing to 90 cm (36 in) tall, suited to cool climates such as the British Isles and north-western United States. 'Green Goddess' has green stripes on the spathes. 'White Sail', growing to 90 cm tall, has a very broad spathe.[2] 'Red Desire' has a red instead of yellow spadix and appears to be rare. 'Pink Mist' has a pinkish base to the spathe.

In order to introduce colours to the large white Calla Lilies just like the many colour varieties available with the dwarf summer Calla Lilies, attempts to hybridise Zantedeschia aeithiopica x Zantedeschia elliotiana have resulted in albino progenies, which are non-viable.

It has been cultivated for the Easter floral trade since the early 20th century; hence the (ambiguous) name 'Easter lily', common in Britain and Ireland. It has become an important symbol of Irish Republicanism since the Easter uprising of 1916.

It is the National Flower of St. Helena [1], where it grows widely.