The Department of Agriculture and Food (DAFWA) is a Western Australian government department responsible for regulating and advancing agricultural and food industries within the state.

In 2004 the department had operating costs of $215,000,000 approx with $120,000,000 provided directly by the state government. The balance was from Federal Government grants, public operating activities and user charges and fees.[1]

This department is also responsible for Quarantine control on all plants, soil and animal products brought into the state. The Agricultural Protection Board is also part of this and responsible for the eradication of pests in WA including the Rainbow Lorikeet,[2] Skeleton weed,[3] and Portuguese millipedes (Ommatoiulus moreletii).[4]

In 1894, premier John Forrest, established the Bureau of Agriculture under the chairmanship of Charles Harper.[5] The members were A.R. Richardson, W. Paterson (the first manager of the Agricultural Bank), J.H.D. Amherst, F.H. Piesse and G.L. Throssell. Initially, the Bureau was not placed under the supervision of a Minister. This changed in April 1898 when the Bureau became the Agricultural Advisory Board and a new Department of Agriculture was gazetted under the control of Throssell as Commissioner for Crown Lands.

The department operates the following research stations throughout Western Australia: 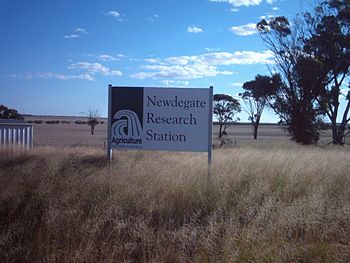