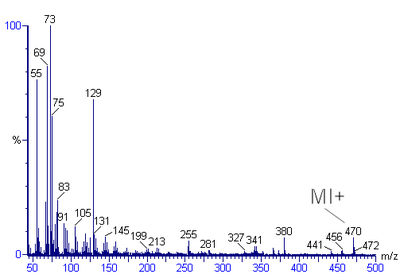 More peaks are visible with m/e ratios larger than the molecular ion peak due to isotope distributions. The value of 92 in the toluene example corresponds to the monoisotopic mass of a molecule of toluene entirely composed of the most abundant isotopes (1H and 12C). The so-called M+1 peak corresponds to a fraction of the molecules with one higher isotope incorporated (2H or 13C) and the M+2 peak has two higher isotopes. The natural abundance of the higher isotopes is low for frequently encountered elements such as hydrogen, carbon and nitrogen and the intensity of isotope peaks subsequently low and the intensity quickly diminishes with total mass. In halogens on the other hand higher isotopes have a large abundance which results in a specific mass signature for halogen containing compounds.

Metastable peaks are broad peaks at non-integer mass values. These peaks result from molecular fragments with lower kinetic energy because of fragmentations taking place ahead of the ionization chamber.

The fragmentation pattern not only allows the determination of the mass of an unknown compound but also allows guessing the molecular structure especially in combination with the calculation of the degree of unsaturation from the molecular formula (when available). Neutral fragments frequently lost are carbon monoxide, ethylene, water, ammonia, and hydrogen sulfide.

In this depiction single-electron movements are indicated by a single-headed arrow.

or the McLafferty rearrangement. As it is not always obvious where a lone electron resides in a radical cation a square bracket notation is often used.

The mass spectrum for toluene has around 30 signals. Several peaks can be rationalized in this fragmentation pattern.
_

Isotope peaks within a spectrum can help in structure elucidation. Compounds containing halogens (especially chlorine and bromine) produce very distinct isotope peaks. The mass spectrum of methylbromide has two prominent peaks of equal intensity at 94 (M) and 96 (M+2) and then two more at 79 and 81 belonging to the bromine fragment.

Even when compounds only contain elements with less intense isotope peaks (carbon or oxygen), the distribution of these peaks can be used to assign the spectrum to the correct compound. For example, two compounds with identical mass of 150, C8H12N3+ and C9H10O2+, will have two different M+2 intensities which makes it possible to distinguish between them.

Natural abundance of some elements

The next table gives the isotope distributions for some elements. Some elements like phosphorus and fluorine only exist as a single isotope, with a natural abundance of 100%.