] [cite web
url= http://www.drwhoguide.com/who_y.htm
title= PAGENAME
publisher = Doctor Who Reference Guide
author =
date =
accessdate = 2008-08-30] [cite web
url= http://www.shannonsullivan.com/drwho/serials/y.html
title= PAGENAME
publisher = A Brief History of Time Travel
last = Sullivan
first = Shannon
date = 2005-04-28
accessdate = 2008-08-30]
*All episodes of this story except Episode 4 are missing from the archives.
*Working titles for this story included "The Toymaker" and "The Trilogic Game".
*William Hartnell was on holiday during episodes two and three. Pre-recordings of his voice were heard in episode two and Albert Ward was a hand double for scenes where the mostly invisible Doctor played the Trilogic Game throughout the story.
*Brian Hayles was unavailable to do necessary rewrites, so then script editor performed them. As Tosh would no longer be script editor by the time the story was transmitted, he agreed with Hayles to take the writer's credit, with Hayles being credited for the idea. After Tosh finished work on the scripts, his successor, Gerry Davis, was forced to make further rewrites due to a budget shortfall. Tosh was unhappy with the rewrites and refused to be credited, while Davis could not take a credit because he was the series' script editor. As a result of this, Hayles was the sole credited author on the final serial, despite the fact that he had not worked on it in three months and the final scripts bore little to no resemblance to what he wrote.

Features a guest appearance by Michael Gough as the Celestial Toymaker. Gough would return to the programme to play Councillor Hedin in the serial, "". See also .

Carmen Silvera would return to the programme to play Ruth in the serial, "".

, the producers, received complaints from lawyers acting on behalf of the late Frank Richards' estate. The character Cyril (played by ) was said to bear a remarkable resemblance to William George Bunter. The BBC subsequently issued a disclaimer saying that Cyril was merely "Bunter-like". [ [http://www.imdb.com/title/tt0056751/trivia Cyril or Billy?] The resemblance causes allegations of plagiarism against ""’s producers, the : IMDB.com website. Retrieved on .] 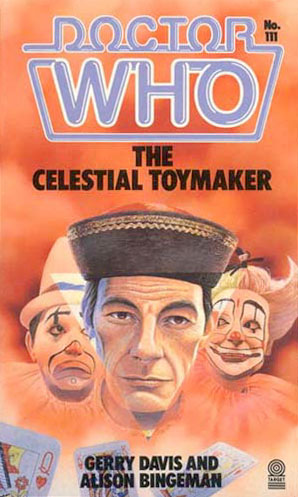 Soundtrack recordings made by fans, coupled with linking narration by Peter Purves, also facilitated the story's CD release. In episode 2, the King of Hearts recites a version of the children's rhyme which includes the word "". On the audio release, the offending word is masked by Peter Purves's narration. [ [http://uk.geocities.com/iant.williams@btinternet.com/rtfaq/faqpage.html#q6.1 Audio release censorship?] "Ian T. Williams’" personal website FAQs. Retrieved on .]

A novelisation of this serial, written by Gerry Davis and , was published by in June 1986. It is one of the few "Doctor Who" novels (original or adapted) to be written by more than one person.

* [http://www.personal.leeds.ac.uk/~ecl6nb/OnTarget/1986/celestia/86celest.htm On Target — "The Celestial Toymaker"]