Michael Wesley Redd (born August 24, 1979) is an American professional basketball player who currently is a free agent. He has most recently played for the Milwaukee Bucks of the NBA. He was born in Columbus, Ohio, where he attended West High School. He also was a member of the U.S. national basketball team.

Standing 6 feet 6 inches (1.98 m) tall and weighing 215 pounds (98 kg), Michael Redd has spent both his collegiate and professional career at the shooting guard position. In the college ranks, he spent three years leading the offensive attack of Ohio State University garnering point averages of 21.9, 19.5, and 17.5, respectively. As a sophomore, Redd and Scoonie Penn led Ohio State to the NCAA Final Four.[1] He was then drafted after his junior year in the 2000 NBA Draft as a second round pick (43rd overall) by the Milwaukee Bucks.

In his rookie year, Redd was not able to contribute immediately as he was behind NBA All-Star guard Ray Allen on the depth chart. Later on however, it became apparent that he was better than anticipated as proven by accounts that he had played extremely well against Ray Allen, Glenn Robinson, and other teammates in practice. It was then that former Bucks coach George Karl rewarded him with additional playing time. He did not disappoint as he posted averages of 11.4 points per contest as well as 44.4% on three point baskets.[2] A year later (2001–2002), he improved his average to a 15.1 points per contest while shooting 43.4% on three point baskets. Notably, it was this year that on February 20, 2002 against the Houston Rockets, Redd made eight three-point field goals in the fourth quarter, a current NBA record. In October 2002, he signed a four-year $12 million offer sheet with the Dallas Mavericks[2][3] but it was matched by the Bucks and he remained in Milwaukee.[2][4][5] During the 2003–04 season, Redd's performance, amongst other reasons (ouster of Ray Allen to Seattle via a trade), was rewarded with full starter's duties and later earning averages of 21.7 points per contest en route to his first and, so far, only All-Star Game appearance. 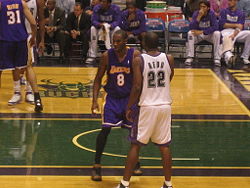 After the 2004–2005 NBA season, Redd signed a new contract with the Bucks that was negotiated by his agent Kevin Poston. The contract lasted 6 years, and was worth $91 million. He chose to stay with the Bucks over leaving for his homestate team, the Cleveland Cavaliers, and a chance to play for less money with LeBron James.

The Milwaukee Bucks were dealt a devastating blow January 25, 2009 when they learned Redd would miss the rest of the season with a torn ACL and MCL in his left knee. Redd missed the rest of the 2009 season.[6]

Redd returned for the Bucks to start the 2009–10 season, but during a game against the Lakers on January 10, 2010, he re-tore his ACL and MCL in the same knee that he had injured almost a year earlier. It was announced the next day that he would once again be lost for the rest of the season.[7]

On March 28, 2011 Redd was able to return to the Milwaukee Bucks after 14 months from the injury and recorded 4 assists in his return. On March 30, 2011 against the Toronto Raptors, Redd scored his first NBA basket since his return from injury. Redd played 10 games in the 2010-2011 NBA season.

Redd has frequently played for Team USA at the junior level and played in the 2007 FIBA Americas tournament, a qualifying tournament for the 2008 Summer Olympics. He averaged over 15 points throughout the competition. During the team's game against Puerto Rico, Redd set the qualifying record for most 3 pointers made in one game. He also set the record of most three pointers made in the whole tournament 28 surpassing Penny Hardaway who had the previous record of 22. Redd participated at the 2008 Olympics as the team went unbeaten on the way to winning back the gold medal after defeating 2006 World Champion Spain and living up to their "Redeem Team" moniker after missing out in the 2004 Summer Olympics. [8]

Redd, a devout Christian, bought a church building for his father's ministry as the first purchase after signing his big contract.[9] The church was newly named Philadelphia Deliverance Church of Christ built in his hometown of Columbus.[10]