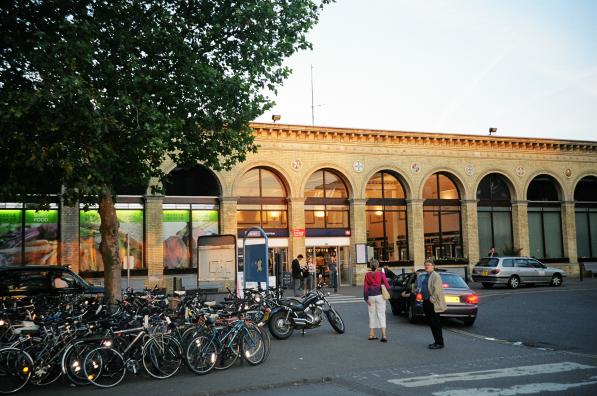 Cambridge railway station is a serving the city of in , .

Most of these routes are electrified at 25 kV AC overhead but the isn't.

At 514 yards, it is sometimes claimed that Cambridge has the longest in the country, but this honour belongs to Colchester, with Gloucester in second place. This suggestion is due to the station having only one through platform, with a scissors crossover in the middle to divide it in two, and to allow trains from both directions to pass trains already stopped there. The section south of the crossover is platform 1 (alongside s 2 and 3), and the section north is platform 4 (alongside bays 5 and 6). There are proposals to create an additional island platform incorporating platforms 7 and 8, on the eastern side of the station. This would enable southbound through trains to use these new platforms enabling the existing platforms 1 and 4 to be used exclusively for northbound trains. However, there is no timescale for this and costs have escalated in recent years.

The station was built some distance from the town centre (about one mile (1.6 km) south-east) owing to opposition from university authorities according to legend, but engineering factors were also important. There are tentative plans to built an additional station at Chesterton (Cambridge Parkway) approximately 3 miles north of the existing station. It is envisaged that this may alleviate some of the pressure on the existing station.

The opened to Cambridge in 1845. The station building, with its long classical façade and porte-cochère (infilled during the 20th century) has been attributed to both Sancton Wood and Francis Thompson [cite book|author=Biddle, Gordon and Nock, O. S.|title=The Railway Heritage of Britain|publisher=Michael Joseph|year=1983] and is listed Grade II. The single long platform is typical of its period but now unusual in that (apart from a brief period in the mid-19th century) it was never supplemented by another through platform. There were major platform lengthenings and remodellings of the main building in 1863 and 1908. The station layout was altered in 1896 by deviating the Newmarket line approaches.

The University helped to block later 19th century attempts to create a central station. [cite journal|author=Gray, Adrian|title=Cambridge’s quest for a central station|journal=Journal of the Railway and Canal Historical Society|volume=22|pages=22–4|date=1976] It also took powers to allow it to prevent undergraduates from travelling by train.

Historically, services from the station included

*
** Services via St Ives to Kettering

The line from Bishop's Stortford to Cambridge was electrified by in 1987, enabling electric trains to operate between Liverpool Street and Cambridge.

* serve the station with three routes:
**The half-hourly service to via the . Trains depart Cambridge at "xx32" (semi-fast service) and "xx51" (stopping service). These services use Class 317 s. During the morning peak some services start from King's Lynn, and during the evening peak some are extended beyond Cambridge to Ely and King's Lynn. On Sundays, the "xx51" service does not go to Liverpool Street, instead calling at all stations to Stratford via .

**An hourly service between Cambridge and via the . These services use new Turbostar units. During the weekday off-peak, these trains depart at xx12. From the new Summer 2007 timetable, all trains will call at Brandon and there will be additional stops on Sundays at Lakenheath (for the nearby RSPB reserve).
**The Ipswich-Cambridge service. These services use Class 153, Class 156 or rarely, Class 170 s. Almost without exception, these depart (Monday to Saturday) at xx43, with the 1943 extended through to Harwich International.

* also serve the station with their to service, via and . Services are operated using Class 170 s.