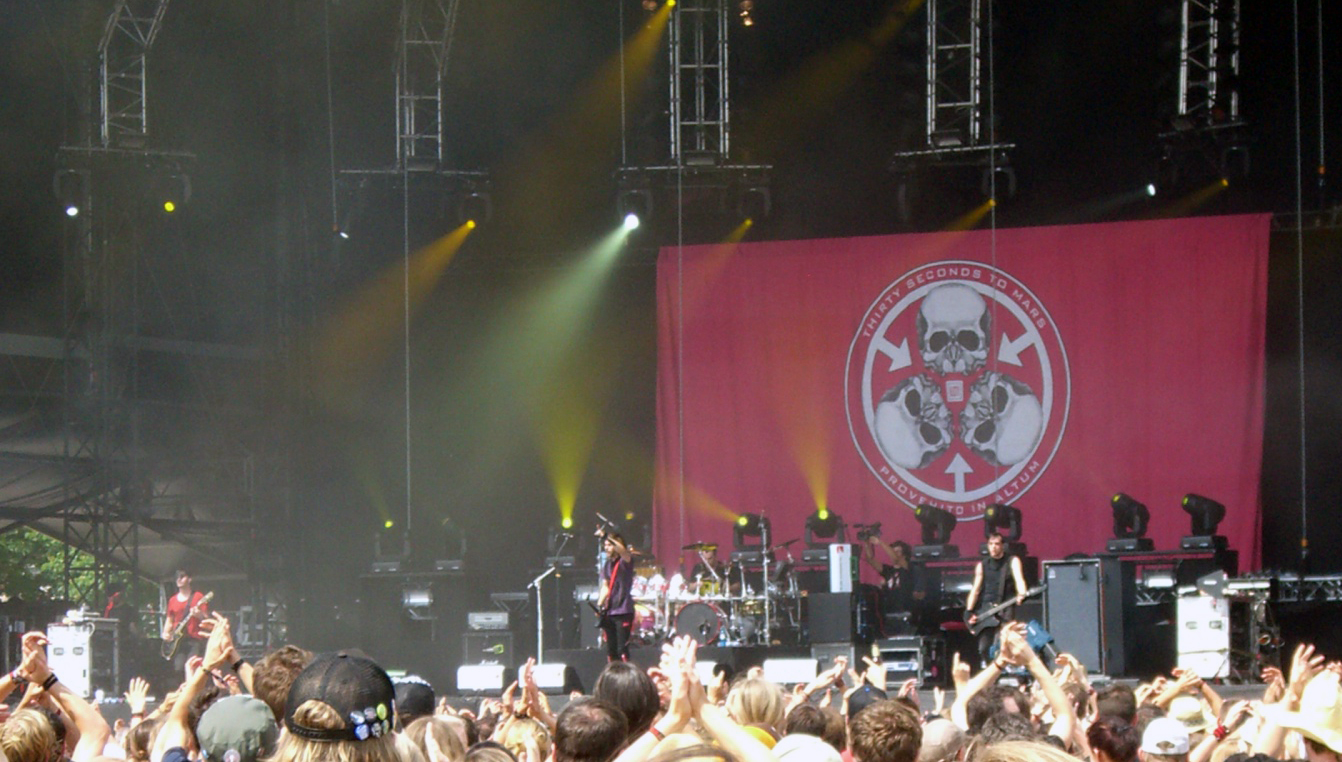 Created in 1998 by Jared Leto with his brother, Shannon. 30 Seconds to Mars began as a small family project. Matt Wachter later joined the band as bassist and keyboard player. After working with a number of guitarists (as the band's first two guitarists, Kevin Drake and Solon Bixler, left the band due to issues primarily related to touring), the three auditioned Tomo Miličević to round out the band's roster.

According to an interview from , the band's name

"actually comes from a thesis that the band found online that was written by a former Harvard professor. And one of the subsections of the thesis was titled 'thirty seconds to marssic' and he goes on to talk about the exponential growth of technology that relates to humans and saying that we are quite literally thirty seconds to mars. What it means to us is, we thought it best described our music, in short." [cite web| url = http://www.usanetwork.com/series/virginrecords/theshow/characterprofiles/30seconds/index.html| title = Character Profile: 30 Seconds to Mars| accessdate = 2007-03-13]

The band's debut album "30 Seconds to Mars", produced by , was released in 2002 to mixed reviews and achieved sales of just over 100,000Fact|date=September 2008. The album produced two singles, and . The former peaked at #31 on the U.S. Mainstream Rock chart.

Their sophomore album, "", was released on , . Because the album was leaked five months before its release, the band decided to include two bonus tracks: "Battle of One" (an original song that was also set to be the album's title track when it was first announced) and "Hunter" (a cover of the song). To further promote the album, the band also enclosed "golden tickets" in 12 copies, which granted their owners access to any 30 Seconds to Mars concert free of charge, along with backstage access.Listen
filename=The_Kill_-_30_Seconds_To_Mars.ogg
title="The Kill" (2005)
description=Sample from 30 Seconds to Mars' "The Kill" from the album .
format=Listen
filename=From_Yesterday_-_30_Seconds_To_Mars.ogg
title="From Yesterday" (2005)
description=Sample from 30 Seconds to Mars' "From Yesterday" from the album .
format=

On , , the band won the MTV2 Award for "" at the , one of their two nominations. The second nomination was for Best Rock Video; however, they lost to AFI's "". In the video members of the band reenact scenes from "The Shining". "A Beautiful Lie" was certified platinum by the RIAA in January for distribution of over 1,000,000 albums.

In October, the band began their "Welcome to the Universe" tour, sponsored by . They were supported on this tour by , , , and several other bands including . The tour was "environmentally sound" according to a 2006 interview with then-bassist Matt Wachter. "Jared and Shannon put together this thing called Environmentour which is illustrating ways—alternatives—to kind of clean up some of the mess we leave behind. We fueled the bus with vegetable oil," he explains. [cite web| last = Pascarella| first = Tony| authorlink = | coauthors = | title = 30 Seconds to Mars (Matt Wachter)| work = | publisher = | date = 2006-12-04| url = http://www.absolutepunk.net/showthread.php?t=193334| format = | doi = | accessdate = 2008-01-28] On , MTV2 premiered the video for ""; the video is the first American rock video ever shot in its entirety in the . [cite web| url = http://www.thirtysecondstomars.com/main.asp| title = 30 Seconds to Mars News 3/26/2007| accessdate = 2007-04-02] The music video is loosely based on the film "".

On , , the band performed at the Australian , where they were nominated for three awards, winning "Best Rock Video" and "Video of the Year" for "The Kill".

As of Spring 2007, the band is supporting as a part of the "" tour and have scheduled a string of dates in supporting . They are also scheduled to play Roskilde, , , Festival and Download. Following other commitments, they will begin working on their third album. As heard in the MTV Malaysia interview with Leto, he announces they are currently in the middle of the new album. Some of the songs seem to have been sang at their overseas tour.

However, in August of 2008, filed a $30 million lawsuit, claiming the band refused to deliver three albums as required by its contract. According to the lawsuit, the band "repudiated" a 1999 contract in July. [cite web| last = | first = | authorlink = | coauthors = | title = Virgin Records sues Jared Leto's band for $30M | work = | publisher = | date = 2008-08-15| url = http://hosted.ap.org/dynamic/stories/P/PEOPLE_JARED_LETO?SITE=PASUN&SECTION=HOME&TEMPLATE=DEFAULT| format = | doi = | accessdate = 2008-08-16] There is not an official release date for their third upcoming album, but recently a blog on the band's MySpace page has denied all rumours that there will be no third album - and also explains their side of the lawsuit, referring to California law and the current state of .

On , , "" announced that 30 Seconds to Mars has been nominated for two categories of the Kerrang! Awards 2007 - Best International Newcomer and Best Single - The Kill. On they had only won the award for 'Best Single,' which was The Kill. The other award was lost to . On , , the band won the for "Rock Out", one of the two categories they were nominated in.

On , , 30 Seconds to Mars won Fuse's Best of 2007 Award. They beat out and had amassed over 7 million votes. 31 other bands and artists such as , , and were also included in the contest.On , , the band was voted the second greatest band in "Kerrang!"'s 100 Best Rock Bands Ever.

On , , 30 Seconds to Mars performed at 'My Coke Fest' in South Africa, which saw the band back on South African soil since the inception and recording of "A Beautiful Lie". At a Press Conference Leto describe the experience as deeply personal, with the added hope that some new material may see the light of day on African Soil. The band played to a sold-out crowd in Johannesburg and Cape Town.

In a highly-publicised lawsuit, Virgin Records sued 30 Seconds to Mars in August 2008 for a failure to deliver on albums within a certain time period. The fine against 30 Seconds to Mars was revealed by Jared Leto in a blog to fans and is believed to be $30,000,000. The case is still pending.

On August 21 2008, 30 Seconds To Mars won two of the four Kerrang awards that they were nominated for. They won "Best International Band" and "Best Single - From Yesterday"

The band is currently working on their third album which currently has no release date or album name. The Echelon (fanbase of the band) have been waiting for this album for a long time and are excited for its arrival. Fact|date=October 2008

The band's phoenix (which the band named "") bears the phrase "Provehito in Altum", the band's . Roughly translated from Latin, this means "Launch forth into the deep"; but a more stylized version would be "Rocket in(to) High(ness)". The logo was primarily used for promotion of the band's debut, whereas for "A Beautiful Lie", the new Trinity logo was created consisting of three skulls, along with the band's name and motto.

The Echelon is a publicity street team for the band 30 Seconds to Mars, which helps in bringing friends to the shows, phoning local radio stations to request the band's songs, putting up posters, posting to band forums or related bulletin boards online, and maintaining magazines or websites dedicated to the band. It is also the name of one of their songs in the album "30 Seconds to Mars".

The band made acoustic versions of songs from their second album "". Some of the acoustics have been included in some versions of the album.
* - , , acoustic bass
* - ,

In addition to the tracks on their two full-length releases thus far, the band has also recorded a few other tracks. Among these tracks are "Phase 1: Fortification" and "Valhalla", the latter of which was present on an early demo. "Phase 1: Fortification" was released on an overseas single for "Capricorn (A Brand New Name)". Another track featured on certain imported "30 Seconds to Mars" titles is "Anarchy in Tokyo", a song that was recorded during the process of their self-titled debut. "Revolution" was also recorded for the self-titled album, but wasn't included because it didn't fit the theme of the album, and because of fear that listeners would take the lyrics too literally, especially after the . [cite web| url = http://www.shoutweb.com/interviews/30secondstomars0502.phtml| title = 30 Seconds to Mars: Welcome to Their Universe| accessdate = 2007-02-24| author = Redmon, Jess| month = May | year = 2006| publisher = Shoutweb.com] "Occam's Razor" was also recorded, but was never included on any of the band's releases. As a result, it is considered the most difficult to locate of the five unreleased tracks.

Demo versions of songs on the band's self-titled debut were also slightly different, along with different names. For example, "Fallen" was previously called "Jupiter", and "Year Zero" was previously called "Hero". Also made available are the demo versions of "Buddha for Mary" and "93 Million Miles"; the latter originally had lyrics referring to the band , whose members Dr. Nner and P. Exeter Blue I provided extra instrumentation on several tracks, but the lyrics were changed after the two bands were involved in a small feud.

During recent live shows, the band has premiered two new songs, one of which may end up on the new album: "Some Other Sun" and "The Believer", which were initially written for the self-titled album but was scrapped during recording, as well as live songs such as "Sisters of Heresy" and "Under Pressure / Pressure" (Name of song unsure, name based on lyrics).

On , , the band sent their fans a "stocking stuffer" in the form of a holiday song called "Santa Through the Back Door". It was featured on a (Los Angeles) compilation which coincided with the station's annual Almost Acoustic Christmas festival. The song also featured a spoken word intro performed by the band's roadie Mike "Colonel Buck" Bobroff who also performed the intro prior to the band's set at the festival on , .

In February 2008, the band had premiered a song during the first European blood ball in Milan, Italy. Leto said the song is called "Old Blues Song".