Headingley Parish Church or the Parish Church of St Michael and All Angels in Headingley, a suburban area of the city of Leeds, West Yorkshire, England is a large Victorian Church of England parish church in the centre of the parish on Otley Road. The church attracts visitors and worshippers from outside the parish and is popular with students.

The parish of Headingley was carved out of the once very large parish of Leeds, which at the time also included the districts of Armley, Beeston, Bramley and Hunslet. The first church was the site was built on land given in about 1620 by Sir John Savile. This church remained in place for 210 years and could hold 200 congregants.

The Industrial Revolution brought population booms to northern England and the population of Headingley increased to 2,000 warranting the creation of a vicarcy in 1849 and the building of a larger, 600-seater, church in 1838 (architect (R D Chantrell).

However, this church was not to last. Further increases in population meant that a new church was needed. Today's church is the third on the site and was consecrated in 1886.

With the growth in the local population a new parish of Far Headingley was created, and St Chad's Church, Far Headingley was built in 1868. The two churches work together, for example by holding early Sunday morning communion services alternately, and both participate in Churches Together in Headingley. 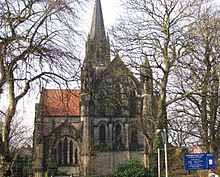 The Church viewed from Headingley Lane

The church was designed by J L Pearson, architect of Truro Cathedral. It was built 1884 1886, and the north porch was added and the spire completed in 1890.[1] It is built of gritstone with a tiled roof, and is Grade II* listed. The church wall and gate piers are Grade II listed.

The Parish Hall was built in 1834[1] or 1844 [2] as the Headingley National School, and is Grade II listed, as is the former Parochial Institute in Bennett Road, built in 1877 by George Corson and now used as offices.

Worship at the Church is in the liberal catholic tradition of the Church of England, with two of the four Sunday services being sung by the church's choir.