/ˈkjʊərɨt/)[1] is a person who is invested with the care or cure (cura) of souls of a parish. In this sense "curate" correctly means a parish priest but in English-speaking countries a curate is an assistant to the parish priest. The duties or office of a curate are called a curacy (as the office of a president is a presidency.)

From the Latin curatus (compare Curator) 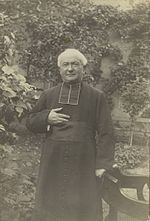 In modern Roman Catholic practice in the United States, "curate" is popularly used for a priest assigned to a parish who is not the pastor. The parochus (parish priest or "pastor") is the priest who has canonical responsibility for the parish. He may be assisted by one or more "parochial vicars". Such a parochial vicar is popularly - though incorrectly - called a "curate", "associate pastor", or "assistant pastor" in various regions of the country.

In other languages, derivations from curatus may be used differently. In French, a curé means the senior parish priest. So do the Italian word curato and the Spanish word cura.

In Anglican churches curate is used for an assistant priest or deacon. Officially they are "assistant curates".

Sometimes temporary curates, who have the status of assistant curates but lead the ministry of a parish, are appointed. However, to distinguish them from assistant curates, they are often referred to as "priests in charge". In the Church of Ireland some curates are styled "bishop's curates" as they are accountable directly to the diocesan bishop, while sometimes mentored by local parish clergy and are perceived to have more autonomy than other assistant curates.

Curates in the Church of England whose main financial income comes from sources other than their work as clergy may be termed "Self Supporting Ministers" or "Curate (SSM)".[2] 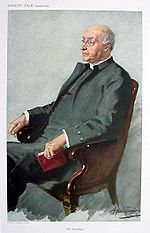 The Revd Canon Edgar Sheppard, Curate at Marlow and Hornsey and a canon of St George's Windsor

The Book of Common Prayer (1662) of the Church of England refers to the clergy as "bishops and curates" in the text of the prayer of intercession for Holy Communion. It uses the word "curate" in its original sense to refer to all clergy entrusted with a cure of souls.

Originally a bishop would entrust a priest with the "cure of souls" (pastoral ministry) of a parish. When, in medieval Europe, this included the legal freehold of church land in the parish, the parish priest was a "perpetual curate" (curatus perpetuus), an assistant would be a (plain) curate (curatus temporalis). The words perpetuus and temporalis distinguish their appointments but not the length of service, the apparent reference to time is accidental. A curate is appointed by the parish priest and paid from parish funds. A perpetual curate is a priest in charge of a parish who was (usually) appointed and paid by the bishop.

As the church became more embedded into the fabric of feudal Europe, various other titles often supplanted "Curate" for the parish priest. "Rector" was the title given to a priest in possession of the tithe income. This right to the income was known as a "Living". The title of rector comes from regere—"to rule". Those parishes where a monastery had appropriated the rights to the tithe income, a portion of this income was set aside for a priest to occupy the parish, essentially acting on behalf of the monastery, in other words vicariously – hence "vicar". In some cases, a portion of a tithe for a vicar could exceed the income of some rectors, depending on the value of the livings being compared.

In England and Wales, when a new parish was created from a larger rectoral or vicarious parish, the incumbent, or parish priest was sometimes styled as the "perpetual curate". The term "parson" came to be used to refer to all perpetual curates whether or not they received the higher positions of "vicar" or "rector". This led to those perpetual curates who had no higher position preferring to be styled "parson" so as to distinguish themselves from assistant curates. This happened to the extent that the term "curate" came to mean "assistant curate". The British Parliament passed an act in 1868 which authorised all perpetual curates to use the title "vicar". This reinforced the notion that a curate is an assistant parish priest or deacon. Although widely called "curates", however, they are still legally assistant curates. This English usage is used throughout the Anglican Communion and in some English-speaking Roman Catholic churches. The house provided for an assistant curate is sometimes colloquially referred to as a "curatage".

Minor canons are those clergy who are members of a cathedral's establishment and take part in the daily services but are not part of the formal chapter. These are generally more junior clergy, who in a parish church would be serving a curacy.