Cricket Revolution is an independently developed video game spotlighting multiplayer gameplay based around the sport of cricket. The game focuses on an online community system serving detailed cricket stats for gamers through internet play in addition to a LAN based and offline component.

The game is the first ever commercialised video game developed by Pakistan. 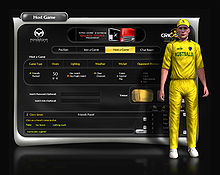 The primary mode of play involves online competition. It gives players access to all of Cricket Revolution’s game play, community and competitive features and allows the players to connect with their friends. It also keeps track of all the players’ statistics, performance data, and match winning scores and innings. The tracked data is then posted online to overall leader board and ranking systems. Online leaderboards and scorecards allow access to batting and bowling statistics for all matches that they play across each season and see how they and their clubs rank against other individual players and rival clubs.

There is a Local Area Network option that allows players to play against each other on their local area network. The players can set any of the over formats and environment settings according to their preferences. Cricket Revolution is set to revolve around online play, although the game won't take emphasis away from its single player gameplay

There are three additional single player modes: A complete ten teams league, a knock out tournament and an exhibition match. Each of these modes can further be played with varying difficulties and in three different formats – 10 over slog, 20 over or 50 over ODI. Players are also provided with training sessions in net practice to get acquainted with the game.

The game allows players to choose from 100+ full time, affiliate and associate cricketing nations. The player is presented with a significant number of customization options for each team, including player names, talents, specialities, and looks. Players in the game will be free to customize the environment of the match to suit their needs, These customizations include the weather, day/night lighting, varying pitch types and stadium, each of which has a direct impact on gameplay.

Mindstorm Studios originally announced that the game would be available via Steam on September 18 2009. However, the developers failed to meet the target date, stating that they were working on some minor gameplay issues. At present, the game is only available for the PC, however, Mindstorm has plans to extend the franchise to other platforms in the near future.

Waiting for cricket revolution 2. During an Interview with CricketGaming.net, Mindstorm Studios Marketing Manager, Hasan Muneeb talked about Cricket Revolution 2 and stated it as a next-gen cricket video game.[2]