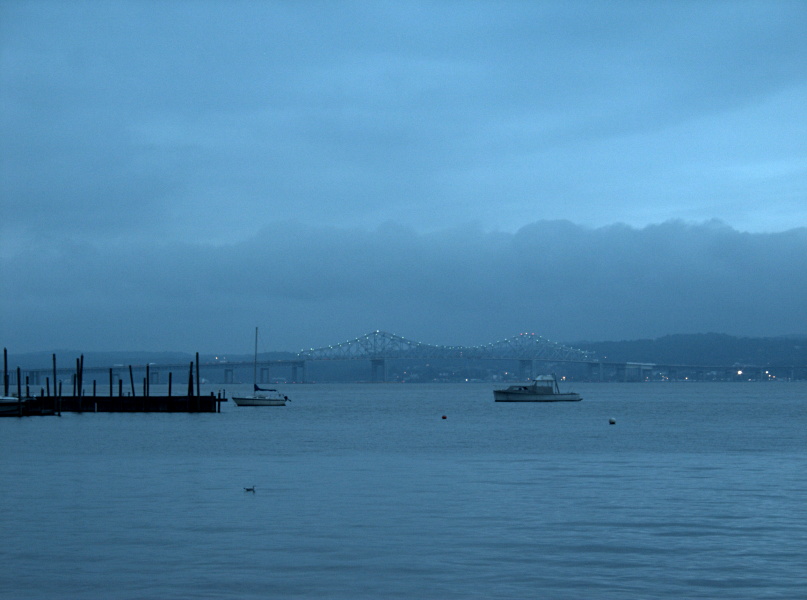 Piermont is a village in Rockland County, , . Piermont is in the Town of Orangetown, located on the near the border. The population was 2,607 at the 2000 census. The name is derived by combining a natural feature and man-made feature of the village.

Sparkill Creek cuts through the north end of the Hudson Palisades, providing easy access to the fertile valley of the unnavigable upper . "Tappan Landing," "Tappan Slote," or "Taulman Landing," as the little was called, thus became the original port for southern Orange County. The valley in the Palisades created by the creek also provided a way for the to easily reach the Hudson, and the railroad built a long pier in 1839 as its principal terminal. The pier and the nearby mountains suggested a new name for the community, which was incorporated as a village in 1850. The pier was a major embarkation point for troops traveling from to the .

Late in the 20th century, Piermont became a modest tourist attraction for s from New York City, particularly those bicycling on Bike Route 9.

Piermont Railroad station, located on Ash Street is a Victorian stick-style structure built in 1873 and served as Piermont's stop for the former line, which went from Nyack to . The Erie Railroad line stopped running through Piermont in 1966. The rail branch was abandoned in the 1970s as a result of railroad consolidation.

The exterior of the building was renovated to its original architecture and French gray, light-green and oxide-red color scheme in 2006 by The [http://www.piermonthistoricalsociety.org/ Piermont Historical Society] . They replaced the roof and installed a new convert|9|ft|m|sing=on cupola. The train station was placed on the in 2006.

Piermont is on the west bank of the Hudson River, south of the .

There were 1,189 households out of which 25.0% had children under the age of 18 living with them, 43.7% were married couples living together, 9.4% had a female householder with no husband present, and 43.4% were non-families. 35.5% of all households were made up of individuals and 6.4% had someone living alone who was 65 years of age or older. The average household size was 2.19 and the average family size was 2.87.

Landmarks and places of Interest

*Dederer Stone House or Stonehurst
*Haddock’s Hall - 300 Ferdon Avenue
*Onderdonk House - 758 Piermont Avenue
*Piermont - Formerly Tappan Landing. Tappan Slote ("Slote" is Dutch for "ditch," referring to cut passage through marshy mouth of Sparkill Creek: "kill" is Dutch for "creek"). Served as eastern terminus of New York & , completed from here to in 1851, then the longest trunk line in U.S. Still remaining is convert|4000|ft|m|abbr=on.-long pier into Hudson River once used for loading and unloading trains and boats. One can walk, or drive with a pass, to end of it. Tallman Mountain State Park to the south. The first president of the Erie Railroad, , built as his home a stone Victorian mansion in Piermont, which he called "The Cedars." It is now called "The Castle" by local residents and it is occupied privately.
*Piermont Railroad Station - Ash Street
*The Piermont Historical Society
*Rockland Road Bridge - between Piermont & Ferdon Avenue
*Sneden House - 38 Paradise Avenue
*Sparkill Creek Drawbridge - Bridge Street