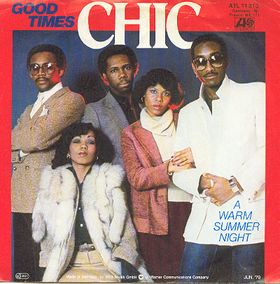 "Good Times" is a 1979-80 song composed by and . It was first recorded by their band Chic, for their 1979 album "Risqué". In August of that year, it became the band's second #1 single on the . "Good Times" has become one of the most sampled pieces of music in history, most notably in rap and .

"Good Times" features perhaps the most distinctive bassline in the history of recorded music. This is an incomplete list of songs that either use direct samples from "Good Times", or feature an original recording where the bassline or other motifs (particularly that of the instrumental break) are inspired by the song.

* "Good Times" was covered in concert by John Taylor of during his solo days, and released in a medley with "Planet Earth" on his live album "5.30.98".

The lyrics are largely based on 's "." It also contains lines based on lyrics featured in "About a Quarter to Nine" made famous by . Nile Rodgers has stated that these depression-era lyrics were used as a hidden way to comment on the then-current economic depression in the United States. [http://www.empsfm.org/programs/index.asp?articleID=613]
* The line during the chorus, "Our new state of mind", is infamous for being mistaken as "Are you straight or bi?"