The French Colonial Forces (French: Troupes Coloniales), commonly called La Coloniale, was a general designation for the military forces that garrisoned in the French colonial empire from the late 17th century until 1960. They were recruited from mainland France or from the French settler and indigenous populations of the French colonial empire. This force played a substantial part in the conquest of the empire, in both World Wars as well as in the First Indochina War.

The Armée coloniale did not include the famous North African regiments such as the Foreign Legion, Zouaves, Spahis, Algerian Tirailleurs (sharpshooters) and Goumiers, all of which were part of the Army of Africa, a part of the French Metropolitan Army. Instead the "Troupes Coloniale" can be divided into:

The troupes coloniales were predominantly infantry but included artillery units as well as the usual support services. At various dates they also included locally recruited cavalry units in Indo-China as well as camel troops in sub-Saharan Africa.

The colonial troops "the Colonial" which depend on a single General Staff, consists of two main types of units:

Only the Compagnies Franches were, strictly speaking, "colonial troops". The remaining units listed were regulars of the Royal Army brought from France itself. 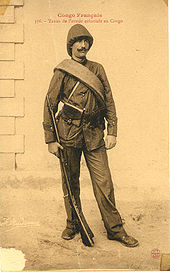 The European Colonial Infantry regiments were, until 1914, uniformed in a similar style to their metropolitan counterparts (though with yellow fringed epaulettes and medium blue trousers instead of the red epaulettes and red trousers of the line infantry). On colonial service white, dark blue or light khaki uniforms were worn with topees, according to circumstances. Between 1895 and 1905 a light blue/grey bleu mecanicien uniform was worn for field dress in Africa and Indo China (see photograph opposite). During and after World War I khaki became the norm for all colonial troops in contrast to the horizon blue of the metropolitan conscripts. The blue dress uniform was however restored for French personnel who enlisted as volunteers in either the Colonial Infantry or Colonial Artillery, from 1928 to 1939.

Tirailleur regiments in Africa worn red fezes and sashes with dark blue, or khaki uniforms until 1914. The Indo-Chinese units wore a salacco headdress and blue, white or khaki drill clothing based on local patterns. After World War I khaki became the normal dress for indigenous troops, although sashes and fezs continued to be worn for parade until the 1950s.

The modern Troupes de Marine are distinguished in full dress by dark blue kepis with red piping and bronze anchor badges, red sashes and yellow fringed epaulettes. These traditional items are worn with the standard light beige or camouflage dress of the modern French Army on ceremonial occasions.

From Marines to Colonials and back again

From 1822 to 1900 these troops, both French and indigenous, had been designated as Troupes de Marine, though they were not directly linked to the French Navy. Both services were however administered by the Ministre de la Marine and shared an anchor badge. This insignia continued to be worn after the Troupes de la Marine became the Troupes Coloniales in 1900 and photographs of mehariste (camel corps) troopers taken in the 1950s show anchor badges even in the Mauritanian desert far from the sea. In 1961 the title of Troupes de Marine was readopted after a brief period (1958–61) as Troupes d'Outre-Mer (Overseas Forces).

As the remaining French African territories became independent in the late 1950s and early 1960s, the tirailleurs were discharged, usually to join their new national armies. In 1964, the 7th Regiment of Tirailleurs, formed in 1913 as the 7e Régiment de Tirailleurs Algériens was redesignated the 170e Régiment d'Infanterie. The various "Tirailleurs Indochinois" regiments were dispersed by the Japanese coup of 10 March 1945 and were not reformed.

On 1 May 1994, in the presence of veterans of the armée d'Afrique, légionnaires, spahis, zouaves and artilleurs, the 170e Régiment d'Infanterie was redesignated as the 1er Régiment de Tirailleurs. It wears the insignia and bears the honors and traditions of the old 1er régiment de tirailleurs algériens, which was disbanded in 1964.

Throughout their changing titles and roles the French Troupes de Marine or Troupes coloniales retained a reputation for toughness and professionalism. Whether French or indigenous they were, for the most part, long service regulars and as such comprised a genuine elite.

The Marine Infantry, Parachute, Artillery and Engineer units remain as a distinct branch within the modern French Army.