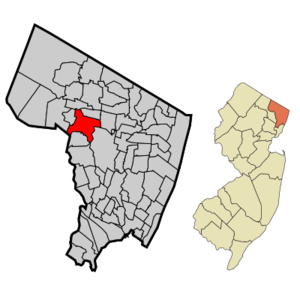 The Village of Ridgewood was created on , , with the same boundaries as Ridgewood Township. The Village became the municipal government while the Township remained as a school district.

In 1700, Johannes Van Emburgh built the first home in Ridgewood.Fact|date=July 2008

There were 8,603 households out of which 44.3% had children under the age of 18 living with them, 69.4% were married couples living together, 7.2% had a female householder with no husband present, and 21.2% were non-families. 18.5% of all households were made up of individuals and 8.8% had someone living alone who was 65 years of age or older. The average household size was 2.87 and the average family size was 3.30 .

In 1970, Ridgewood adopted the Council-Manager plan under the Faulkner Act. Under this form, the public elects five Council Members who act as a Board of Directors. Their principal responsibility is to hire and oversee a professional Village Manager who has full executive power for all departments.

The Village Council is the governing body of the Village of Ridgewood. The government consists five council members, with all positions elected at large in elections to serve four-year terms on a staggered basis, with two or three seats coming up for election every other year. ["2005 New Jersey Legislative District Data Book", , April 2005, p. 169.]

The Municipal Election for Village Council takes place on the second Tuesday in May, in even numbered years. The Mayor is chosen by the Village Council every two years, after a Municipal Election. The Reorganization meeting, which is when the new Council members take office, is held on July 1, and is when the Council selects a mayor and deputy mayor from among its members. The Mayor presides over Council meetings, but has no executive authority.

Of 566 municipalities statewide, Ridgewood is one of only four municipalities in New Jersey formed as villages, joining Loch Arbour, Ridgefield Park and South Orange.

According to the , Ridgewood is a socioeconomic of "J", the highest of eight categories. [ [http://www.state.nj.us/education/finance/sf/dfg.shtml NJ Department of Education District Factor Groups (DFG) for School Districts] , , dated , . Accessed , .]

The Ridgewood station is serviced by the Main Line as well as the . The station features three platforms. The first is for Main Line trains headed towards Suffern and Port Jervis. The second is for Bergen County Line trains headed in the same direction, and the third is for all trains headed south towards . While NJTransit trains on both the Bergen and the Main Lines go to Hoboken, they stop at the new , allowing for transfers to trains heading to Penn Station in and other destinations served by the station. Parking is limited near the Ridgewood train station. There are usually taxicabs available right at the train station for those arriving in Ridgewood, as the taxi building is on the northbound platform.

The southern terminus of Franklin Turnpike is in Ridgewood. Other roads that go through Ridgewood are and County Route 507.