North Santander (in Spanish, Norte de Santander) is a department of Colombia. It is in the north of the country, bordering Venezuela. Its capital is Cúcuta, one of the major cities of Colombia.

The area of present day Norte de Santander played an important role in the history of Colombia, during the War of Independence from Spain when Congress gave origin to the Greater Colombia in Villa del Rosario.

Many territorial divisions had to occur before definitively constituting the Norh Santander Department, created in 1910, time at which General Ramon González Valencia governed the Nation.

It was Law 25 of July 14, 1910, that took effect July 20 of the same year. Law 25 of 1910, signed by the then President of the National Assembly of Colombia, Emilio Ferrero; the Secretary, Marcelino Uribe exequible Arango and declared by the Gentleman President Ramon González Valencia and by Minister of Government Miguel Abbey Méndez, was the one that took step to the Department which today we know like North Santander, been born after several attempts given from April 1850, time in which the Republic of New Granada was born with 5 departments and 19 provinces.

In May 1858, the Republic of Colombia was denominated Granadina Confederation and were part of her 8 Departments, including the one of Santander. Years later, in 1863, it was decided in the National Convention of Rio Negro, to change the name of the country by the one of the United States of Colombia.

The expedition of the Political Constitution of 1886, at the well-known time like "Regeneration", changed the name of the country and is again from that time that our territory is known like Republic of Colombia. For that time also the provinces began to denominate departments and were divided in provinces. 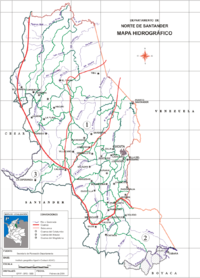 Rivers and lakes in the Norte de Santander Department

North Santander has a varied geography and is composed by mountainous areas, deserts, plateaus, plains and hills, with municipalities of heights very varied, this make in landscapes and climates immensely rich. Throughout his territory they cross by rivers and lagoons.

The Department is conformed by three natural regions: the most broken part is represented by the Eastern Mountain range, it begins in the site known as Naked Santurbán and soon it becomes the Mountainous area of the Motilones. On the other hand, the plains of the Catatumbo River and the Zulia River are located to the Northwest and to the south it is the valley of the Magdalena River.

The sector of influence of the Catatumbo river has temperatures averaging 24 °C with warm climates and humid, whereas in the zone of Cúcuta, it varies of dry to very dry; and in the mountainous area, great variety of climates that go from the temperings to the very cold ones, including inferior appears to the 12 °C.

A rich hydrographic system crosses the Department with three river basins of great importance: to the north the one of the Catatumbo river, to the west the one of the Magdalena river and to the southwest, the one of the Orinoco river. 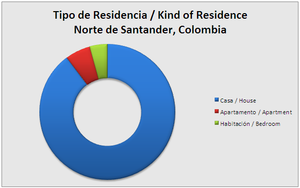 North Santander has a special demography due its border localization. Cúcuta has the largest population rate where a lot of Venezuelans live. Other cities are Ocaña and Pamplona.

In this Department the citizens prefer to live in houses (89.8%). 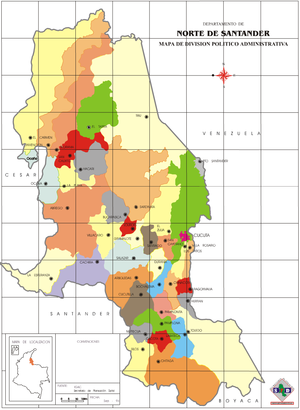 Among the typical dishes offered in the department there is Mute, Hayacas, of extended and rectangular form, the Cabrito, that is consumed roasted or cooked, the pies of chick-pea, that are an Indian called species of empanadas and the maize surrounded ones. Other dishes are rampuche and panche.