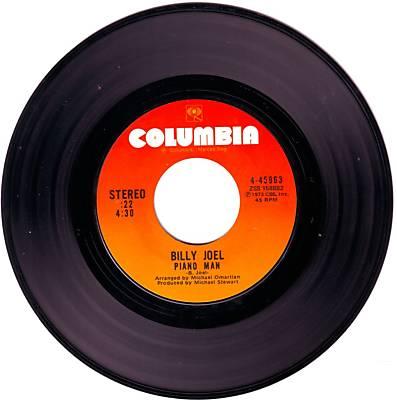 "Piano Man" was 's first major hit and is considered Joel's . The verses of the song are sung from the point of view of a bar piano player who focuses mainly on everyone else at the bar: John the bartender, the waitress, and bar regulars like Paul and Davy. Most of these characters have unfulfilled dreams, and the pianist's job, it seems (with the help of alcohol), is to help them "forget about life for a while". The chorus, in bar-room sing-a-long style, comes from the bar patrons themselves, who plead, "Sing us a song. / You're the piano man. / Sing us a song, tonight. / Well, we're all in the mood for a melody, / and you've got us feeling alright." [cite web |url=http://www.lyricsoncall.com/lyrics/billy-joel/piano-man-lyrics.html|title=Piano Man lyrics by Billy Joel|accessdate=2008-05-18]

"Piano Man" has been released as a single and on several albums.

"Piano Man" is a fictionalized retelling of real people Joel met during his days as a piano-lounge singer in , after the failure of his first album, "Cold Spring Harbor". [ [http://www.blender.com/guide/articles.aspx?id=151 Dear Superstar: Billy Joel Article on Blender :: The Ultimate Guide to Music and More ] ] Joel's own personal feelings about this failure are expressed in the failed dreams of the characters in his song. At the time, Joel was trying to get out of a bad deal with the record company Family Productions, so, according to Joel, he was "hiding out" at the bar, performing under the name Bill Martin while Columbia Records tried to get him out of the deal. [Billy Joel: The Life and Times of An Angry Young Man by Hank Bordowitz]

It was first released as the second track on Joel's" Piano Man" album and was later released on several collections, including "Essential Billy Joel".

When originally issued as a single, the song was deemed too long by record executives (5 minutes and 38 seconds), so two verses were cut in half and spliced together for the release as a 45. Later, Billy Joel's song "The Entertainer" mentions this event by commenting, "It was a beautiful song, but it ran too long. If you're gonna have a hit, you gotta make it fit. So they cut it down to 3:05."

It is in the key of C Major and has a fast 3/4 ["The Billy Joel Keyboard Book (2nd Edition)", page 67. Hal Leonard.] . It begins with a jazzy piano line moving into its famous piano/harmonica intro. The verses and subsequently the chorus feature a walking bassline in C ending with a D - G turnaround. The song follows the form: Intro, verse, verse (sung an octave higher), prechorus, chorus, instrumental fill. Instrumentally, Joel's 1973 version features piano, , bass, , drums and vocals. The piano line is quite sparse compared to Joel's later offerings but lyrically, it is one of his strongest.

The song has been one of Joel's greatest hits. It peaked at #25 on the . Today it remains popular, and ranks as Joel's #1 song on the as of August 2008. The song is so well-known that during Joel's concerts, he usually lets the audience sing the chorus.

During the first Face to Face tour featuring and Joel, ads promoted the event as " meets Piano Man".Fact|date=October 2007

The song was parodied by on his 2003 album "" ("Ode to a Superhero"). Yankovic's parody is about and chronicles the story of his first movie.

The song was also parodied by The Squadron at Newcastle United Jets F.C. games, when Mario Jardel played for the club. The lyrics would be sung as Jardel came on as a substitute or when he did something positive with the ball. The lyrics would be sung as:"Score us a goal, Super Mario,Score us a goal, tonight.We were all in the mood for a victory,And you got us feelin' alright."

The song is featured on the music video game .

Piano Man is also traditionally final song played at each annual , a major fundraiser for .

The song is referenced on Punchline's album Just Say Yes by the song "The Other Piano Man."