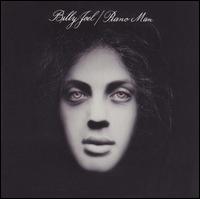 "Piano Man" is a rock album by , released in 1973. The title track is one of Joel's signature tracks and a seminal song in . It remains a concert standard, and is the source of Joel's nickname. "Piano Man", Joel's second album and his first with , emerged out of legal difficulties with his former label and became his breakthrough album.

The album was strongly influenced by 's and has a western theme in much of the music and lyrics. Lyrically, this is most noticeable in , musically in Captain Jack, Stop in Nevada and The Ballad of Billy the Kid (All of which make heavy use of the - a staple of country music) and instrumentally in Travelin' Prayer.

The single "Piano Man", a fictionalized retelling of Joel's days as a lounge singer in Los Angeles, peaked at #25 on Billboard's Pop Singles chart, and at #4 on the Adult Contemporary singles chart. "Travelin' Prayer" and "Worse Comes to Worst" peaked at #77 and #80, respectively, on the Pop Singles chart, while the album hit #27 on the Pop Albums chart. ("Travelin' Prayer" would later earn , when she covered it in 1999.)

All songs by Billy Joel.