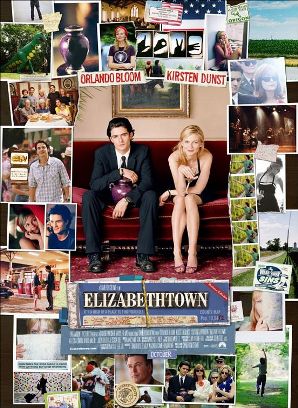 "Elizabethtown" is a 2005 American British written and directed by starring and . Orlando Bloom plays a shoe designer visiting his father's hometown in in the days following the father's death, and Kirsten Dunst plays a . has a small role as a of an athletic shoe company, and appears as a grieving .

The film begins with industrial designer Drew Baylor [ [http://www.elizabethtown.com/home.html Elizabethtown Official Movie Site - Directed by Cameron Crowe ] ] () as he walks towards the company he works in, an important international shoe company. As he enters the building, his boss Phil () starts discussing the failure of his project and its effects on the company overall, costing the company 972 million dollars. After he is fired, his girlfriend breaks up with him. Drew goes to his apartment, and defeated, attempts to commit suicide. However, his sister calls and tells him that his father has just died and he has to go to , to bring the body back home.

At the airport, Drew's sister () and mother () tell him that they wish to cremate his father's body. While on the nearly empty plane, a quick-witted flight attendant, Claire (), jokingly tells him that he is the airline's ten millionth customer, and gives him a free seat in first class. Despite his quick refusal, she insists that he move up to first class, because she doesn't want to have to walk all the way back to coach just for him. After he moves, Claire starts talking to him, and draws him a map to get to Elizabethtown. They go separate ways; however Drew will discover later that Claire wrote her phone number on the back of the map.

Despite the map and directions from Claire, Drew gets hopelessly lost on the highway. He finally arrives hours late. Drew notices the local traditions and the great respect shown to his dad's memory everywhere. A boy on a bike leads him to the , where Drew's cousin is waiting for him.

During the wake, Drew sees various members of his family, who all greet him as the " boy", although his father had only lived in California for eighteen months before moving to Oregon to raise his family. After viewing his father's body, he meets with some of his relatives near the burial plot they would like the body buried in. However, Drew insists on honoring his mother's wishes for a cremation.

Drew checks into a hotel and attempts to call home, but receives no answer. He remembers the map that Claire gave him with her number on it and decides to call her, but again receives no answer. He falls asleep, but is awakened by a call from Claire. The pair talks for most of the night and meet in the early morning. After a few days, he sees Claire in his hotel, and they spend the rest of the day together, including visiting the mortuary where Drew's father is to be cremated.

After making the final decision to cremate his father, Drew visits his relatives in Elizabethtown to tell them about it. In the kitchen he sees a photo of his father near a flame from the stove. Feeling guilty and regretful, he runs to the mortuary to stop the cremation, but arrives too late and is given an urn containing his father's ashes. Drew returns to the hotel carrying his father's ashes and sees Claire talking with the guests of a wedding at the hotel. Claire and Drew go the room where the wedding rehearsal dinner had taken place and where his father's memorial service would also be held. They talk about their feelings for one another and agree they are not right for each other. However, they kiss and end up sleeping together. Claire leaves the hotel in the morning while Drew is still asleep. However, Drew wakes up and meets up with Claire before she leaves, and tells her his plan to finish his business in Kentucky, and then return home to commit suicide, because of the massive failure of his shoe company . Claire insists that suicide would only be cowardly, and that he'd make a better impact by living. They plan to meet up again at Drew's father's memorial.

Drew's mother and sister arrive in Kentucky for the memorial service. After various people speak in memory of Drew's father, Drew's mother talks about life after the death of her husband and tap dances to his favorite song. Later Drew's cousin, along with his band "Ruckus" (consisting of members of Kentucky band ), begin to play the classic song . Claire arrives to give support to Drew. A stage prop, a large paper dove, catches on fire, setting off fire alarms and causing emergency water sprayers to go off, while everyone flees the room.

Claire gives Drew a map, with instructions and CDs, guiding him "home", with notes along the way to visit certain places. At each place he visits, he spreads some of his father's ashes. However, the directions come to a point where he is given two choices - to continue home or to finish the journey Claire laid out for him. Drew chooses to continue the journey. He is instructed to go to the "Second Largest Farmer's Market in The World" and locates a note telling him to "look for the girl with a red hat". After looking desperately for a few minutes, he finds Claire and kisses her.

was cast in 's role, but had to bow out. , , , Chris Evans, and all auditioned for 's part. Kutcher was actually hired to play Drew, but director Cameron Crowe decided during filming that the chemistry between him and Dunst wasn't right and Kutcher left the project. auditioned for the female lead, but was given a smaller role as Drew's girlfriend.

There is a character named Ben who is mentioned as a love interest of Claire. In the original cut of the film, Ben is revealed to be Claire's brother.

Recognizable settings for scenes shot in include the and . Although the exterior, lobby, and corridors of the Brown Hotel are seen, a passable replica of the Brown Hotel's Crystal Ball Room was re-created on a soundstage.

Although the title of the movie is Elizabethtown, most of the small town scenes were actually filmed in . A few scenes were filmed in LaGrange, and scenes portraying distinctive landmarks were filmed in Elizabethtown itself. Filming also took place in [ [http://www.neded.org/content/view/516/1256/ The Nebraska Department of Economic Development - Filmed in Nebraska ] ] and [http://en.wikipedia.org/wiki/Eureka_Springs Eureka Springs] , Arkansas.

In the original cut of the film, an epilogue reveals that the shoe designed by Drew turns out to be a hit, as it whistles with every step. This was cut from the release version of the film to prevent the ending seeming overly-drawn out. [ [http://rogerebert.suntimes.com/apps/pbcs.dll/article?AID=/20051013/REVIEWS/51004001/1023 :: rogerebert.com :: Reviews :: Elizabethtown (xhtml) ] ]