Aerial Image of Aviano Air Base 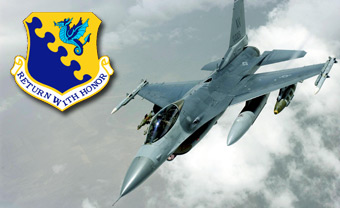 Aviano Air Base Airport codes|AVB|LIPA is a in northeastern , in region. It is located in municipality, at the foot of the , about 15 kilometers from .

Aviano is hosted by the (31 FW), a part of the United States Air Forces In Europe, a major command of the U.S. Air Force and alsothe air component of the , a Department of Defense unified command.

Aviano's current mission is to conduct regional and expeditionary operations under , or national tasking.

Pre-dating the U.S. Air Force, Aviano Air Base was established by in 1911, it was used as training base for Italian pilots and construction facility for aircraft parts. During , Italy used the airfield in missions against the Austro-Hungarian and German armies. At that time, two Italian aviators, Captain and Lieutenant , conducted an unauthorized, but heroic and successful, air raid on the n naval yards in , in what is now . In their honor, the base's name was officially changed to "Aeroporto Pagliano e Gori", in 1919. During the war the airfield was also overrun by the Austro-German army. Between the two wars the airfield was again used as a training base.

In 1954, the U.S. and Italian governments signed a joint-use agreement that brought the base into the (NATO). Headquarters of the (USAFE) officially activated the airfield on , with the activation of the 7207th Air Base Squadron.

Aviano had no permanent tactical combat aircraft assigned. Instead, the base hosted rotational fighter deployments from bases in the United States in support of alert commitments and Air Force weapons-training deployments. The 7227th Combat Support Group was the host unit at Aviano effective , , being replaced by the 40th Tactical Group on , to handle the rotational units from the United States on a permanent basis.

On June 2, 1995, US Air Force Captain , attached to the 555th Fighter Squadron in support of Operation Deny Flight over Bosnia, was shot down by a Bosnian SA-6 surface-to-air missile and forced to eject from his aircraft. Six days later, he was rescued by of the based on the .The event would come to be known as the .

In the , on , , a jet flying too low on a training exercise from Aviano Air Base severed a cable car's cable over the at , Italy, causing 20 deaths. Current Secretary of State Massimo D'Alema, a Prime Minister at the time of the tragedy, admitted having decided to trade the release of Lexington AMX detainee and activist with the promise to US officials that no further investigations on the Cavalese incident would have been allowed or putten forth.Fact|date=February 2008

Allegations have been made that on , , was kidnapped by agents while he was walking to his in , transported via Aviano Air Base to , , and turned over to the custody of Egypt's . In 2005 and 2006, Italian authorities issued warrants for dozens of persons they believe are connected to the kidnapping including a security forces commander at Aviano Air Base at the time of the alleged abduction.

The layout of Aviano Air Base is unique because the community consists of seven areas, which include the administrative, community and support areas, the command compound, the flight line area, a munitions storage area, a civil engineering complex, a recreational area and a decommissioned fuel railhead. Aviano Air Base is divided into nine areas stretched between the towns of Aviano and Pordenone, nine miles south of the base. In the wake of the Aviano 2000 project, many elements of the scattered areas are being consolidated into the flightline area. The major areas are:

Serving a population of roughly 5,400, the water system features six potable wells and two emergency links to the municipal system. Treatment is minimal, usually chlorine injection at the wellheads. Water in one base well had excessive (PCE) in the fall of 1999. PCE is a solvent used to clean machinery, electronic parts and clothing. The well was immediately closed and the public notified. Follow-up sampling detected no further problems or threats to health. The average daily water production is 400,000 to 600,000 gallons

Some of this text in an early version of this article was taken from pages on the [http://www.aviano.af.mil/ Aviano Air Base website] , which as a work of the U.S. Government is presumed to be a . That information was supplemented by:

Another reference to Aviano Air Base was included in the novel by . Joel Backman asks where the driver is taking him. The driver responds Aviano Air Base followed by his version of its history.