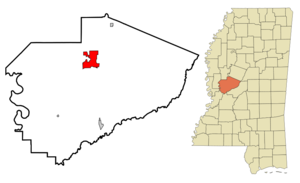 Yazoo City is a city in Yazoo County, , . It was named after the Yazoo River, which, in turn was named by the French explorer . "Yazoo" is said to be of Native American origin, meaning "River of Death". It is the county seat of Yazoo County and the principal city of the Yazoo City , which is part of the larger Jackson&ndash;Yazoo City Combined Statistical Area. According to the 2000 census, the population was 14,550.

US 49W provides a fairly direct link between Yazoo City and Belzoni. The old highway segment has been renamed MS 149. MS 149 passes through Panther Creek Swamp NWR and the communities of Louise and Midnight before it reconnects with the new US 49W at Silver City, 7 miles south of Belzoni. The new highway makes the town of Carter so near that it might be considered for annexation by Yazoo City in a few years. There are now two bridges across the Yazoo River at Yazoo City.

The section of MS 3 in Yazoo City is called Haley Barbour Parkway. , the current governor of Mississippi, grew up in Yazoo City and has a home on Wolf Lake, a lake north of Yazoo City. US Highway 49 (part of which was formerly US 49E) through Yazoo City is named Jerry Clower Boulevard, after the famous comedian, a former resident of Yazoo City.

Yazoo City is also known as the "Gateway to the Delta" due to its location on the transition between the two great landforms that characterize the geography of Mississippi (the western part of town lies in the Mississippi delta and the eastern part lies in the loess bluffs that characterize most of eastern Mississippi). It is also known as the Couth and Cultural Center of the Southeastern United States.

The community now known as Yazoo City was founded in 1824, originally with the name Hannan's Bluff. The town was later renamed Manchester then changed to Yazoo City in 1839. Yazoo City became the Yazoo County seat in 1849.

A epidemic struck Yazoo City in 1853.

In 1904 a fire destroyed much of central Yazoo City. According to local legend, this fire was the result of a [http://www.yazoo.org/Wtchgrav.htm witch] avenging her death. In actuality, a accidentally set a house ablaze while playing with matches. Three-fourths of the town was destroyed, including almost all the houses, as the fire quickly spread due to high winds that day. The fire stopped at a , sparing the (built in 1872) and ten homes located behind it. The town was rebuilt within two years.

The did much damage to the entire Delta, but Yazoo City was restored and is now protected by an effective flood prevention system.

There were 4,271 households out of which 37.7% had children under the age of 18 living with them, 31.5% were married couples living together, 32.6% had a female householder with no husband present, and 30.5% were non-families. 27.4% of all households were made up of individuals and 13.4% had someone living alone who was 65 years of age or older. The average household size was 2.85 and the average family size was 3.49.

Yazoo City is served by the .

There is only one private school, Manchester Academy.

Yazoo City is shown in the background in the movie "". It is in the scene where Borat visits the news station, WAPT 16 in Jackson. Specifically, Yazoo City is mentioned by the weatherman. However, on the U.S. map which shows Borat's travels through America, it is implied that this scene happened in either Georgia or Alabama.

Yazoo City is referenced in the 1986 movie "Crossroads".

In the movie "" character Delmar O'Donnell, , refers to Yazoo as the place where he robbed a . Also, the Woolworth's scene was filmed in what used to be a hardware store in Yazoo City. Finally, George "Baby Face" Nelson robs a bank, which he says is located in Itta Bena, Mississippi, but actually that was filmed in the old Bank of Yazoo City building in downtown Yazoo City.

Yazoo City was the main location for the book and the movie "". However, the movie was not filmed in Yazoo City, rather in which is located in Madison County and is about 30 miles southeast of Yazoo City.

* [http://www.isjl.org/history/archive/ms/yazoocity.htm History of Yazoo City's Jewish community] (from the )