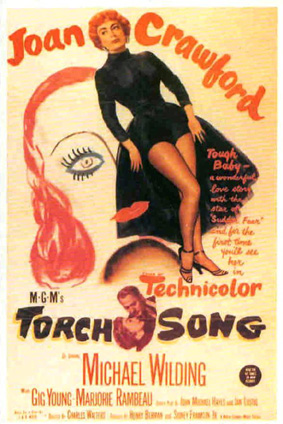 "Torch Song" (1953) is a starring and in a story about a Broadway star and her rehearsal pianist. The by and was based upon the story "Why Should I Cry?" by . The film was directed by and produced by Sidney Franklin, , and . "Torch Song" has gained note for the musical number "Two-Faced Woman", from "" in which Crawford in , lip-syncs to the voice of India Adams while snakily dancing with male dancers. The film marked Joan Crawford's return to MGM after a ten-year absence.

Jenny Stewart (Crawford) is a tough Broadway musical star, alienating her colleagues with her neurotic demands for absolute perfection. Jenny takes offense when her new rehearsal pianist Tye Graham (Wilding) criticizes her song stylings and ruthless ways. Graham was blinded in WWII but fell in love with Jenny when he was a young reporter. Deep down, Jenny yearns for a real and lasting love but is disenchanted with the men around her such as Broadway parasite Cliff Willard (). At her mother's (), she discovers an old newspaper clipping in which Tye reviewed one of her first shows and made it evident he loved her. Jenny realizes she is loved, goes to Tye, and they embrace. Cast includes , , , , and .

Otis Guernsey, Jr. in the "New York Herald Tribune" wrote, "Joan Crawford has another of her star-sized roles...she is vivid and irritable, volcanic and feminine...Here is Joan Crawford all over the screen, in command, in love and in color, a real movie star in what amounts to a carefully produced one-woman show." [Quirk, Lawrence J.. "The Films of Joan Crawford". The Citadel Press, 1968.]