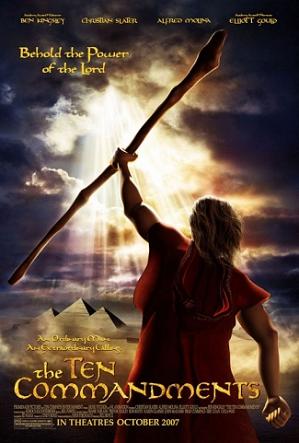 When is a baby, he is condemned to die by the Pharaoh. Moses's mother and sister instead send him down the Nile River, where Moses is rescued by the daughter of the Pharaoh. Moses is raised as part of the family, thinking that he is an Egyptian prince. When Moses is exposed as a Jew, he is exiled from Egypt, after which he has an encounter with God, learning that his purpose is to lead his enslaved Chosen People to the Promised Land. Moses then rescues the slaves from the Pharaoh by performing miracles and casting plagues. He parts the Red Sea to help his people escape from the Egyptian army into the Promised Land.

Critics gave the film poor reviews. The largest complaint was the poor animation for a film of 2007. As of October 24, 2007 on the review aggregator , 18% of critics gave the film positive reviews, based on 17 reviews. [cite web|url=http://www.rottentomatoes.com/m/epic_stories_of_the_bible_the_ten_commandments/ |title=The Ten Commandments - Rotten Tomatoes |accessdate=2007-10-24 |publisher=] On , the film had an average score of 25 out of 100, based on 5 reviews. [cite web|url=http://www.metacritic.com/film/titles/tencommandments2007 |title=Ten Commandments, The (2007): Reviews |accessdate=2007-10-24 |publisher=]