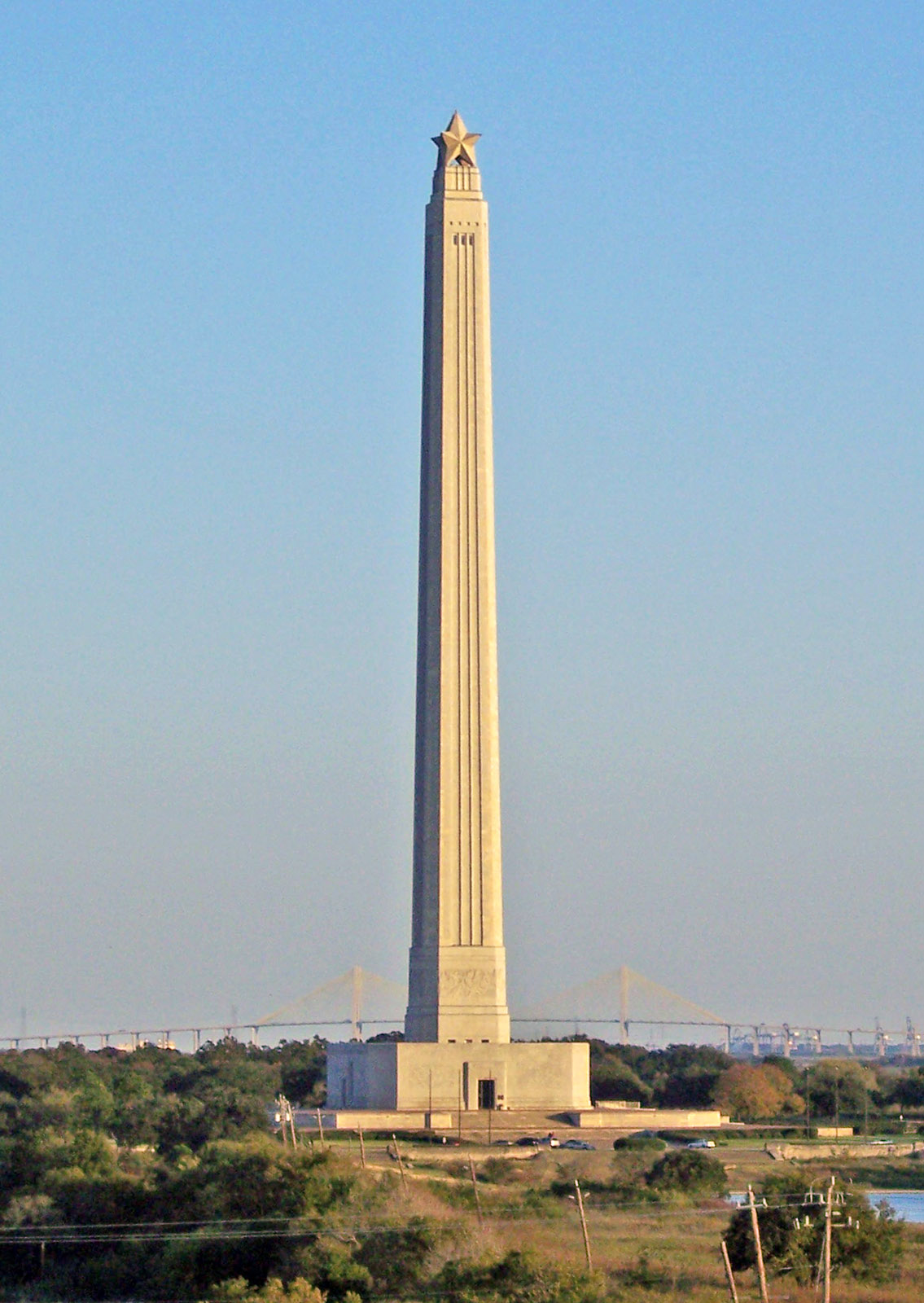 image_size=200px
caption =The San Jacinto Monument
nearest_city=
area =
built =,
architect=
architecture=
added = ,
governing_body = Private
The San Jacinto Monument is a convert|570|ft|m|1|sing=on high located in Harris County, , , near the city of La Porte. [http://www.sanjacinto-museum.org/Contact_Us/] . It is topped with a 220-ton star that commemorates the site of the , the decisive battle of the . The , dedicated on , , is the world's tallest monument tower, and tower, and is part of the , located along the . The column is an octagonal shaft faced with Texas Cordova shellstone, topped with a convert|34|ft|m|0|sing=on Lone Star - the symbol of Texas.

An inscription on the monument tells the story of the birth of Texas:

:"The early policies of Mexico toward her Texas colonists had been extremely liberal. Large grants of land were made to them, and no taxes or duties imposed. The relationship between the Anglo-Americans and Mexicans was cordial. But, following a series of revolutions begun in 1829, unscrupulous rulers successively seized power in Mexico. Their unjust acts and despotic decrees led to the revolution in Texas."

:"In June, 1832, the colonists forced the Mexican authorities at Anahuac to release Wm. B. Travis and others from unjust imprisonment. The , , and the , , followed; in both the Texans were victorious. , "Father of Texas," was arrested , , and held in Mexico without trial until July, 1835. The Texans formed an army, and on , , established a provisional government."

:"The first shot of the Revolution of 1835-36 was fired by the Texans at Gonzales, , , in resistance to a demand by Mexican soldiers for a small cannon held by the colonists. The Mexican garrison at Goliad fell ; the was won by the Texans, . San Antonio was captured , 1835 after five days of fighting in which the indomitable Benjamin R. Milam died a hero, and the Mexican Army evacuated Texas."

:"Texas declared her independence at . For nearly two months her armies met disaster and defeat: 's men were killed on the ; William Barret Travis and his men sacrificed their lives at the Alamo, ; was defeated at , ; 's men were executed near Refugio, ; and James Walker Fannin and his army were put to death near Goliad , ."

:"On this field on , 1836 the Army of Texas commanded by General , and accompanied by the Secretary of War, , attacked the larger invading army of Mexicans under General Santa Anna. The battle line from left to right was formed by 's regiment, 's regiment, the artillery commanded by George W. Hockley, 's infantry and the cavalry under . Sam Houston led the infantry charge."

:"With the battle cry, "Remember the Alamo! Remember Goliad!" the Texans charged. The enemy taken by surprise, rallied for a few minutes then fled in disorder. The Texans had asked no quarter and gave none. The slaughter was appalling, victory complete, and Texas free! On the following day General Antonio Lopez De Santa Anna, self-styled " of the West," received from a generous foe the mercy he had denied Travis at the Alamo and Fannin at Goliad."

:"Measured by its results, San Jacinto was one of the decisive battles of the world. The freedom of Texas from won here led to annexation and to the , resulting in the acquisition by the of the states of , , , , , and parts of , , and . Almost one-third of the present area of the American Nation, nearly a million square miles of territory, changed sovereignty."