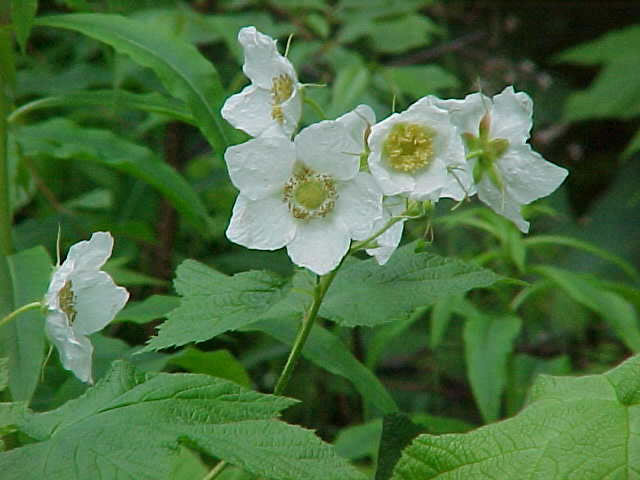 "Rubus parviflorus" (Thimbleberry) is a species of "", native to western and northern , from east to and , [cite web | url = http://plants.usda.gov/java/profile?symbol=RUPA | title = Rubus parviflorus Nutt. | publisher = USDA PLANTS ] and south to northern . It grows from sea level in the north, up to 2,500 m altitude in the south of the range. The plant is said to have given its name to the in , although it is very rarely seen in that region.

It is a dense up to 2.5 m tall with canes 3-15 mm diameter, often growing in large clumps which spread through the plant's underground . Unlike most other members of the genus, it has no thorns. The leaves are palmate, 5-20 cm across, with five lobes; they are soft and fuzzy in texture. The flowers are 2-6 cm diameter, with five white petals and numerous pale yellow stamens. It produces a tart edible composite 10-15 mm diameter, which ripen to a bright red in mid to late summer. Like other raspberries it is not a true , but instead an aggregate fruit of numerous s around a central core; the drupelets may be carefully removed separately from the core when picked, leaving a hollow fruit which bears a resemblance to a , giving the plant its name.

The species typically grows along roadsides, railroad tracks, and in forest clearings, commonly appearing as an early part of the in and areas.

Thimbleberry fruits are larger, flatter, and softer than raspberries, and have many small seeds. Because the fruit is so soft, it does not pack or ship well, so thimbleberries are rarely cultivated commercially. However, wild thimbleberries make an excellent which is sold as a local delicacy in some parts of their range, notably in the of . Thimbleberry jam is easily made by combining equal volumes of berries and sugar and boiling the mixture for two minutes before packing it into jars.

Thimbleberry plants can be propagated most successfully by planting dormant rhizome segments, as well as from seeds or stem cuttings.

In a pinch, the leaves of the thimbleberry are recognized as a handy "toilet paper". They are large, soft and non-irritating.