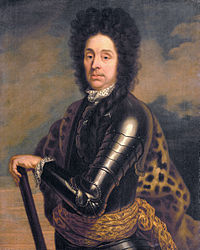 Menno, Baron van Coehoorn (March 1641 – March 17, 1704) was a Dutch soldier and military engineer of Swedish extraction. He made a number of influential weaponry innovations in siege warfare and fortification techniques. He was also known as the "Hollandish Vauban" (Hollandse Vauban), after his famous French counterpart Sébastien Le Prestre de Vauban.

Coehoorn was born in the city of Leeuwarden in the Dutch province of Friesland. He received an excellent military and general education, and at the age of sixteen became a captain in the Dutch army. During the Anglo-Dutch Wars, he took part in the defence of Maastricht in 1673 and in the siege of Grave in 1674, where he used the small mortars (called coehorns) invented by him to great effect against the French garrison. He was promoted to the rank of colonel for his gallant conduct at the battle of Seneffe (1674), and was also present at the Battle of Cassel (1677) and the Battle of Saint Denis (1678).

The circumstances of the time and the country turned Coehoorn's attention to the art of fortification, and the events of the late war showed him that existing methods could no longer be relied upon. Coehoorn gained most of his knowledge and insights on the building of fortification by having to capture many of them himself. His first published work, Versterchinge de Vijfhoeks met alle syne Buytenwerken (Leeuwarden, 1682), at once aroused attention, and involved the author in a lively controversy with a rival engineer, Louys Paan (Leeuwarden, 1682, 1683; copies are in the library of the Dutch Ministry of Defence). The military authorities were much interested in his work, and entrusted Coehoorn with the reconstruction of several fortresses in the Netherlands. This task he continued throughout his career and his experience made him the worthy rival of his great contemporary Vauban. He formulated his ideas a little later in his chief work, New fortress Construction (Nieuwe Vestingbouw op een natte of lage horisont, Leeuwarden, 1685), in which he laid down three systems, the characteristic feature of which was the multiplicity and great saliency of the works, which were calculated and in principle are still eminently suited for, flat and almost marshy sites such as those in the Low Countries. Essential to his new approach was the ability to fight an active defence on the outer shores of the enveloping ditch, made possible by constructing an extra protective wall around the fortification.

He borrowed many of the details from the works of his Dutch predecessor Freytag, of Albrecht Dürer, and of the German engineer Speckle, and in general he aimed rather at the adaptation of his principles to the requirements of individual sites than at producing a geometrically and theoretically perfect fortress. Throughout his career he never hesitated to depart from his own rules in dealing with exceptional cases, such as that of Groningen. Subsequent editions of Nieuwe Vestingbouw appeared in Dutch (1702, and frequently afterwards), English (London, 1705), French (Wesel, 1705), and German (Düsseldorf, 1709). Coehoorn's individual assessment of each fortification and focus on existing natural advantages and disadvantages is the main difference in thinking from Vauban, who adhered more strictly to mathematics and standard fortifications.

In the War of the Grand Alliance (1689–1697) Coehoorn served as a brigadier. At the battle of Fleurus he greatly distinguished himself, and he defended Namur, a fortress of his own creation, when it was besieged by the French in 1692. Namur was taken by Vauban; but the Dutch engineer had his revenge three years later in the Siege of Namur of 1695, when van Coehoorn retook Namur, despite Vauban having spent the interval improving the defences with his skill. Coehoorn became lieutenant-general and inspector-general of the Netherlands fortresses, and the high-German peoples as well as his own countrymen honored him. He commanded a corps in the army of the Duke of Marlborough from 1701 to 1703, and in the constant siege warfare of these campaigns in the Low Countries his technical skill was of the highest value. The swift reduction of the fortress of Bonn and the siege of Huy in 1703 were his crowning successes. At the opening of his following campaign he was on his way to confer with Marlborough when he died of apoplexy at Wijkel.