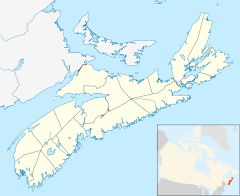 Mount Hanley is a Canadian rural community in Annapolis County, Nova Scotia. It is the birthplace of the famous mariner Joshua Slocum. 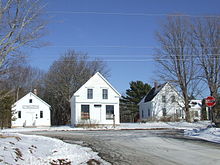 Mount Hanley is located about nine kilometers northwest of the town of Middleton. Mount Hanley occupies the north slope of the North Mountain facing the Bay of Fundy at an elevation of 150 metres above sea level.

The community was settled about 1784 mostly by United Empire Loyalists and is thought to be named after Rev. Thomas Hanley Chipman, a leader of the surrounding Wilmot Township. The name is recorded in various sources as Handely, Hanly, and Handly. In the 19th century the community’s farms and sawmills prospered, finding ready markets for their goods shipping from the nearby harbours on the Bay of Fundy at Cottage Cove and Port George. The community at one time boasted sawmills, blacksmiths, a grist mill, a cheese factory, blacksmiths, post office and general store. Some agriculture and forestry remain today although most residents work at jobs in the Annapolis Valley or are retired.

An original log school built in 1784 was replaced in 1850 and served until 1963 when rural schools were consolidated. The school is now the Mount Hanley Schoolhouse Museum. A Baptist church built in 1861 still sees seasonal services. Mount Hanley shares close links with the adjacent North Mountain communities of Outram, Port George and Moshers Corner and the four communities share a Recreational Centre at Port George.

Mount Hanley was the birthplace on February 20, 1844 of Joshua Slocum, the famous mariner who was the first to sail solo around the world and wrote the classic book Sailing Alone Around the World. Slocum learned to read and write at Mount Hanley School where today his origins are commemorated by a plaque and displays at the Mount Hanley Schoolhouse Museum. While at Mount Hanley, Slocum had his first experiences on the water on short schooner voyages from the near-by coves of Cottage Cove and Port George. He left Mount Hanley when he was eight years old when his family moved to Brier Island. Mount Hanley is also the birthplace of Clara Belle Marshall, the first woman to graduate from Acadia University in 1879.