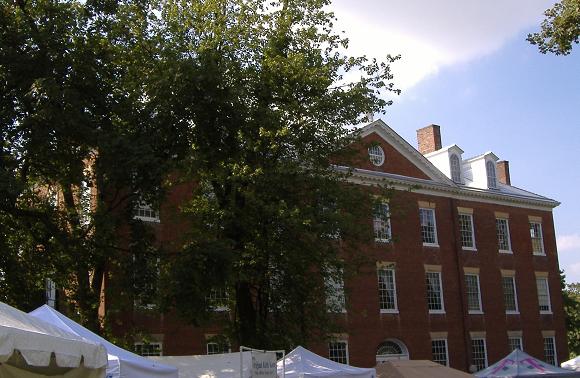 Bardstown is a city in Nelson County, , . The population was 10,374 at the 2000 census. It is the of Nelson County.GR|6 It is named for David Bard, the man who obtained the land for the city from the governor of , and his brother William Bard, the surveyor who laid out the town.

Bardstown was the first center of Catholicism west of the . [Jay P. Dolan, "The American Catholic Experience: A History from Colonial Times to the Present" (Notre Dame, Indiana: Notre Dame University Press, 1992), pp. 119, 160-61.] The was established on , , and served all Catholics between the Appalachians and the , an area now served by 44 s and s in 10 states. Its still stands as the . The seat of the diocese was transferred to Louisville in 1841. [Dolan, "American Catholic Experience", p. 161.] Bardstown is still the home of a Catholic high school, .

The Old Talbott Tavern, built in 1779 and located just off the Courthouse Square in the center of Bardstown, is another piece of Bardstown's rich history. Several notable American icons have passed through the tavern's doors, including and . [ [http://www.discoverourtown.com/KY/local-152530.html Discoverourtown.com - Old Talbott Tavern] ] Several bullet holes located in an upstairs wall are reputed to have been put there by Jesse James. [ [http://www.talbotts.com/html/history.html Talbotts.com - History] ] It's rumored that some of the people who stayed at the tavern in years past never checked out, even after death, as some people claim to have encountered ghosts or other paranormal activity at the tavern.

Bardstown is the home of . Here, Judge John Rowan and his wife Ann Lytle Rowan built "Federal Hill," the mansion that allegedly inspired 's song "". Federal Hill is depicted on the reverse of the Kentucky state quarter issued by the in 2001.

Several distilleries operate in and around Bardstown including , , and . The large amount of bourbon produced in the area gave rise to the annual and Bardstown the title "Bourbon Capital of the World". A public museum, the , showcases this aspect of local history.

Bardstown's downtown area is a historic district listed on the .

There were 4,195 households out of which 34.6% had children under the age of 18 living with them, 42.7% were married couples living together, 17.6% had a female householder with no husband present, and 35.6% were non-families. 31.2% of all households were made up of individuals and 10.9% had someone living alone who was 65 years of age or older. The average household size was 2.40 and the average family size was 3.00.

Bardstown, along with Nelson County, is part of the Louisville Metropolitan Statistical Area.

The is a limited-access highway that passes just south of Bardstown. A part of the Kentucky parkway system, the highway was formerly a , but tolls were removed in 1991 when enough tolls were collected to pay off its construction bonds.

freight service is provided by the , over the former Bardstown Branch of the . Corman operates "My Old Kentucky Dinner Train," a passenger train specializing in dinner service that travels the line from the historic Bardstown depot to Clermont and back.

*The Civil War Museum in Bardstown is the fourth-largest Civil War museum in the country. [http://www.visitbardstown.com/tourism/areasInterest/civilWar.htm]
*The celebrates Bardstown's history in the production of bourbon. It was designated 's official bourbon festival by the in 2000. [ [http://kdla.ky.gov/resources/KYSymbols.htm Kentucky State Symbols] ]
*, site of the mansion that inspired 's , "".
* celebrates Bardstown's history in the production of .
*"Stephen Foster - The Musical" an outdoor musical about , composer of "." It was designated 's official outdoor musical by the in 2002. [http://www.stephenfoster.com www.stephenfoster.com]
*The Greene County Sport Parachute Center west of Bardstown was one of the oldest continually operating s in the United States, existing from 1968 through July 15, 2007, when the lease for the land was not renewed. The primary jump plane was a 1955 , and held 8 jumpers at a time.
*, a private residence that has been the home of three Governors of Kentucky and open to the public for tours.
*A memorial to inventor John Fitch stands in Courthouse Square, complete with a replica of his first steamboat.