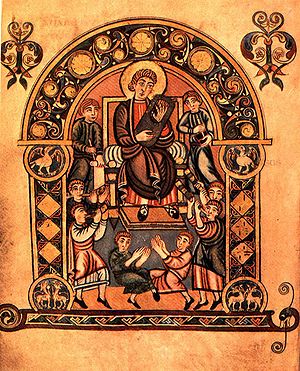 King David with his musicians.

The Vespasian Psalter (London, British Library, Cotton Vespasian A I) is an Anglo-Saxon illuminated Psalter produced in the second or third quarter of the 8th century. It contains an interlinear gloss in Old English which is the oldest extant English translation of any portion of the Bible. It was produced in southern England, perhaps in St. Augustine's Abbey or Christ Church, Canterbury or Minster-in-Thanet.

The psalter contains the Book of Psalms together with letters of St. Jerome, hymns and canticles. It was written in Latin on vellum, using a southern English Uncial script with Rustic Capital rubrics. There were additions made by a scribe named Eadui Basan in an English Carolingian minuscule. The English gloss was written in a Southumbrian pointed minuscule.

There are several major initials which are historiated, zoomorphic, or decorated. Major initials are found at the beginning of Psalms 1, 51 and 101. (This tripartite division of the Psalter is typical of Insular Psalters). In addition, the psalms beginning each of the liturgical divisions of the Psalter are given major initials. The beginning letters of the other Psalms have smaller "minor" initials which are decorated or zoomorphic and are done in what is called the "antenna" style. There is a miniature of King David with his court musicians on folio 30 verso. It is probable that this miniature was originally the opening miniature of the psalter. Sir Robert Cotton pasted a cutting from the Breviary of Margaret of York on folio 160 verso. He also inserted a miniature from a 13th century liturgical psalter as folio 1.

The Psalter belongs to a group of manuscripts from Southern England known as the Tiberius group, also including the Stockholm Codex Aureus, Barberini Gospels, the Book of Cerne, the Tiberius Bede, and the Book of Nunnaminster. The manuscript was produced during the second or third quarter of the 8th century, probably the earliest of the group. A date as early as 720 has been proposed by David Wright, but most scholars prefer a later date.[1] The script of the Old English gloss is typical of the script produced in Canterbury scriptoria from about 820 to 850. Eadui Basan, who made additions to the manuscript, was a monk at Christ Church, Canterbury during the early 11th century. Thomas of Elmham recorded a Psalter at Canterbury which may have been the Vespasian Psalter.

The manuscript was at Canterbury in 1553. It was subsequently owned by Sir William Cecil and Matthew Parker, Archbishop of Canterbury. By 1599 it was the possession of Sir Robert Cotton, who signed it on folio 12 recto. It became national property, along with the rest of the Cotton library in 1702 and was incorporated into the British Museum when it was founded in 1753. The volume was the first in the Vespasian shelf section in the part of the library indexed by the names from a set of busts of the Roman Emperors on top of the shelves.

Its current binding, with metal clasps, was provided by Cotton.