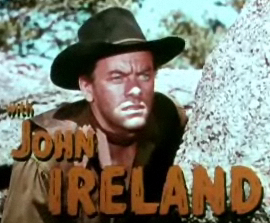 John Benjamin Ireland (, &ndash;, ) was an -nominated and sometime .

Born in , , he was raised in . He started out in minor stage roles on Broadway.

A tall, lean former Canadian professional swimmer who once performed in a water carnival, he appeared on Broadway and toured in in the late 1930s and early 40s before entering film in the mid-40s. He made his screen debut as Pvt. Windy, the thoughtful letter-writing GI, in the 1945 war film "". A supporting actor in several notable Westerns including 's "" (1946) and ' "Red River" (1948) and a lead in small noirs like "" (1947), Ireland was nominated for an Oscar as for his forceful performance as Jack Burden, the hard-boiled newspaper reporter who evolves from devotee to cynical denouncer of demagogue Willie Stark () in "All the King's Men" (1949), making him the first Vancouver-born actor to receive an Academy Award nomination.

Ireland's main reputation at the time was as a womanizer however, and it is reputed that even included the famous scene with Ireland and in "Red River" (1948) where they compare the size of their guns as a wink to his infamous physical endowments. Occasionally his name was mentioned in tabloids of the times, in connection with much younger starlets, namely , and . He attracted controversy by dating 16-year-old actress when he was 45.

A prolific performer in films and early TV, Ireland had made the transition to supporting roles by the mid-50s, playing cynical villains in films like "Vengeance Valley" (1951), "" (1956), "Spartacus" (1960) and "" (1962). Despite critical acclaim and a cult following, it seems his movie career was somewhat limited by Hollywood’s inability to stereotype his distinctively craggy, hulking appearance.

From 1960&ndash;1962 he starred in the British television series "The Cheaters", playing John Hunter, a claims investigator for an insurance company who tracked down cases of fraud. By the late 60s he was turning up as the star of and second-rate Italian productions like "The House of the Seven Corpses" (1974), "" (1976) and "Satan's Cheerleaders" (1977), as well as appearing in big-budget fare such as "The Adventurers" (1970).

Ireland regularly returned to the stage throughout his career and co-directed two features in the 1950s: the acclaimed western drama "Hannah Lee" (1953) and the carjacking B-movie "Fast and the Furious". He was married to actresses Elaine Sheldon (1940-49), (1949-56) by whom he had two sons, and Daphne Myrick Cameron (from 1962 until his death), with whom he had a daughter.

In his later years he owned a restaurant, Ireland's, in .

For his contribution to the television industry, John Ireland has a star on the at 1610 Vine Street.