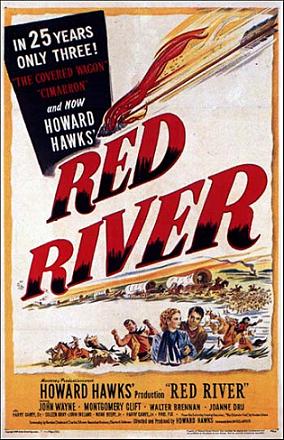 "Red River" is a 1948 Western film giving a fictional account of the first from to along the . The dramatic tension stems from a growing feud over the management of the drive, between the Texas rancher who initiated it () and his adopted adult son ().

The film was directed by and, in addition to Wayne and Clift, also starred , , , , John Ireland, , and . wrote the script with , based on Chase's story, "The Chisholm Trail."

Thomas Dunson () is a stubborn man who wants nothing more than to start up a successful cattle ranch in Texas. Shortly after he begins his journey to Texas with his trail hand, Nadine Groot (), Dunson learns that his love interest (), whom he had told to stay behind with the wagon train with the understanding that he would send for her later, was killed in an Indian attack. Despite this tragedy, Dunson and Groot press on, only to chance on an orphaned boy named Matthew Garth (played as an adult by ), whom Dunson effectively adopts. With only a couple head of cattle, Dunson and the boy enter Texas by crossing the Red River and Dunson proudly proclaims all the land about them as his own. Two Mexican men appear on horseback and inform Dunson that the land already belongs to their boss. Dunson dismisses this inconvenient fact, kills one of the men, and tells the other man to inform his boss that Dunson now owns the land. Dunson names his new spread the Red River D, after his chosen cattle brand for his herd. Fatefully, he promises to add M (for Matt) to the brand, once Matt has earned it.

Fourteen years pass and Dunson now has a fully operational cattle ranch. With the help of Matt and Groot, his herd now numbers over a thousand cattle, but he is also broke as a result of having been on the losing side in the . With the price of cattle in Texas not to his liking, Dunson decides to drive his massive herd hundreds of miles north to Missouri, where he believes they will fetch a much better price. After hiring some extra men to help out with the drive, they and cattle all set off on their perilous journey northwards. Along the way, they encounter many troubles, including a stampede caused when one of the men makes a sudden noise while trying to steal sugar from the chuck wagon.

Deeper problems arise when Dunson's tyrannical leadership style begins to affect the rest of the men and causes Matt to rebel. Eventually, Matt takes control of the drive in order to take it to the closer railhead in , leaving Dunson behind. This naturally infuriates Dunson, who vows to track down Matt and murder him.

On the way to Abilene, Matt and his men repulse an Indian attack on a wagon train. One of the people they save is Tess Millay (), who falls in love with Matt. Later she meets Dunson and offers to bear him a son if he'll let Matt live, but he refuses.

When Matt reaches Abilene, he finds men there who have been eagerly awaiting the arrival of such a herd to buy it; Matt happily accepts an excellent offer for the cattle. Unknowingly, he has just completed the first cattle drive along what would become the . Shortly thereafter, Dunson arrives in Abilene with a posse to follow through with his vow to kill Matt. The two men begin a furious fight, which Tess interrupts by drawing a gun on both men and demanding that they realize the love that they share for each other. Dunson and Matt see the error of their ways and make peace with each other. The film ends with Dunson telling Matt that he will incorporate an M into the brand as he had promised to do years before.

* as Thomas Dunson
* as Matthew 'Matt' Garth
* as Tess Millay
* as 'Groot' Nadine
* as Fen
* as Mr. Melville
*John Ireland as Cherry Valance
* as Buster McGee
* as Dan Latimer
*Chief Yowlachie as Quo
* as Teeler Yacey
* as Simms Reeves
*Ray Hyke as Walt Jergens
* as Old Leather
*Mickey Kuhn as Matt (as a boy)

Hawks had originally offered the role of Cherry Valance to Cary Grant. Grant, who had previously worked with Hawks as a leading man, declined the role because he did not deem it suitable or important enough. [cite video | people = Todd McCarthy | year = 2000 | title = His Girl Friday commentary track | url = http://www.imdb.com/title/tt0032599/dvd | format = | medium = DVD | publisher = Columbia Tristar | location = | accessdate = 2007-06-07 | time = 01:15:00 | quote = Hawks had offered a major role in "Red River" to Cary Grant--the gunslinger character of, Cherry Valance, played by John Ireland eventually--but, Cary Grant didn't think it was exactly suitable and wasn't really an important enough role so he turned that down.] appears uncredited as a dancer in a wagon train.

"Red River" was filmed in 1946 but not released until September 30, 1948, reportedly because threatened legal action against Hawks and , claiming "Red River" was too similar to Hughes' film "" starring .Fact|date=June 2007

Footage from "Red River" was later incorporated into the opening montage of Wayne's last film, "", to illustrate the backstory of Wayne's character.

The film was nominated for for Best Film Editing () and Best Writing, Motion Picture Story. In 1990, "Red River" was selected for preservation in the United States by the as being "culturally, historically, or aesthetically significant."