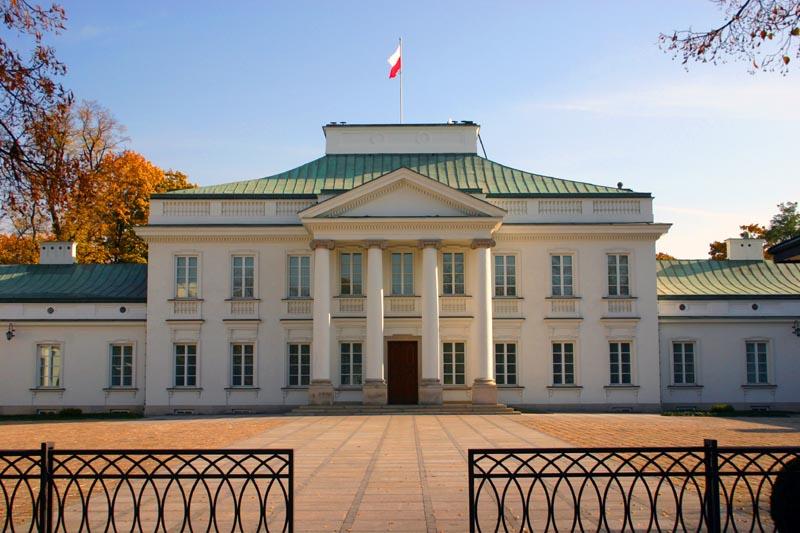 Belweder (IPA|/bɛlvɛdɛr/; Polish: "Pałac Belwederski", Belweder Palace, from the Italian "bello" and "vedere" — "beautiful" and "to see") is a palace in , a few kilometers south of the Royal Castle.

The present building is the latest of several that have stood on the site since 1660. Belweder once belonged to Poland's last king, , who used it as a porcelain-manufacturing plant.

From 1818 it was the residence of Russian Grand Duke Constantine, who fled it at the beginning of the November 1830 Uprising.

During World War II, the building was extensively remodeled for , Governor-General of the German-occupied "" of Poland.

Protection of the Belweder Palace by the Government Protection Bureau ("Biuro Ochrony Rządu", abbreviated "BOR") has been difficult, as the palace is located on a hill that shares a fence with the , located below, a major tourist attraction. For security reasons, the park has had to be partly closed during visits by foreign heads of state to the Belweder. Due to the size of Łazienki Park, this has proven difficult and time-consuming, and the Polish press has mocked Secret Service agents checking the bushes and disturbing the Park's peacocks.

Currently Belweder is used by the President and the Government for purposes, while the President resides at the "Governor's Palace" in the city center. It also serves as an official residence for heads of state on official visits to Poland and other important guests.

There have been plans to turn the Belweder Palace into a dedicated to Józef Piłsudski. Currently it houses a small exhibition devoted to the Marshal.