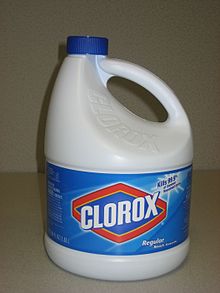 Bleach refers to a number of chemicals that remove color, whiten, or disinfect, often via oxidation. Common chemical bleaches include household chlorine bleach (a solution of approximately 3–6% sodium hypochlorite, NaClO), lye, oxygen bleach (which contains either hydrogen peroxide or a peroxide-releasing compound), and bleaching powder (calcium hypochlorite). The bleaching process was known to most ancient civilizations and has been around for thousands of years. Modern bleaches resulted from the work of 18th century scientists including Swedish chemist Carl Wilhelm Scheele, French scientists Claude Berthollet and Antoine Germain Labarraque, and Scottish chemist Charles Tennant.[1] Household chlorine bleach is created in two ways: by separating sodium hypochlorite from sea water or brine using electrolysis,[2] or by adding chlorine gas to sodium hydroxide which produces sodium hypochlorite, water and sodium chloride.[3]

Many bleaches have strong bactericidal properties, and are used for disinfecting and sterilizing.

Chlorine dioxide is used for the bleaching of wood pulp, fats and oils, cellulose, flour, textiles, beeswax, skin, and in a number of other industries.

In the food industry, some organic peroxides (benzoyl peroxide, etc.) and other agents (e.g., bromates) are used as flour bleaching and maturing agents.

Peracetic acid and ozone are used in the manufacture of paper products, especially newsprint and white Kraft paper.[4]

Two-part bleaches are utilized in the whitening of wood, especially oak.

A Risk Assessment Report (RAR) conducted by the European Union on sodium hypochlorite conducted under Regulation EEC 793/93 concluded that this substance is safe for the environment in all its current, normal uses.[5] This is owed to its high reactivity and instability. Disappearance of hypochlorite is practically immediate in the natural aquatic environment, reaching in a short time concentration as low as 10-22 μg/L or less in all emission scenarios. In addition, it was found that while volatile chlorine species may be relevant in some indoor scenarios, they have negligible impact in open environmental conditions. Further, the role of hypochlorite pollution is assumed as negligible in soils.

Hypochlorite and chlorine are in equilibrium in water; the position of the equilibrium is pH dependent and low pH (acidic) favors chlorine,[6]

Chlorine is a respiratory irritant that attacks mucous membranes and burns the skin. As little as 3.53 ppm can be detected as an odor, and 1000 ppm is likely to be fatal after a few deep breaths. Exposure to chlorine has been limited to 0.5 ppm (8-hour time-weighted average—38 hour week) by OSHA in the U.S.[7]

Sodium hypochlorite and ammonia react to form a number of products, depending on the temperature, concentration, and how they are mixed.[8] The main reaction is chlorination of ammonia, first giving chloramine (NH2Cl), then dichloramine (NHCl2) and finally nitrogen trichloride (NCl3). These materials are very irritating to the eyes and lungs and are toxic above certain concentrations.

Additional reactions produce hydrazine, in a variation of the Olin Raschig process.

The hydrazine generated can further react with the monochloramine in an exothermic reaction:[6]

Industrial bleaching agents can also be sources of concern. For example, the use of elemental chlorine in the bleaching of wood pulp produces organochlorines and persistent organic pollutants, including dioxins. According to an industry group, the use of chlorine dioxide in these processes has reduced the dioxin generation to under detectable levels.[9] However, respiratory risk from chlorine and highly toxic chlorinated byproducts still exists.

A recent European study indicated that sodium hypochlorite and organic chemicals (e.g., surfactants, fragrances) contained in several household cleaning products can react to generate chlorinated volatile organic compounds (VOCs).[10] These chlorinated compounds are emitted during cleaning applications, some of which are toxic and probable human carcinogens. The study showed that indoor air concentrations significantly increase (8-52 times for chloroform and 1-1170 times for carbon tetrachloride, respectively, above baseline quantities in the household) during the use of bleach containing products. The increase in chlorinated volatile organic compound concentrations was the lowest for plain bleach and the highest for the products in the form of “thick liquid and gel”. The significant increases observed in indoor air concentrations of several chlorinated VOCs (especially carbon tetrachloride and chloroform) indicate that the bleach use may be a source that could be important in terms of inhalation exposure to these compounds. While the authors suggested that using these cleaning products may significantly increase the cancer risk,[11] this conclusion appears to be hypothetical:

Further studies of the use of these products and other possible exposure routes (i.e., dermal) may reveal other risks. Though the author further cited ozone depletion greenhouse effects for these gases, the very low amount of such gases, generated as prescribed, should minimize their contribution relative to other sources.

Bleach is sold extremely concentrated and must be diluted to be used safely when disinfecting surfaces and when used to treat drinking water. When disinfecting most surfaces, 1 part bleach to 100 parts water is sufficient for sanitizing; stronger solutions may be used with caution.[13] In an emergency, drinking water can be treated: the ratio of bleach to water for purification is 2 drops of bleach per liter of water or 8 drops of bleach per gallon (3.79L) of water; 1/2 teaspoon bleach per five gallons (19L) of water. If water is cloudy, filter the water before adding the bleach. Let treated water stand covered for 15 minutes before drinking.[14] Additional bleach will not kill more bacteria and can endanger health.[15]

The active ingredient in bleach, hypochlorite ion, is produced by the following set of chemical reactions:

The H+ ion of the hypochlorous acid then dissolves into solution, and so the final result is effectively:

Hypochlorite tends to decompose into chloride and a highly reactive form of oxygen:

Colour in most dyes and pigments is produced by molecules which contain chromophores, such as beta carotene. Chemical bleaches work in one of two ways:

Sunlight acts as a bleach through a process leading to similar results: high energy photons of light, often in the violet or ultraviolet range, can disrupt the bonds in the chromophore, rendering the resulting substance colorless. Extended exposure often leads to massive discoloration usually reducing the colors to white and typically very faded blue spectrums.[17]

The broad-spectrum effectiveness of bleach, particularly sodium hypochlorite, owes to the nature of its chemical reactivity with microbes. Rather than acting in an inhibitory or toxic fashion in the manner of antibiotics, bleach quickly reacts with microbial cells to irreversibly denature and destroy many pathogens. Bleach, particularly sodium hypochlorite has been shown to react with a microbe's heat shock proteins, stimulating their role as intra-cellular chaperone and causing the bacteria to form into clumps (much like an egg that has been boiled) that will eventually die off.[18] In some cases, bleach's base acidity compromises a bacterium's lipid membrane, a reaction similar to popping a balloon. The range of micro-organisms effectively killed by bleach (particularly sodium hypochlorite) is extensive, making it an extremely versatile disinfectant. The same study found that at low (micromolar) sodium hypochlorite levels, E. coli and Vibrio cholerae activate a defense mechanism that helps protect the bacteria, though the implications of this defense mechanism have not been fully investigated.[18]

In response to infection, the human immune system will produce a strong oxidizer, hypochlorous acid, which is generated in activated neutrophils by myeloperoxidase-mediated peroxidation of chloride ions, and contributes to the destruction of bacteria.[19][20][21]