A chromophore is the part of a molecule responsible for its color. [1] The color arises when a molecule absorbs certain wavelengths of visible light and transmits or reflects others. The chromophore is a region in the molecule where the energy difference between two different molecular orbitals falls within the range of the visible spectrum. Visible light that hits the chromophore can thus be absorbed by exciting an electron from its ground state into an excited state.

In biology, molecules that serve to capture or detect light energy, the chromophore is the moiety that causes a conformational change of the molecule when hit by light.

Chemical structure of beta-carotene. The eleven conjugated double bonds that form the chromophore of the molecule are highlighted in red. 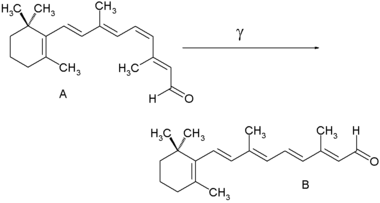 Conjugated chromophore that straightens in response to a photon γ (light), of the correct wavelength: 11-cis-retinal becomes all-trans-retinal

In the conjugated chromophores, the electrons jump between energy levels that are extended pi orbitals, created by a series of alternating single and double bonds, often in aromatic systems. Common examples include retinal (used in the eye to detect light), various food colorings, fabric dyes (azo compounds), pH indicators, lycopene, β-carotene, and anthocyanins. Various factors in a chromophore's structure go into determining at what wavelength region in a spectrum the chromophore will absorb. Lengthening or extending a conjugated system with more unsaturated (multiple) bonds in a molecule will tend to shift absorption to longer wavelengths. Woodward-Fieser rules can be used to approximate ultraviolet-visible maximum absorption wavelength in organic compounds with conjugated pi-bond systems.

The metal complex chromophores arise from the splitting of d-orbitals by binding of a transition metal to ligands. Examples of such chromophores can be seen in chlorophyll (used by plants for photosynthesis), hemoglobin, hemocyanin, and colorful minerals such as malachite and amethyst.

A common motif in biochemistry is chromophores consisting of four pyrrole rings. These come in two types:

An auxochrome is a functional group of atoms attached to a chromophore which modifies the ability of the chromophore to absorb light, altering the wavelength or intensity of the absorption.

In a pH range of about 0-8, the molecule has three aromatic rings all bonded to a tetrahedral sp3 hybridized carbon atom in the middle which does not make the π-bonding in the aromatic rings conjugate. Because of their limited extent, the aromatic rings only absorb light in the ultraviolet region, and so the compound appears colorless in the 0-8 pH range. However as the pH increases beyond 8.2, that central carbon becomes part of a double bond becoming sp2 hybridized and leaving a p orbital to overlap with the π-bonding in the rings. This makes the three rings conjugate together to form an extended chromophore absorbing longer wavelength visible light to show a fuchsia color.[2] At pH ranges outside 0-12, other molecular structure changes result in other color changes; see Phenolphthalein for details.