Citrus bergamia, the Bergamot orange, is a fragrant fruit the size of an orange, with a yellow colour similar to a lemon. Genetic research into the ancestral origins of extant citrus cultivars recently matched the bergamot as a likely hybrid of Citrus limetta and Citrus aurantium.[2] Citrus bergamot is a native hybrid of and commercially grown in Calabria, southern Italy, where more than 80% are found. It is also grown in southern France[3] and in Côte d'Ivoire for the essential oil. The fruit is not grown for juice consumption.[4][5]

Citrus bergamia is a small tree which blossoms during the winter. The juice tastes less sour than lemon, but more bitter than grapefruit. The distinctive aroma of the bergamot is most commonly known for its use in Earl Grey tea.[6] The juice of the fruit has also been used in Calabrian indigenous medicine to treat malaria,[7] and its essential oil is popular in aromatherapy applications.

The bergamot orange is unrelated to the herbs of the same name, Monarda didyma and Monarda fistulosa, which are in the mint family. The active ingredients in bergamot juice are neoeriocitrin, naringin, neohesperidin, ponceritin, melitidin, and brutieridin. Melitidin and brutieridin, only recently discovered, exist only in citrus bergamot, and exhibit statin-like properties.[8] Synephrine is not present in citrus bergamot.

Citrus bergamia is sometimes confused with (but is not the same as) Citrus medica (Citron, the yellow fruit of which is also known as Etrog). 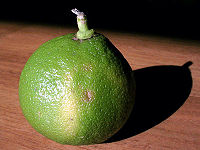 A bergamot orange from Calabria, Italy

Production mostly is limited to the Ionian Sea coastal areas of the province of Reggio Calabria, Calabria region in Italy, to such an extent that it is a symbol of the entire city. Most of the bergamot comes from a short stretch of land there where the temperature is favourable. It is also cultivated in Ivory Coast, but the quality of the obtained essence is not comparable with the essence produced from the bergamots of Reggio Calabria due to the argillite, limestone and alluvial deposits found there.[citation needed]

Adulteration with cheaper products such as oil of rosewood has been a problem for consumers. To protect the reputation of their produce, the Italian government introduced tight controls including testing and certificates of purity. During WW2, Italy was unable to export to countries such as the Allied powers. Rival products from Brazil and Mexico came on to the market as a substitute but these were produced from other citrus fruits such as sweet lime.[10] 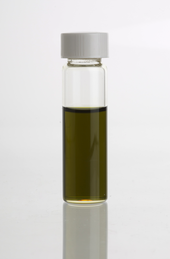 An essence extracted from the aromatic skin of this sour fruit is used to flavour Earl Grey and Lady Grey teas, and confectionery. An Italian food manufacturer, Caffé Sicilia in Noto, Syracuse, Sicily, produces a commercial marmalade using the fruit as its principal ingredient.[11] It is also popular in Turkey, Greece and Cyprus as a preserve, made with bergamot peel boiled in sugar syrup.[citation needed] In Sweden and Norway, bergamot is a very common flavorant in snus, a smokeless tobacco product.[citation needed] Likewise in dry nasal snuff it is also a common aroma in traditional blends.[citation needed]

The actual fruit of the bergamot orange itself is not known to be edible.[5]

Bergamot peel is used in perfumery for its ability to combine with an array of scents to form a bouquet of aromas which complement each other. Approximately one third of all men's and about half of women’s perfumes contain bergamot essential oil.[citation needed] Bergamot is a major component of the original Eau de Cologne composed by Farina at the beginning of 18th century Germany. The first record of bergamot oil as fragrance ingredient is 1714, to be found in the Farina Archive in Cologne. One hundred bergamot oranges will yield about three ounces of bergamot oil.[12]

Bergamot peel is also used in aromatherapy to treat depression and as a digestive aid.[citation needed]

Citrus bergamia has aromatic roots that are thought to mask other nearby plants from pests that attack their roots, and so are sometimes grown as a companion in vegetable gardens.

In several studies, application of some sources of bergamot oil directly to the skin was shown to have a concentration-dependent phototoxic effect of increasing redness after exposure to ultraviolet light (due to the chemical bergapten, and possibly also citropten, bergamottin, geranial, and neral).[13][14] This is a property shared by many other citrus fruits. Bergapten has also been implicated as a potassium channel blocker; in one case study, a patient who consumed four liters of Earl Grey tea per day suffered muscle cramps.[15]

Bergamot is also a source of bergamottin which, along with the chemically related compound 6’,7’-dihydroxybergamottin, is believed to be responsible for the grapefruit juice effect in which the consumption of the juice affects the metabolism of a variety of pharmaceutical drugs.[16]

Bergamot is used in many skin care creams and lotions which harness its cooling, refreshing nature. Bergamot is ideally suited to help calm inflamed skin, and as such is contained in some creams for skin conditions such as psoriasis[17]. It also has antiseptic properties which help ward off infection and aid recovery.

In the past, psoralen extracted from bergamot oil has been used in tanning accelerators and sunscreens. Psoralens penetrate the skin, where they increase the amount of direct DNA damage. This damage is responsible for sunburn and for an increased melanin production. It can also lead to phytophotodermatitis, a darkening of the skin as a result of a chemical reaction that makes the skin extra sensitive to ultraviolet light.

Bergamot essential oil has been found to reduce excitotoxic damage to cultured human neuronal cells in vitro, and may therefore have neuroprotective properties.[21]

Bergapten and citropten are strong inhibitors of IL-8 expression and may have potential to reduce lung inflammation in people with Cystic fibrosis.[22]

Citropten and bergapten are powerful inducers of differentiation and γ-globin gene expression in human erythroid cells, a potential therapeutic approach in hematological disorders, including β-thalassemia and sickle cell anemia.[23]