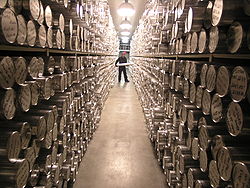 A section of the GISP2 ice core photographed at NICL

The National Ice Core Laboratory (NICL) located at the Denver Federal Center is the primary repository for ice cores collected by the United States. The facility is managed by the United States Geological Survey (USGS), and jointly funded by the USGS, National Science Foundation, and the University of New Hampshire. NICL currently houses ~14,000 m of ice cores collected from Greenland and Antarctica, including the GISP2, Siple Dome, and portions of the Vostok cores. The facility is also the lead organization for the handling and storage of the upcoming West Antarctic Ice Sheet ice core.

In addition to providing a large storage facility, maintained at -35 °C, NICL also has one of the largest sub-zero research and sample preparation spaces in the world. NICL is responsible for distributing samples of ice cores in their collection to researchers around the world, following approved research proposals.

In addition to research activities, NICL also participates in public outreach and gives ~100 tours per year.